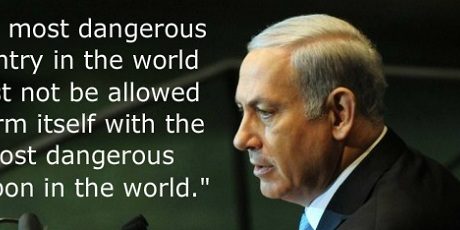 By BILLY HALLOWELL, THE BLAZE—

This afternoon, Israeli Prime Minister Benjamin “Bibi” Netanyahu addressed the United Nations General Assembly, spending the bulk of his time warning the world against a nuclear-equipped Iran. He challenged global powers to draw a “red line…before Iran completes the second stage of nuclear enrichment to make a nuclear bomb,” and spoke fervently against radical Islam.

While Iran was the overarching focus, Netanyahu opened the speech by proclaiming that Jerusalem is the capital of Israel — a fact that the Obama administration has come under fire by critics for continuously failing to acknowledge. But rather than poking at his Western ally, Netanyahu used the opportunity to deride the Iranian regime, which has repeatedly called for Israel’s destruction.

“I say that to all those who proclaim that the Jewish state has no roots in our region and that it will soon disappear,” he said of the Jerusalem mention, going on to herald his nation’s ability to survive the odds. “The people of Israel live on.”

The prime minister staked claim to Israel’s placement in the Middle East and said that “the Jewish people have come home” and that they “will never be uprooted again.” Similar to what Iranian President Mahmoud Ahmadinejad did with his own country on Wednesday, Netanyahu praised Israel’s successes in technology, medicine, agriculture and other spheres, while taking aim at more draconian nations.

At the heart of the address was the notion that radical Islam, whether it comes from Iranian leaders or the al-Qaeda and other radical groups, must be combated. Terrorist ideologies, Netanyahu contended, are a threat not just to Israel, but also to every nation on earth.

“The medieval forces of radical Islam…seek supremacy over all Muslims…they want to extinguish freedom,” he continued. “They want to end the modern world.”

Netanyahu drew no distinctions between Iran and al-Qaeda, claiming that “despite their differences, they are all rooted in the same bitter soil of intolerance.” Their angst and violence, the leader said, are aimed at Muslims, Jews, Christians, Hindus — essentially anyone who doesn’t submit to their will.

“Ultimately, they will fail. Ultimately, light will penetrate the darkness,” Netanyahu continued.

In recalling memories from the not-so-distant past, the Israeli prime minister mentioned the lessons that the world learned from the Holocaust. While the international community sat and waited to address Adolf Hitler’s “fanatical ideology,” millions of people perished. Netanyahu urged the world not to let this happen again and claimed that the Iranian threat creates a parallel worth paying attention to.

“To understand what the world would be like with a nuclear-armed Iran, just imagine the world with a nuclear armed al-Qaeda,” he continued, at one point holding up an image of a bomb to illustrate that the problem must be stopped before it’s too late.” Given this record of Iranian aggression without nuclear weapons, just imagine Iranian agression with nuclear weapons.”

Netanyahu also addressed Israel’s relationship with the U.S., at some points thanking Obama for his cooperation in terms of speaking out against Iran and supporting crippling sanctions. But while the Iranian economy has been hard-hit, Netanyahu said that the actions have failed to halt nuclear ambitions.

“We share the goal of stopping Iran’s nuclear weapons program,” he said of the U.S. and Israel’s joint concern. “Israel is in discussions with the United States on this issue and I am confident that we can chart a path…together.”

Watch the speech, below: