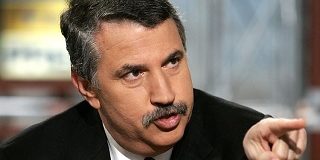 In a 1977 Supreme Court opinion, Thurgood Marshall, the court’s first African-American justice, observed, “Social scientists agree that members of minority groups frequently respond to discrimination and prejudice by attempting to disassociate themselves from the group, even to the point of adopting the majority’s negative attitudes towards the minority.”

Marshall further noted that “such behavior occurs with particular frequency among members of minority groups who have achieved some measure of economic or political success and thereby have gained some acceptability among the dominant group.” In fact, such behavior is particularly common within minority group elites more broadly; not only those to whom Marshall refers but also, for example, academic, artistic and journalist elites. In addition, it is more common not simply among those who have achieved elite status but also those who aspire to such status.

Of course, not all members of these elites within minorities embrace the wider society’s bigoted indictments of their own group; nor is the embrace of those indictments limited to the besieged community’s elites. But elites typically play an especially prominent role in this phenomenon.

In the context of Jewish experience, this has been a recurrent pattern throughout the history of the Diaspora and has figured in Israeli history as well. (Virtually all the psychological characteristics of minorities chronically denigrated, marginalized, and otherwise targeted by surrounding majorities are found as well within the populations of small states chronically besieged by their neighbors.)

The Oslo process of the 1990′s is illustrative. The path to Oslo was paved by journalists, academics, novelists, purveyors of other arts, and elements of the political elite who argued that the Palestinian-Israeli, and the broader Arab-Israeli, conflict remained unresolved because Israel had failed to make sufficient territorial and other concessions. If Israel would only return essentially to the pre-1967 armistice lines and were also more forthcoming in other ways, they argued, peace would be achieved. By the early 1990′s they had won about half of Israel’s population to variations of this view.

In doing so, they ignored the reality that throughout this same period, as well as in the wake of the initial Oslo accords of 1993, Yasser Arafat and his followers continued to tell their constituency that their goal was Israel’s annihilation and continued to promote terror to achieve that goal. During the years of Oslo, the editors and journalists of Israel’s three Hebrew dailies failed to report on the incessant defamation of Israel and calls for her extermination that permeated not only speeches by Arafat and his associates but broadcasts of Palestinian media more generally as well as sermons in Palestinian mosques and curriculum in Palestinian schools. The upsurge of terror that followed the initial Oslo accords was downplayed by the Israeli political leadership that had championed the Oslo process. Israeli academics, both immediately before and during the Oslo years, created a bogus “New History” that rewrote Israel’s past in a manner supporting the delusions of Oslo, the claims that Israeli missteps were perpetuating the conflict and Israeli concessions would resolve it. Israeli novelists, dramatists, film makers, as well as painters and others in the plastic arts, promoted the same delusions. A similar pattern of distortions characterized the work of many Jewish community leaders, journalists, academics, and artists in the Diaspora.

The reason so many Israelis followed the nation’s elites and embraced Oslo’s rationales is not difficult to fathom. Their doing so reflected the nation’s desire for peace and people’s wish to believe themselves in control of circumstances over which, in reality, they had, and have, no control. Both then and now, Palestinian and broader Arab media, mosques and schools purvey not simply the message that Israel must be destroyed but a broader, genocidal anti-Semitism. This is true as well in parts of the Muslim world beyond the Arab states. Peace will come only when internal political changes in these domains translate into abandonment of the drumbeat for killing Jews and annihilating Israel. It will come on the Arabs’ timetable. In fact, Israeli actions have little impact on this reality. Israel can neither appease its way to peace nor fight its way to peace. At best, it can deter aggression and suppress aggression when deterrence fails.

But for many, this lack of control over circumstances so central to their well-being is intolerable. The psychological response is like that of chronically abused children, who almost invariably blame themselves for their predicament. They choose to believe they are abused because they have been “bad” and that if they only become “good” the abuse will end. They do so, enduring the pain of the self-indictment, because the delusion preserves a sense of control over circumstances that are in reality beyond their control. Similarly, elements of minorities abused by the surrounding majority and small states besieged by their neighbors choose to embrace comparable delusions rather than acknowledge their helplessness to end their besiegement.

Even the dramatic upsurge in terror that accompanied the first years of the Oslo process had only limited impact on public support for the accords. It was not until Arafat, in 2000, rejected all compromise at Camp David, offered no counter-proposals, and instead launched his all-out terror war – which in the ensuing few years claimed another thousand Israeli lives and maimed thousands more – that Israelis in large numbers abandoned their Oslo delusions. Still more gave up their wishful thinking when Israel’s full withdrawal from Gaza in 2005 led only to more terror, much of it in the form of thousands of rockets targeting Israeli communities from the evacuated territory.

But hardly all Israelis have turned away from their Oslo delusions, and it is – perhaps even more than earlier – particularly elements of the elites that continue to embrace the argument, for example, that Israel does not require defensible borders. It is disproportionately members of the elites who insist return to the pre-1967 armistice lines will bring about a peace that will render “defensible borders” unnecessary, and that therefore it is Israeli intransigence that perpetuates the conflict.

The embrace of the indictments of one’s besiegers does not necessarily take the form of seeking to reform one’s community in accordance with those indictments, seeking to appease the besiegers in this way. It can also entail seeking to distance oneself from the community – to, as Thurgood Marshall put it, “disassociate themselves from the group” – to spare oneself the pain of the besiegement. And it is members, or those who aspire to be members, of the elites that disproportionately choose the path of distancing themselves from Israel’s predicament.

This is so because it is disproportionately members, or would-be members, of the elites who aspire to acceptance by circles beyond the nation, circles that have their own biases against Israel and its Jewish supporters. It is members, or would-be members, of the elites who choose to identify themselves less as Israelis and more as academics, writers, other artists, journalists, eager for the approval of their peers abroad and aware that being critical of Israel, whatever the reality of the nation’s predicament, is a surer path to that approval. It is disproportionately the academic defamers of Israel who get the visiting lectureships in Europe and elsewhere, including in the United States. It is the novelists and film-makers and journalists most critical of Israel who are awarded prizes and feted in Europe and elsewhere. It is the Israeli NGO leaderships most given to defaming the nation and promoting the indictments of its enemies, however bigoted and absurd, that are most showered with encomiums and lavish funding by governments in Europe and foundations in America.

A similar phenomenon can be seen in the American Jewish community. Today, polls of American Jews show them overwhelmingly sharing the concerns of the great majority of Israelis regarding the threats Israel faces from Iran, with its calls for Israel’s annihilation and its advancement towards nuclear weapons. They likewise share Israeli wariness vis-a-vis a Palestinian leadership, and Arab states, that employ their media, mosques and schools to promote genocidal anti-Semitism and its corollary demonization of Israel and exhortation to pursuit of the Jewish state’s destruction. Yet a notable portion of American Jewish elites, including elements of Jewish community leadership but more particularly numbers of those within academia, journalism and the arts, choose to downplay the threats faced by Israel, disparage anyone who emphasizes those threats, and insist that Israeli refusal to make sufficient concessions is the chief obstacle to Middle East peace. They do so not least to ingratiate themselves with and cement acceptance by those groups with which they identify and whose approval they seek.

One might wonder why Thomas Friedman has for decades written, in column after column, that Israel’s unwillingness to return essentially to its pre-1967 armistice lines is the primary cause of continuation of the Arab-Israeli conflict, and why he has, over those decades, generally ignored or downplayed Palestinian and broader Arab rejection of Israel’s legitimacy and incessant incitement to the Jewish state’s destruction. One might be still more puzzled by his recent parroting of hoary anti-Semitic tropes, his insistence that if Congress gives a warm welcome to Israel’s prime minister and if some American leader endorses pro-Israel stances that are, in fact, widely shared among Americans, they must do so because they have been “bought and paid for” by Jewish money.

One might wonder why another Jewish journalist, Peter Beinart – even as he repeatedly declares his devotion to Israel’s well-being – either makes light of the threats Israel faces or acknowledges them only to construe them as a product of Israeli policies; why he devotes an entire book to indicting Israelis for their reluctance to make greater concessions to those who would destroy them.

Could it be that Friedman and Beinart essentially identify with Israel and, like the abused child, are primarily moved by a wish to embrace, in the face of painful circumstances, fantasies of Israeli control over those circumstances, however removed from reality such fantasies may be; that their writings are expressions of wishful delusions that Israel, by its own actions, can end its besiegement? Or are they moved primarily by a wish to distance themselves from a besieged Israel and choose to identify with groups whose members are more inclined to be detractors of the Jewish state?

It is perhaps not insignificant, as evidence of what most motivates them, that both Friedman’s columns and Beinart’s book are published by the New York Times, which for over a century has sought to distance itself from Jewish travails. The paper did so most notoriously in the 1930′s and during World War II, including burying stories on the mass murder of Europe’s Jews. And it has likewise either ignored the genocidal anti-Semitism that pervades Palestinian and broader Arab culture, as well as that of much of the wider Islamic world, or has noted others’ concerns about this Jew-hatred only to downplay or dismiss such concerns or even to ridicule them.

In understanding a Friedman or a Beinart, the more germane explanation is likely that reflected in Thurgood Marshall’s reference to the predilection of some within besieged groups to distance themselves from their group, and Marshall’s recognition that – expanding on his particular examples – this is especially common among those eager to win and maintain approval by parties not notably sympathetic to the besieged.