Israel and the Jewish Left 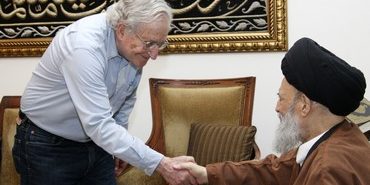 Jewish support for the enemies of Israel represents the triumph of leftism over Jewishness. —

Among its many critics, there is a startling number of Jews who calumniate Israel and, in some cases, champion those threatening its existence. Noam Chomsky heads this list, but he is hardly alone. Norman Finkelstein, Ilan Pappe, Richard Falk, Tony Judt, Howard Zinn, Eric Hobsbawm and many other Jews have joined in this project. Gabriel Schoenfeld’s explanation of this in The Return of Anti-Semitism is straightforward: amid a rising tide of anti-Semitism, Jewish enemies of Israel are out to save their own skins, aiming “to deflect the poisonous arrows coming at their fellow Jews.” In The Oslo Syndrome: Delusions of a People Under Siege Kenneth Levin asks: “Why are Jews so self-destructive? So suicidal?” He argues that constant oppression can lead to a variant of the Stockholm Syndrome: “empathy for and emotional bonding with the aggressor.” The logic of this “embrace by members of an abused community of the indictments of their abusers” is that this allows the possibility of “salvation self-reform and concessions.”

In Jews and Power Ruth Wisse argues that self-blame is a Jewish tradition: “the very nature of Talmudic debate turns the political focus inward, away from the enemy and towards its own constituency.” She describes a Jewish tendency to respond to military defeat as “a consequence of God’s dissatisfaction with his people.”

In The War Against the Jews Lucy Dawidowicz cites Orthodox rabbis who saw the Holocaust as God’s punishment and called for repentance – teshuva – not resistance, in the belief that “because of our sins we have been punished.”

In addition to these psychological and cultural factors, it is essential to recognize that hostility to Israel and support for Islamic radicalism is mainly a phenomenon of the hard left. Hugo Chavez, Fidel Castro and Daniel Ortega have pledged solidarity with radical Islam, the latter proclaiming that “the revolutions of Iran and Nicaragua are almost twin revolutions.”

This sentiment can be found on the social-democratic left. Yasser Arafat was embraced by Austria’s Social-Democratic Chancellor Bruno Kreisky and West Germany’s Willy Brandt. Ken Livingston, former Labour Mayor of London, has defended Palestinian terrorism: “in an unfair balance that’s what people do.”

Those who are surprised by these examples, in the belief that secular leftists and fascist theocrats are natural enemies, do not know the long history of to-ing and fro-ing between socialism and fascism. Benito Mussolini, Oswald Moseley (head of the British Union of Fascism), and Vidkun Quisling began their political lives as socialists.

According to Tom Weber’s Hitler’s First War, Hitler flirted with German communists in the 1920s and this affinity endured. French historian Francois Furet cites Hitler’s assertion that “there is more that binds us to Bolshevism than separates us from it… the petit bourgeois Social Democrat and the trade-union boss will never make a National Socialist, but the Communist always will.”

This sentiment was reciprocated by the German Communist Party which “sought to dissociate the Nazi voters from the leaders of the movement so as to regain them for the Communist Revolution.” The Hitler-Stalin pact was not an anomaly.

The collaboration between the radical left and the radical right has included radical Islam. Amin al-Husseini, despite his virulent anti-Semitism, was supported by the Palestine Communist Party until he joined the Nazi cause. The Muslim Brotherhood was funded by the Nazis. Arafat was sponsored by the Soviets and the Iranian Communist Party supported the Khomeini revolution that soon devoured it.

This intertwining of communists, fascists and Islamists explains why “in Germany, neo-Nazis and radical leftists wearing kaffiyas march together in anti-American demonstrations and chant the same slogans against globalization and waving the same Hezbollah flags.”

Redmond O’Neill, a senior aide to “Red Ken” Livingstone, suggested that: “Muslims and the left must and can come together because we have the same enemies – imperialism, colonialism, and racism.”

This outreach has been reciprocated. Recommending the writings of Noam Chomsky, Osama bin Laden has said: “The interests of Muslims and the interests of the socialists coincide in the war against the crusaders.”

Paul Berman argues in Terror and Liberalism that the radical left and right are drawn together by millennialism, the belief that that “the war of Armageddon – the all-exterminating bloodbath” is the path to utopia. The holy warriors of radical Islam strike a chord with these impulses.

Anti-Semitism – “the socialism of fools” – also draws elements of the radical left to Islamofascism. Racial and religious anti-Semitism is anathema to the left. But Islamic radicalism offers a new wineskin for some very old wine.

The radical left and right also share disdain for the materialism and competitive individualism of capitalist society. Echoing the left, Hitler decried America’s “grasping materialism and indifference to any of the loftiest expressions of the human spirit.”

Sayeed Qutb, a theorist of the Muslim Brotherhood, was similarly appalled by America’s “mixture of materialism, lust, and egoistic individualism” and denounced “the maldistribution of capitalist societies.” Articulating themes that the left calls alienation, he decried “the miserable split between material excellence and spiritual fulfillment.”

If we add to these affinities the aim to empower a privileged elite – the vanguard of the proletariat, the Aryan race, or Islamist theocrats – the left-Islamist alliance is not the anomaly it appears; they are brothers under their rhetorical skin.

Mussolini et al. moved from socialism to fascism and Chomsky has moved from support for Pol Pot to advocating for Hassan Nasrallah, head of Hezbollah. Carlos the Jackal, imprisoned for political murders as a Marxist, became a Muslim in prison in the belief that revolutionary Islam “attacks the ruling classes in order to achieve a more equitable redistribution of wealth.”

The legacy of oppression and the tradition of self-blame described by Levin and Wisse have eroded the barrier that being Jewish ought to have created against joining their comrades in assaulting the Jewish state. In some cases, like Chomsky’s collaboration with holocaust deniers, what Schoenfeld describes as “the murky waters of the psychosocial” must play a role.

But the core of Jewish animus towards Israel emerges from the left. As much as the fear of anti-Semitism adduced by Schoenfeld, Jewish enemies of Israel fear the opprobrium of their comrades. As Robert Wistrich has put it, on the left: “Israel-bashing is clearly the contemporary key to acceptance.”

The peculiarities of Jewish history and culture have combined with the left’s attraction to totalitarianism – left or right, secular or sacred – that has now been stripped of the veneer of progressive values. Jewish support for the enemies of Israel represents the triumph of leftism over Jewishness.

The author is professor emeritus at the Department of Sociology, University of Illinois at Chicago