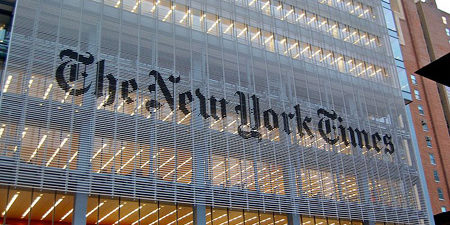 So it works out that Iran’s vice president really hates Jews. In fact, he hates Jews so much that even The New York Times reported it. On Tuesday, the Times published an account of Iranian Vice President Mohammad-Reza Rahimi’s speech before a UN forum on fighting drug addiction in Tehran.

Rahimi claimed that Jews control the illegal drug trade. We sell drugs, he said, in order to fulfill what he said is a Talmudic writ to “destroy everyone who opposes the Jews.”

He said that our conspiracy is obvious since, he claimed, there are no Jewish drug addicts.

He went so far as to promise to pay anyone who can find a Jewish drug addict.

As he put it, “The Islamic Republic of Iran will pay for anybody who can research and find one single Zionist who is an addict. They do not exist. This is the proof of their involvement in drugs trade.”

Some of his best friends are Jews.

At least that is what the Times would have us believe. As reporter Thomas Erdbrink put it, “‘Zionists’ is Iran’s ideological term for Jews who support the state of Israel.”

He also helpfully noted, “More than 25,000 Jews live in Iran, and they are recognized as a religious minority, with a representative in Parliament.”

Aside from that, just so we don’t get the wrong impression about the Iranian government, Erdbrink calmed us down by noting, therapeutically, “Several Iranian ministers gave politically neutral briefings on the impact of the drug trade on the country.”

So aside from the fact that its vice president is a frothing-at-the-mouth anti-Semite, the Iranian regime is perfectly respectable. Nothing to see here folks, move on.

Except, of course, that this is not the case.

Iran’s “Supreme Leader” routinely refers to Israel as a cancer. For instance, in a sermon before thousands of Muslim worshipers in February, Ali Khamenei said, “The Zionist regime is a cancerous tumor and it will be removed.”

Then there’s Rahimi’s direct boss, President Mahmoud Ahmadinejad, who can’t ask what the weather is like without calling for the annihilation of the Jewish people.

But then he too usually calls us Jews “Zionists,” (which most of us are), so his calls for the genocide of Jewry is really just a political statement and not proof that what moves him when he wakes up in the morning and goes to bed at night is a passionate, obsessive desire to murder an entire people.

Many commentators seized on Erdbrink’s write-up of Rahimi’s diatribe as further proof that the civilized world cannot permit Iran to acquire nuclear weapons. And that is fair enough.

Of course Iran cannot be permitted to acquire nuclear weapons. They are religious fanatics who rule under a deranged banner of messianic genocide.

BUT THE real issue here is that these commentators felt it necessary to seize on the Times’ write-up of Rahimi’s speech to make this obvious point. That is, the real issue here isn’t the Iranians. The real issue is the Western media. From the New York Times to the BBC to the European media, Jew-hatred is the most under-reported – and arguably most important story – of our times.

No issue unites the Muslim world more than venomous, murderous hatred of Jews.

No single issue informs their foreign policies more than hatred of Jews. And yet, reporting – even biased, misleadingly understated reporting – of this massive, strategically pivotal phenomenon is almost nonexistent in most major media outlets. As a consequence, it is a major event when the Times finally publishes an anemic report about it. And again, even that report hides the real story.

Erdbrink ended his report by quoting an unnamed European diplomat who was in Rahimi’s audience at the conference. The diplomat told him that on the one hand, “This was definitely one of the worst speeches I have heard in my life. My gut reaction was: Why are we supporting any cooperation with these people?”

But, lest we reach any policy conclusions from Rahimi’s bigotry, the diplomat soothed, “If we do not support the United Nations on helping Iran fight drugs, voices like the one of Mr. Rahimi will be the only ones out there.”

What both Erdbrink and his European interlocutor failed to acknowledge is that Rahimi won’t be punished for his views. He was promoted because of his views. Helping Iran fight drugs doesn’t encourage non-genocidal Iranian politicians. It legitimizes the regime that promoted Rahimi and Ahmadinejad and Khamenei and every other powerful politician and military commander because of their hatred of Jews.

The Western media has two basic approaches to their non-reporting of Islamic Jew-hatred and its significance for international security. The first approach is to ignore the issue because it is ideologically inconvenient.

The New York Times, like every other major Western media outlet except The Wall Street Journal, is of the opinion that the Islamic world should be appeased. The Muslim Brotherhood and Iran should be accommodated.

If they gave Islamic Jew-hatred coverage commensurate with its actual significance, they would be undermining their ideological agenda. In light of their ubiquitous and vituperative obsession with Jewish people, it is obvious that it is impossible to appease the Muslim world.

The second approach to contending with Islamic Jew-hatred is to justify it by claiming that Israel has earned all the hate coming its way. It’s “political” they say. The Islamic demonization of Jews is understandable given the Palestinians and all that.

Obviously, both of these approaches to the story of Islamic Jew-hatred are appalling. The former approach involves a breach of the very concept of objective journalism. After all, the purpose of journalism is to report on the world as it is, not as we would like it to be.

And the latter approach is no less bigoted than the hatred it serves to whitewash. The European diplomat’s gut reaction to Rahimi’s speech, “Why are we supporting any cooperation with these people?” was entirely rational.

AND IF Rahimi’s hatred had been directed against any other people, race, creed, state or color, no one would support cooperation with “these people.”

No one would support the Palestinian national movement if its inherent, overwhelming hatred was directed, say, against the black state rather than the Jewish state.

Demonizing and delegitimizing Israel is the core goal of the Palestinian national movement.

To this end the Palestinian Authority’s Information Ministry published a style guide to instruct Palestinians what terms they should use to avoid legitimizing Israel.

According to Palestinian Media Watch’s report about the style guide, language must be chosen that will avoid presenting Israel’s existence as “natural.” As the book’s introduction explains, using Israeli terminology “turns the essence of the Zionist endeavor (i.e., Israeli statehood) from a racist, colonialist endeavor into an endeavor of self-definition and independence for the Jewish People.”

Among its other guidelines, the PA’s style guide tells Palestinians to replace the term “Star of David,” with “six-pointed star.” And this makes sense. The term “Star of David” exposes the Jews’ national rights to the Land of Israel. After all, this is the land of the Jewish King David who founded the Jewish capital of Jerusalem three thousand years ago.

But a central goal of Palestinian propaganda, and advanced by all relevant sectors of Palestinian society, is to rewrite history and erase the Jews from the history of the Land of Israel.

And rather than call them on this intellectual crime of literally biblical proportions, the Western media collaborates with them. For instance, on Tuesday, the New York Times published an article about the efforts of the Palestinians from Battir, an Arab village southwest of Jerusalem, to have their ancient terraced irrigation system recognized as a UNESCO World Heritage Site. They claim the designation is necessary and urgent because if they don’t get it, Israel may build a portion of the security barrier through the village and harm the irrigation system.

But as the bloggers Yisrael Medad and Elli Fischer pointed out, it is a Jewish irrigation system from the Second Temple period. And while Battir is a reasonable candidate for World Heritage Site status, it is first and foremost a Jewish heritage site. Battir is the Arab name for the ancient Jewish village Betar, the site of Bar- Kochba’s last stand against the Roman Empire.

It is the last place where Jews were sovereign until the establishment of the State of Israel.

But Kershner didn’t mention any of that.

Doing so would lead to too many inconvenient truths – about the nature of Palestinian nationalism, about UNESCO, about Jewish rights to the land. So the historical significance of Battir was left unreported, and the nature of the irrigation system was reported incorrectly.

On the face of it, it can be argued that the Western media’s willful blindness towards Islamic Jew-hatred and its influence on world affairs are part and parcel of the Western elite’s collective refusal to recognize and contend with the implications of the phenomenon.

But this is too forgiving.

Policy-makers who ignore Islamic Jew-hatred are doing so because they are trying to sell their policies. What’s the New York Times’ excuse?

And this leads us back to the well-meaning commentators who seized on Erdbrink’s report about how Iran’s vice president believes that Jews – sorry Zionists – are monsters, and used it as proof that Iran cannot be permitted to get the bomb. Yes, of course, they are right that it is worth re-quoting his vile remarks to make the point.

But by quoting the Times, they may be scoring a couple of tactical points today, but they are losing a long-term strategic battle. They are giving respectability to a media organ that is consummately unworthy of our respect. They are giving respectability to a news organ with an institutional policy of denying, underreporting, and misleadingly reporting about the most important issue that shapes events in the Middle East today: Islamic hatred of Jews.