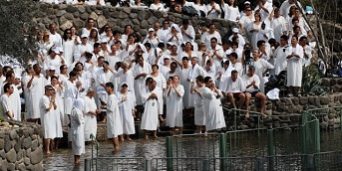 Elisa Moed, originally from Detroit, immigrated to Israel in 2005.  A phone call from the Vatican isn’t a typical source of inspiration for an American Jewish immigrant to Israel. But for Elisa Moed, it was a call from the Israeli representative of the Holy See that sparked her to create the website Travelujah – an Internet venture aimed at Christian tourists planning a visit to the Holy Land.

With years of experience as a corporate consultant specializing in new and emerging tourist destinations, Moed – a Detroit native now in her 40s – got
the call six months after she moved to Ra’anana in 2005. The Catholic Church owned a piece of land in the Galilee and was interested in building
a guesthouse there, and it wanted to hire Moed as a consultant to research its commercial potential.

As Moed worked on the project, delving into the topic of Christian tourism to Israel and the surrounding destinations that comprise “the Holy Land,” two things became clear.

First, she saw that the potential for dramatically increasing the number of Christians visiting the region was tremendous. Second, she understood from her
research that there was a real need for a single, comprehensive, updated source of information on the web where potential Christian pilgrims could find and share information necessary to make the trip.

“I thought that if I was having trouble navigating so many websites in order to find the relevant information I wanted, I could only imagine how frustrating it would be for an individual or a pastor living in Tulsa, Oklahoma, who was interested in planning their own Holy Land tour,” says Moed.

“That’s when I got the idea of creating a one-stop shop for dedicated Christian resources for people like them.”

Travelujah is a content-oriented site focused exclusively on Christian tourism to the Holy Land. What sets the three-year-old site apart from other online destinations, according to Moed, is her decision to make it as interactive as possible, and her aim to create a “dynamic community” of travelers who can get advice and tips not only from travel operators and experts, but from each other.

This particular segment of tourists, according to Moed, is made up of extremely careful shoppers. “Coming to Israel on a faith-based journey is not an impulsive purchase. It is something people dream about for years and they want to plan their experience carefully,” she says.

A wiry, athletic mother of four, Moed lives with a foot in two worlds. After seven years in Ra’anana, she and her family are well-absorbed into mainstrea Jewish suburban life in Israel. But she feels just as comfortable interacting with Christians, she says, easily speaking their language as she discusses how they “share blessings,” “experience fellowship” and “feel God’s spirit.”

Moed’s ability to navigate between cultures began early. Growing up in Detroit, there were few Jews in her school, she says, and she celebrated Christmas and Easter at her friends’ homes. Yet her family was deeply Jewish and Zionist.

It was while traveling in Israel that Moed first became inspired to go into tourism. After living and working in Israel after college, she decided to return to the United States to get a master’s degree in the hospitality industry, with an eye toward moving back to Israel and working in hotels. But then she began her international consulting career, which took her to Europe, Asia and the Caribbean. Finally, “20 years later than I planned,” she laughs, she made the move to Israel.

With her experience, it didn’t take much research for her to see that Israel “hasn’t scratched the surface” of its ability to develop the Christian market for tourism. There are 1.5 billion Christians worldwide and only a tiny fraction of them have ever made a pilgrimage, according to Moed.

Over the last several years, faith-based travel to destinations worldwide, including Israel, has grown significantly, she says. In 2004, Israel welcomed 440,000 Christian tourists, Moed says, and by 2011, 2.3 million Christians visited Israel, representing an annual growth rate of more than 26 percent. The Internet has also multiplied the number of Christians traveling independently to the Holy Land. And these independent travelers, says Moed, are her target audience for Travelujah. Users can use the site to book a full tour or several day-trips, and it has a reservations system for 36 Christian-run guesthouses across the country. Referral fees for these services, together with advertising, support the business.

David Parsons, media director of the International Christian Embassy in Jerusalem, notes that until Travelujah came on the scene, the majority of Christian tourism sites catered to the Catholic and Orthodox market, with pictures of ornate churches and audio clips of Gregorian chants and hymns. “This wouldn’t sell to the Evangelical market, which has the greatest growth potential for tourism to Israel these days,” Parsons says.  “Elisa is doing a good job of presenting a site that welcomes Catholics,
Orthodox and Evangelicals.”

Travelujah encourages its users to create blogs where visitors can share their experiences. During the Feast of Tabernacles celebrations, for example, pilgrims posted photos and reports to friends and family back home. “This,” Moed says, “adds value to their visit and helps us spread the word and attract visitors for the next year’s celebration.”

“People are looking for something beyond the traditional pilgrimage,” she adds, “so it really helps them when other pilgrims describe their trips and offer advice.”

David Nekrutman, executive director of the Center for Jewish Christian Understanding and Cooperation, an Orthodox Jewish organization that promotes outreach to Christians, says the site’s most valuable contributions are its “insider’s view” of what to expect from certain sites, and its social media aspects which offer suggestions for “outside-the-box” activities – particularly those that include opportunities to meet Israelis.

“Christian tourism in its current form is lacking in opportunities for interaction,” Nekrutman notes. “People can come and visit the land and not relate to the people. The website sends the message that Israel is a vibrant society and … offers them the opportunity to learn how to meet the people and get more than the typical template tour.”

So what exactly is standing in the way of the millions of potential Christian pilgrims of various denominations? The biggest roadblock, Moed says, is expense, followed by security concerns and nervousness regarding the logistics of moving between Israel, the Palestinian territories, Egypt and Jordan. She addresses all of these issues on Travelujah, and works in cooperation with vendors in various countries to smooth the way for Christian tourists. This, she emphasizes, benefits Israel as much as it does Palestinians: If Christian pilgrims can’t get the full Holy Land experience, they likely aren’t going to come at all, she says.

“Faith tourism spurs cooperation between Israel and its neighbors,” Moed says. “We must work together to satisfy the needs of Christian travelers seeking to visit the Holy Land and see biblical sites in Israel, the Palestinian territories, Jordan and Egypt. Creating a successful tourism strategy requires cooperation.”

With all due respect to campaigns marketing Israel as a pleasure destination, Moed says she firmly believes that sun and fun are not the country’s greatest assets if it truly wants to dramatically develop its tourism industry. “Look, Christians are not visiting because of our beautiful beaches,” she says. “There are many nice beaches in many other countries that are a lot more affordable. Our unique selling point as a destination is our biblical history, that this is the land of our forefathers; the fact that this is where Jesus spent his lifetime. It’s something no other country in the world can claim. If you want to really understand the roots of Christianity and walk in the footsteps of Jesus, you have to come to Israel. That’s where we stand out.”

Travelujah can be visited at www.travelujah.com