Taking the Jewish vote for granted 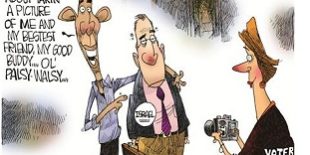 President Obama and the Democratic Party seem to feel that they can do no wrong as far as the Jewish vote is concerned. In recent weeks, the Democratic Party has supported the candidacy of a number of Congressional candidates who are not only “anti-Israel” but are avid defenders of Islamic religious leaders who even today, less than 150 days from the November Presidential elections, are espousing blatant anti-Semitic and anti-American beliefs.

Ex-Mayor Ed Koch, Rep. Jerrold Nadler (D-N.Y.), City Councilman David Greenfield and state Assemblyman Dov Hikind, among others, gathered in front of the Museum of Jewish Heritage-A Living Memorial to the Holocaust in downtown Battery Park at a news conference to call Barron, a Brooklyn Democrat, an “enemy of the State of Israel” and the New York Jewish community.

Barron, a city councilman, is facing state Assemblyman Hakeen Jeffries in a June 26 Democratic primary. The politicians at Battery Park expressed support for Jeffries and called Barron an “anti-Semite,” “hateful” and a “bigot.” Barron has compared the Israeli treatment of the Palestinians to the Nazi treatment of Jews during World War II. He also has publicly praised foreign dictators such as the late Muammar Gaddafi of Libya and Robert Mugabe of Zimbabwe.

“To compare Israel to Nazis, calling what Israel’s doing genocide? Israel’s trying to survive in a tough neighborhood,” Nadler said during the news conference, according to Politicker. The longtime congressman added that Israel is “not doing anything like Nazis. To even put them in the same universe is a disgrace to the English language.” Nadler said Barron’s election to Congress, “to some extent would legitimize this kind of anti-Semitic discourse.

Only last week, Rep. Bill Pascrell won the Democratic primary for the 9th Congressional District U.S. after defeating fellow incumbent U.S. Rep. Steve Rothman in the Democratic primary. President Obama met with Rothman in the Oval Office just before the district election and strolled with him in full view of reporters, although he stopped short of endorsing him publicly and never set foot in the district sending instead on his behalf former President Bill Clinton to personally appear so as not to antagonize the large Islamic population in the district.

Rothman, who is Jewish and a strong supporter of Israel lost the election to Bill Pascrell in large part due to the openly anti-Semitic activism by Pascrell’s Muslim supporters. Pascrell also did not challenge Arabic-language campaign posters produced by his supporters enjoining the “Arab Diaspora community” to elect Pascrell, “the friend of the Arabs.” The poster touted the race as “the most important election in the history of the community.” Rather than challenge these anti-Semitic attacks, Pascrell enthusiastically courted the Muslim vote in his district.

The Democratic Party’s inclination to support and run candidates who have expressed anti-Semitic beliefs and have expressed clear anti-Israel sentiments is not a new phenomena dating back to and not coincidentally to the period when Obama was getting his Presidential campaign established. In Connecticut’s 2006 Democratic Senate primary, anti-Semitic slurs and innuendos were prominent features of Ned Lamont’s successful race against Sen. Joseph Lieberman as recently noted by Carolyn Glick in the Jerusalem Post.  Defeated in his party’s primary, Lieberman was forced to run as an Independent. He owed his reelection to Republican support. Lieberman’s election victory over Lamont did not force all of his fellow Democrats to rethink their use of anti-Semitism as a campaign strategy. At a candidate’s debate in this year’s Connecticut Democratic Senate primary race, candidate Lee Whitnum attacked her opponent Rep. Chris Murphy as a “whore who sells his soul to AIPAC.”

This clear and emerging tendency to take the Jewish vote for granted by Obama and the Democratic Party is not only characterized by supporting anti-Semitic and anti-Israel candidates running under the Democratic Party banner but also is symbolized by Obama’s refusal to visit Israel while claiming to be Israel’s “best friend”. In a recent editorial by Jonathan Tobin in Commentary he pointed out that senior Jewish supporters of the Democratic Party have been imploring Obama to visit Israel ever since he was elected only to being consistently rebuffed by the President. Although President Obama expressed a willingness to go to Israel while running for president in 2008, his deep dislike for Netanyahu has led him to avoid Israel since then. Obama’s deliberate avoidance of Israel in June 2009 when he spoke to the Arab world from Cairo making an insulting comparison between the Holocaust and the plight of the Palestinians Arabs only reinforced the perception that he can articulate anti-Israel sentiment without having to pay a political price among Jewish Democrats.  Giving the green light to Islamic forces to take over the Middle East under the disguise of Democratic reform and the Arab Spring did little to disguise his natural inclination towards the Islamic world.

Despite the obvious political gain from a visit to Israel, it hasn’t happened. This hasn’t happened only because Obama is certain that no matter what he says and what he does, the Jewish vote is in his pocket. Yet Jewish Democrats, angered and fed up with President Obama’s lack of vision and overall incompetence in running America, in addition to his proven hostility towards Israel have begun to rebel. Across the board polls are beginning to suggest that American Jews are rethinking their democratic roots and responding to the strong contrast between Obama’s politics of appeasement and blaming others with the unwavering support of Israel as evidenced by GOP leaders like Republican Presidential candidate Mitt Romney. The Republican Party is currently experiencing the highest rate of Jewish support in close to a quarter of a century and that support is increasing as we approach the November elections. Obama still doesn’t get it, as he continues to slumber along alienating not only Democratic Jewish voters but all of America.