Boycott in a Christian Cassock 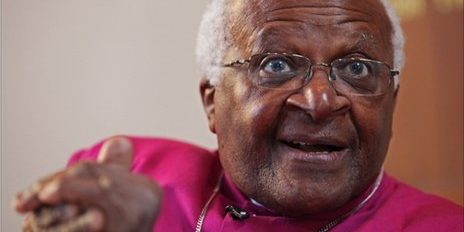 The Presbyterian Church (USA)’s biennial General Assembly at the end of June is expected to vote on a number of resolutions that would divest the Christian denomination from companies that conduct business with Israel, such as Caterpillar, Hewlett-Packard and Motorola.

A number of Churches have already pushed for divestiture of Caterpillar stock. The Quaker Friends Fiduciary Corporation, which holds over $200 million in assets and considers itself “the champion of social justice”, has just divested from Caterpillar, while according to the London Jewish Chronicle, the Scottish Church will no longer consider the Israeli perspective when campaigning on the Israeli-Palestinian conflict, as its General Assembly has voted on it.

To understand this new Christian wave of hatred for the Jewish people, one has to examine Archbishop Desmond Tutu’s ideology. Archbishop Tutu, whose role in the fight against South African apartheid in the 1980s gained him the Nobel Peace Prize and global fame, worked hard to influence the Western Churches’ vote to divest from Israel.

Tutu recently penned an article in The Tampa Bay Times, where he descended into rank anti-Semitism: “Whether Jews like it or not, they are a peculiar people. They can’t ever hope to be judged by the same standards which are used for other people”.

Who is the Archbishop who calls the Jews “peculiar people”?

Barack Obama awarded him the US highest honor, the Presidential Medal of Freedom. Tutu has been called “an inspiration” and was compared to Albert Schweitzer and Gandhi. The Wall Street Journal labeled him “the best known priest in the world”.

Tutu was even asked to donate his genome to scientists to discover the African roots of mankind. From his church in segregated Soweto, Tutu urged the imposition of economic sanctions against the white South African government.

Since then, Tutu’s face has become the symbol of a kind of goodness. However, the Archbishop’s iconic face has found another cause no less popular: the global campaign against the Jewish people and state.

It was Tutu who convinced the University of Johannesburg to end its relationship with Ben-Gurion University as part of a boycott against Israeli academic institutions, resembling the dark time when German universities banned famous Jewish intellectuals such as T.W. Adorno and Albert Einstein. The Archbishop sponsored a call for an arms embargo against Israel.

Tutu knows that charging Israel with apartheid is simply a blood libel, as Arabs and Jews live and work together in Israel, while sharing all public facilities (hospitals, schools, malls, buses, cinemas, parks). But the Archbishop is not interested in preaching the truth, but rather, in promoting the liquidation of Israel.

On universities worldwide, in the mainstream media and in large parts of Western public opinion, Tutu’s analogy of the “Zionist apartheid” has become the new codeword for Israel’s “racist evil”.

Thanks to Tutu, in the same city where President Mbeki held his festival of victory against apartheid, another death sentence for the Jews was being pronounced under the UN’s umbrella.

Tutu proclaimed, many years before Iran’s Ahmadinejad, that the West had muted criticism of Israel because of guilt over the Holocaust. Tutu has accused Israel of acting in an “un-Christian” way and last November he said that “the suffering inflicted by Israel on the Palestinian people shows that it has forgotten the Jewish scriptures”.

Tutu has complained of “the Jewish monopoly of the Holocaust” and has demanded that its victims must “forgive the Nazis for the Holocaust”, while refusing to forgive the “Jewish people” for “persecuting others”.

Tutu’s cassock masks a long, hateful history of ugly intolerance toward the Jewish people and Israel. Tutu resembles those Christian bishops who fomented the Final Solution by the idea that the “wandering Jew” is the symbol of God’s rejection of the Jewish people.

Tutu’s solution for Israel is very similar to Martin Luther’s advice to the burghers of Braunschweig in 1543 that Jewish properties should be destroyed, that rabbis be prevented from teaching and that Jewish resisters be expelled from the country to make them realise “they (Jews) are not masters in our land”:

“Moved by prayer and respectful piety, we must act with merciful severity … In the first place, their synagogues should be burned down and what does not burn must be covered in mud”.