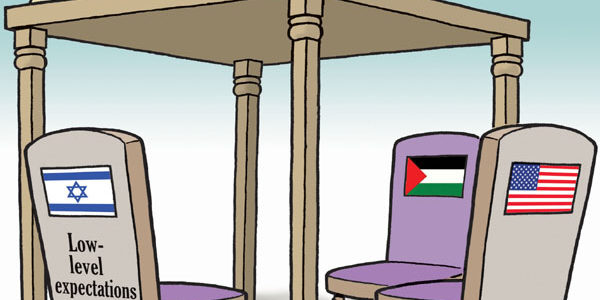 Israel’s leaders appear to have developed a previously unheard-of malady, one so acute it threatens to overwhelm both their mental faculties and common sense. It is what I refer to as “Peace-Traumatic Stress Disorder” (PETS), and its symptoms are fairly easy to discern.

Like any anxiety condition, it can be traced to a harrowing and life-threatening event: the signing of the disastrous Oslo accords with the Palestinians nearly two decades ago. The terror and bloodshed brought on by that dubious deal with Yasser Arafat, along with as its profound failure to bring peace, seem to have left deep psychological marks on its proponents, clouding their ability to think clearly about Israel’s current predicament.   But whereas most of those who suffer from stress disorders seek to avoid any reminders of the original ordeal, victims of PETS ironically follow a different path.   Indeed, they seem compelled to embrace the trauma, and even to relive it.

Take, for example, Defense Minister Ehud Barak, one of PETS’ most high-profile casualties.   In a speech to the Institute for National Security Studies in Tel Aviv on May 30, Barak’s affliction was on full display.

“We must aim to discuss all of the core issues, putting an end to the conflict, and an end to mutual claims,” he said, adding, “if this appears to be impossible, we need to think of an interim agreement, and even unilateral actions.”

NEEDLESS TO say, Barak’s remarks were completely detached from reality, and given the fact that he is tasked with the nation’s defense, this is all the more disturbing.

After all, Palestinian Authority Chairman Mahmoud Abbas has consistently refused to return to talks with Israel and has repeatedly rejected the Jewish state’s pleas in this regard. So it is difficult to comprehend with whom Barak expects to discuss “all of the core issues” if there is no one who is willing to sit across the negotiating table.

Moreover, the very idea that Barak would raise the prospect of “unilateral actions” is chilling in light of Israel’s calamitous experience with such measures previously.

Barak himself was the prime minister who ordered Israel’s unilateral retreat from Lebanon in 2000, which led to a Hezbollah arms buildup and paved the way for the outbreak of the Second Lebanon War in July 2006.

And what about the 2005 unilateral pull-out from Gaza and the expulsion of the Jews from Gush Katif, which brought Hamas to power and exposed southern Israel to unprecedented rocket fire? In both cases, Israel implemented a policy of unilateral withdrawal, and it blew up in our faces.

Since Barak is widely praised for his keen intelligence and sharp analytical skills, the only explanation for his invoking the possibility of Israel taking still more such measures must be that he is suffering from PETS. Rather than coming to terms with the past and learning from it, he is seeking to press the “rewind button” and repeat the mistakes of yesteryear.

Likewise, the current government seems determined to recreate the trauma of forcibly removing Jews from their homes by pushing forward with plans to evacuate families from the Ulpana neighborhood in Beit El before the end of the month.

In doing so, they are consciously ignoring the fact that previous expulsions, such as those from Amona in February 2006, painfully sharpened divisions within Israeli society and undermined efforts to strengthen our national cohesion and unity.   Every time the Israeli government has uprooted Jews, it has only played right into the hands of our foes, who view such measures as a sign of weakness and frailty.

This has encouraged them to be more obstinate and inflexible in their demands, further lessening the already trivial chances of reaching some sort of accommodation.   Nonetheless, that has not stopped the present governing coalition, which now runs the risk of provoking further intra-Jewish conflict by dispatching bulldozers to Beit El.

Clearly, this is another case of PETS at work.   What is needed now is for our leadership to get some serious help. It is time for them to acknowledge the disorder with which they are afflicted, accept it, overcome it and move on. For nearly 20 years, since Yitzhak Rabin and Yasser Arafat shook hands on the White House lawn, Israel has tried negotiations and concessions, unilateral moves and concrete gestures.

We have turned over territory, evacuated portions of our ancient homeland, and endured unparalleled terror and hate.   None of it has worked, and to continue banging our heads against the wall will only result in still more headaches.   All of this brings to mind a famous skit by comedian Eddie Murphy which went something like this: “those horror movies are really scary,” he said. “But you know what I was wondering about them? I was watching movies like Poltergeist and Amityville Horror. Why don’t the people just get the hell out?” Some of Israel’s leaders appear to be stuck in the diplomatic equivalent of a haunted house, one where the ghost of a false peace continues to spook their psyches.

It is time to break out from under peace-traumatic stress disorder, and dispel the ghosts. Instead of looking for ways to give up parts of the Land of Israel, let’s reinforce our hold on every part of it. That, after all, is what any healthy nation would do.