Quick thoughts on the unity government 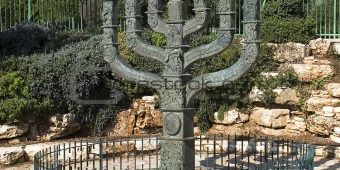 I don’t think that this move was either motivated by or will impact Netanyahu’s decisions regarding Iran’s nuclear weapons program. If the elections had been carried out in September, as we thought, Netanyahu would certainly have been reelected. Obama, concerned about his foreign policy bona fides and the Jewish vote on the eve of his reelection bid, would have been unable to undermine Netanyahu on Iran or just about anything else. So from Netanyahu’s perspective, a September election date immunized him from White House pressure.

True, Mofaz has been parroting former Mossad chief Meir Dagan’s attacks on Netanyahu, but no one really cares too much about the criticisms. This is particularly true because Dagan, et. al. actually share Netanyahu’s assessment of the Iranian threat. They just don’t want him to be the man dealing with it because they hate him personally.

They know, and Mofaz knows, and Obama knows that the Israeli public will rally around Netanyahu in the event he orders an attack. So widening the coalition would only impact his decision on Iran at the margins, if at all. I suppose from the perspective of optics, it is nice to go into such a mission with a massive coalition standing with you.

Some on the right have voiced concerns that Netanyahu wants this coalition so he can reinstate negotiations with the Palestinians and withdraw from Judea and Samaria. Maybe. But it’s hard for me to believe that Netanyahu will want to go full speed ahead with that. What would he stand to gain? Moreover, the Palestinians are the ones who ended the talks, not Netanyahu. And with Islamists rising to power throughout the Arab world and in Egypt particularly, Mahmoud Abbas has no incentive to return to negotiations.

Here it is important to note that to a large extent, Netanyahu has built his present power on his refusal to commit seriously to any binding position on the Palestinians. I don’t see him sacrificing this winning policy any time soon by following in Ariel Sharon’s footsteps and betraying his political camp and ideology completely.

I think the unity deal is an example of a situation in which Netanyahu was presented with an offer he’d be an idiot to refuse. In return for essentially nothing, he built himself the strongest and largest coalition Israel has ever seen. He gave Mofaz nothing but breathing space for a year. Mofaz didn’t even get a governing portfolio. And in exchange Netanyahu received unprecedented power and political stability for more than a year.

Finally, there is an economic aspect to this decision. By bringing Kadima into his coalition, Netanyahu effectively ensured that his free market economic policies will be maintained and the socialist voices in Israeli politics will be marginalized for the next year or so. With France going socialist, Israel’s Left, led by Labor Party leader and Marxist Shelly Yahimovich would have had more resonance in the public for its statist, deficit spending economic platform. Now Netanyahu got another year during which the public will see what those policies are doing to Europe and so make his economic arguments for him.

All in all this is a great day for Netanyahu. I hope that I am right that he won’t use his new strength to destroy his political party as Sharon did before him. I don’t see any previous action on his part that lends to that conclusion. But certainly the public, and particularly the Likud members who are in politics to represent and advance their values and not just to gain power for power’s sake need to think carefully about their strengths and weaknesses. They need to base their actions over the next year on a strategy that maximizes the former and minimizes the latter understanding all the time that they are dealing with an incredibly powerful party leader.