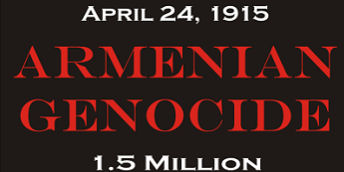 While the modern-day Republic of Turkey was founded in 1923, eight years after its Ottoman predecessors embarked on a massive and systematic undertaking to rid the empire of its Armenian population, the country today often finds itself in diplomatic spats with various Western nations over its history. Outside the periphery of geopolitics, it would be perplexing to most as to why an event that occurred nearly 100 years ago would impact relations between Turkey and the United States and various European countries. The answer lies in the annals of history.During the First World War, while the Islamic Ottoman Empire was fighting the Allied Powers on the side of Germany, its native Christian Armenian population became a target of organized deportations and massacres. Long having suffered from discrimination and second-class citizenship, WWI provided the Young Turk government a cover to reach a “final solution” to the prevailing Armenian question.

Starting April 24, 1915, with the arrest and killing of the Armenian intelligentsia, an entire civilization was uprooted from its many-millennia-old homeland and outright massacred or driven to a slow death in the deserts of Syria. The material and cultural loss of the Armenians has also been enormous, with some 3,000 churches destroyed alone. It is estimated that out of a population of two million Armenians, one-and-a-half million were killed while another half a million survived and dispersed to nearly every continent, thus resulting in the creation of a large and dynamic Armenian diaspora.

This is where global power-politics unfolds. As offspring of survivors of the genocide, Armenians throughout the world developed an ingrown sense of patriotism and strong national identity over the years. With the Cold War over and with a tiny, but nevertheless independent, Republic of Armenia in existence, the past two decades have seen a renewal of the international drive for recognition of the genocide in light of persistent Turkish denial.

The Armenian refugees of 1915 who eventually found themselves integrated and well-established into their host societies, and frustrated with a lack of justice for the genocide, often succeeded in bringing their families’ plight to the attention of world leaders and onto the agendas of global parliaments and the US Congress. It is this very Armenian diaspora that is so feared and vilified by the Turkish government, which regrettably fails to comprehend and accept the realities, needs and anguish of these communities spread all across the world. An eerie reminder of the policy of exile still in effect, visiting diaspora scholars who have written on the genocide have also been deported from the country.

To date, over 20 countries and 43 US states have officially recognized the Armenian genocide, often with high costs and difficult political battles. In 2001, when the French parliament officially passed a resolution formally recognizing the Armenian genocide, Turkey recalled its ambassador and threatened to cut off economic and military ties with France. The two countries narrowly escaped yet another political fallout earlier this year over a proposed bill that would have criminalized the denial of the Armenian genocide in France. The French Constitutional Court, however, found the bill unconstitutional and the measure eventually fell through.

Arguably the most influential Armenian diaspora is that of the United States, where powerful Armenian lobby groups often influence members of Congress to pass pro-Armenian legislation and secure large amounts of foreign aid to Armenia every year. While successful on a number of issues, the Armenian Genocide Resolution is yet to be passed by both the House and the Senate – a measure that consistently fails due to Turkey’s heavy pressure on the White House and threats to close down a US military base on its territory.

President Barack Obama, while a firm supporter of Armenian genocide legislation as senator and later as presidential candidate, has also not come through on his campaign promise to recognize the 1915 events as genocide despite a strongly-worded statement in acknowledgement of “Armenian Remembrance Day.”

With the one-hundredth anniversary of the Armenian genocide fast approaching, Turkey increasingly finds itself isolated on this issue and under international pressure to finally recognize the wrongs of its predecessors. Its official policy of denial has been a total failure over the decades. Turkey has long relied on its military strength and geopolitical location to get its way on this and other issues including Cyprus and the Kurdish question; if its leadership wants to seriously advance the country’s democratization and “Europeanization” processes, as well as to set the stage for its rise as a regional power, it ought to think along the lines of peace and reconciliation with its neighbors, starting with an honest acknowledgment of its own history.