Quartet to meet in DC, but peace process expectations low 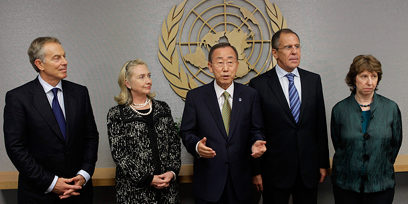 Senior Quartet representatives will meet in Washington on Wednesday amid little expectation that they will have more luck this time kick-starting direct negotiations between Israel and the Palestinians.

Blair and US Middle East envoy David Hale were in the region last week holding meetings with the sides and preparing for the Quartet parley.

The meeting comes as a framework for entering into negotiations that the Quartet unfurled in September at the UN failed to bear fruit. That framework did lead to low-level talks under Jordanian auspices in January, but that round ended on January 25 with the Palestinians saying they would only continue if Israel stopped all settlement construction, accepted the June 5, 1967, lines as the baseline for future talks and released a number of Fatah prisoners incarcerated before the Oslo accords. Israel refused those preconditions.

The September Quartet framework called for an initial meeting between the two sides within 30 days, leading to the trading of comprehensive proposals on security and territory within three months, and an overall agreement by the end of 2012.

The Quartet, whose overall effectiveness has been increasingly questioned because of Russian-US rivalries that often play out and render reaching consensus decisions difficult, last met at this level in March amid the fighting in the South. At that meeting, where Ashton and Blair joined via video conference, the Quartet issued a bland statement expressing “concern” about the violence in the South and calling on the Israelis and Palestinians to “remain engaged” and “refrain from provocative actions.”

US ambassador Dan Shapiro told The Jerusalem Post last week that the Quartet wanted to see the discussions that began in Jordan “continue and get increasingly into the core issues.”

Shapiro said efforts continue to “get the parties to feel that they can have the kind of discussion that ultimately could produce progress on some of these core issues – territory and security being the first pair, and then moving to other issues.”

While the prospects for immediate breakthroughs “are probably not very bright, that doesn’t mean you can’t make some progress, and set the groundwork for larger progress at some period of time,” Shapiro said.

There will likely be “continuity” between the Quartet’s statement in September and what will emerge from Wednesday’s meeting in Washington, the US envoy said.

On the eve of the Quartet meeting, the PA announced that it was seeking a UN Security Council resolution condemning continued construction in West Bank settlements and east Jerusalem.

On Monday, the PA envoy to the UN, Riyad Mansour, submitted a letter to the Security Council members and Ban, calling on them to condemn settlement activity Riyad al-Maliki told Agence France Press.

He said that the letter called for “urgent measures to put pressure on the occupying power, which is Israel, to compel it to stop these actions and policies immediately.”

The letter, according to Maliki, warns that Israel’s “illegal and destructive plans not only inflame tensions but further underscore the dubious nature of the occupying power’s claims of readiness to negotiate a peace settlement.”

The letter accuses Israel of working toward destroying the two-state solution with its continuing illegal settlement campaign.