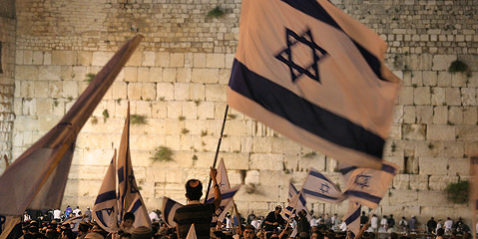 At least 70,000 people from Israel and abroad gathered at the Western Wall in Jerusalem’s Old City on Monday for the traditional priestly blessing.

The blessing is held at the Kotel – the Hebrew name for the Western Wall – during the intermediate days of Passover and Sukkot, and also on Shavuot, and typically attracts thousands of worshipers. The assemblage at the Temple Mount for these holidays is rooted in the Jewish tradition which saw Israelites ascend to the Temple for ritual worship led by the high priests during these three holidays, called the Shalosh Regalim, or the three pilgrimage festivals.

While pilgrimage is no longer required in Judaism since the destruction of the Second Temple, many Jews grasp the opportunity to go up to Jerusalem during these holidays.

One man, a husband and father of two, told Army Radio on Monday that he brought his family from the United States just for the Passover gathering at the Western Wall.

“People have come from all over,” he said.

The rabbis conducting the ceremony made traditional dedications during their blessings, this year directing their prayers towards Israel’s soldiers, the hospitalized Israeli agent Jonathan Pollard – who is serving a life sentence in the US – and Rabbi Yosef Shalom Elyashiv, a highly influential Ashkenazi rabbi who at 101 has been in and out of the Shaare Zedek Medical Center a number of times this past year.

After the blessings, Israeli chief rabbis Yona Metzger and Shlomo Amar addressed the crowds, along with Chief Rabbi of the Western Wall Shmuel Rabinovitch.