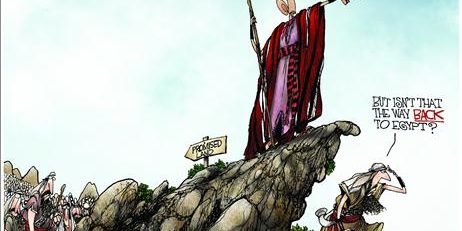 Hamas terror boss Fathi Hamad is a notable figure. Hamad is both the director of Hamas’s al-Aksa television station and the terror group’s “minister” of the interior and national security. His double portfolio is a clear expression of the much ignored fact that for terrorists, propaganda is inseparable from violence.

On March 23, Hamad was interviewed by Egypt’s Al Hekma television station. The interview was translated by MEMRI.

Hamad made two central points. First, he claimed that the Palestinian war against Israel is the keystone of the global jihad. Second, he said the Palestinians are not a distinct people, but transplanted Egyptians and Saudis.

“Thus, the conspiracy is very clear. Al-Aksa and the land of Palestine represent the spearhead for Islam and for the Muslims. Therefore, when we seek the help of our Arab brothers, we are not seeking their help in order to eat, to live, to drink, to dress, or to live a life of luxury. No. When we seek their help, it is in order to continue to wage Jihad.”

What Hamad’s interview tells us is that today Hamas – the Palestinian branch of the Muslim Brotherhood – is more interested in unity with Muslim Brotherhood-dominated Egypt than with Fatah. Whereas in the past it joined Fatah in obscuring the direct link between the jihad against the Jews and the jihad against the non-Muslim world, today it seeks to emphasize the connection. To this end, Hamas is willing to abandon the myth of Palestinian nativism and acknowledge that the Palestinians are an artificial people, invented for the purpose of advancing the global jihad in the key battlefield of Israel.

Hamad’s statements underscore a widespread sentiment among Israelis about the revolutions now tearing apart the Arab world. That sentiment is that while the results of these revolutions will be catastrophic in the medium and long term, in the short term they bring respite to Israel. With Arab regimes – new and old – struggling to consolidate power, they have little time or energy to devote to their war against Israel.

In this situation, the thinking goes, Israel should be able to devote its attention to attacking Iran’s nuclear facilities.

Unfortunately for Israel, while the Arab world is increasingly uninterested in the Palestinian war against Israel, Europe and the American Left are more than happy to pick up the slack.

Consider two recent events. First, two weeks ago the UN Human Rights Council voted to launch a commission whose goal is to criminalize Israel for the existence of Israeli communities beyond the 1949 armistice lines.

The council’s decision to form a new kangaroo court to criminalize Israel was not the result of the Arab diplomatic war against Israel. It is the consequence of the European diplomatic war against Israel. It is Europe, not the Arabs that has barred Israel from caucusing with its UN regional group – the Western European and Others Group. By barring Israel from the caucus, the Europeans have denied Israel the ability to make its case to other UN member nations.

For its part, the Obama administration pays lip service to the need to end the Human Rights Council’s obsessive war against Israel. But at the same time, it has effectively joined that war by legitimizing the anti-Israel council both by joining it, and by refusing to use its membership as leverage to coerce the council into abandoning its campaign against Israel.

Following the council’s vote to form a new Goldstone-style commission to attack Israel, the State Department issued a statement in which it claimed that due in part to US membership in the council, the council had been spurred to “action on a series of important human rights situations around the world.”

Then there was last Friday’s Global March to Jerusalem, in which a consortium of protesters organized by Hamas, the Muslim Brotherhood, Iran and the international Left intended to storm Israel’s borders and fill the state with hostile foreigners.

As Ribhi Halloum, the coordinator of the march said last year, the goal of the GMJ was “to move the right of return possessed by Palestinian refugees from theory to practice.”

In a press conference in Amman days ahead of the operation, Halloum said that organizers expected for two million people to mass at Israel’s borders and attempt to breach them.

In the end, the GMJ failed to mount its planned invasion. The sum total of the day’s events amounted to several violent local demonstrations by Palestinians in Judea and Samaria joined by foreign and Israeli leftists. Israel’s borders were not breached.

The GMJ’s failure to achieve its aims owed to the same pan-Arab distraction that Hamad tried to address in his interview with Egyptian television.

But while the Syrians, Egyptians, Jordanians and Lebanese have more urgent business to attend to, the international Left has intensified its own campaign against Israel.

Leading anti-Israel, (and anti-Jewish) leftists including George Galloway, Desmond Tutu, Mairead Maguire, Noam Chomsky, Jeremiah Wright, Cindy Sheehan and Medea Benjamin served as members of the GMJ’s various organizing committees. These self-proclaimed human rights activists had no problem with the fact that the Iranian regime took a central role in organizing the operation or that the clear goal of the campaign’s Muslim organizers is the destruction of Israel.

To the contrary, this goal is now openly shared by growing numbers of Western leftists. In an op-ed on the Guardian’s online opinion forum, Sarah Colborne, a member of the GMJ’s organizing committees and its national coordinator for the UK as well as the director of the Palestine Solidarity Campaign in the UK wrote, “The struggle for Palestinian rights is at the core of the global movement for social and economic justice.”

Judith Butler, one of Colborne’s American counterparts, has opined that “understanding Hamas, Hezbollah as social movements that are progressive, that are on the Left, that are part of a global Left, is extremely important.”

Disturbingly, the international Left is receiving indirect support for its goal of destroying Israel’s sovereignty over Jerusalem, (and through it, destroying Israel), from the US government. Just days before the GMJ failed to unravel Israel’s physical control over Jerusalem, in a jaw-dropping exchange between State Department spokeswoman Victoria Nuland and AP reporter Matthew Lee, Nuland refused to say that Jerusalem is the capital of Israel.

The US has always been deeply hostile to Israel’s sovereignty over Jerusalem. Beginning in 1950 the State Department directed US diplomats to discourage other governments from establishing their embassies in Jerusalem. But while the US has always undermined its own alliance with Israel by aligning its policy on Jerusalem with Israel’s worst enemies, under President Barack Obama, the US’s willingness to express this hostility has been unprecedented.

This hostility has been demonstrated most famously by Obama’s demand that the government stop respecting Jewish property rights in the city.

It has also been given graphic expression by the administration’s decision to move the Consular Section of the US Consulate in Jerusalem from an Arab neighborhood in eastern Jerusalem to the site that Israel allocated for a new US embassy.

The site is located in the Jewish Arnona neighborhood in western Jerusalem.

Israel allocated the land to a future US Embassy after Congress passed the US Embassy Act in 1995 which obligated the US government to move the US embassy from Tel Aviv to Jerusalem. The site was chosen, among other reasons, because its location in western Jerusalem put it outside the dispute regarding whether or not Israel will retain sovereignty over eastern, southern and northern Jerusalem in a hypothetical peace treaty with the Palestinians. The US government uses the non-resolution of the Palestinian conflict with Israel as its justification for refusing to accept Jewish property rights in those areas of the city.

The US Consulate in Jerusalem is not subordinate to the US Embassy in Tel Aviv. It presents itself as the unofficial US embassy to the non-existent state of Palestine. By utilizing the site in western Jerusalem allocated for a future embassy as an extension office of the consulate, the Obama administration made clear its rejection of Israel’s right to sovereignty over all of Jerusalem. And in light of the US law that recognizes Jerusalem as Israel’s capital and orders the government to relocate the embassy to Jerusalem, the Obama administration not only indirectly legitimized the cause of those who seek the destruction of Israel.

It did so in contempt of US law.

In truth, there is nothing new about the West’s rejection of Israel’s right to sovereignty or even to its support and sponsorship for the Arab war for the destruction of Israel. Such animosity predates not only the 1967 Six Day War. It predates the establishment of Israel.

British Col. Richard Meinertzhagen, who served as an intelligence officer in wartime and post-World War I Mandatory Palestine, made this point clearly in his memoir Middle East Diary.

They told him, “He had a great opportunity at Easter to show the world that the Arabs of Palestine would not tolerate Jewish domination in Palestine… and if disturbances of sufficient violence occurred in Jerusalem at Easter, would advocate the abandonment of the Jewish home.”

Today, the Jewish people begin their week-long celebration of Passover, the Jewish festival of freedom. This evening we will read in the Haggada that our fight for freedom is an eternal struggle.

When we assess the global nature of the current assault on Jewish freedom and sovereignty in our country, we see the truth of that message.

While our present circumstances give us much to celebrate, the work of Jewish liberation is far from over.

Category: Feasts and festivalsBy The Jerusalem ConnectionApril 6, 2012Leave a comment