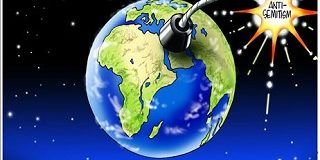 Before he was killed by French police, the jihadist murderer of three French-Algerian soldiers and four Jews, including three children, said that he was driven to killing by the “murder” of Palestinian children by Israelis. Of course, when all else fails blame the Jews. But this excuse is a mere pretext, a propaganda tactic for finding Western moral support by exploiting the unsavory anti-Jewish prejudices still lurking in too many Westerners.

The narrative that the Israeli “brutal occupation”  of the “Palestinian homeland” is the cause of jihadist violence is a hoary cliché, a jihadist pretext for terror enabled by Western anti-Semitism and pop psychology. Examples of this received wisdom are easy to collect. French foreign minister Hubert Védrine in 2002 explained increasing anti-Semitic attacks and car-burnings in France by saying, “One shouldn’t necessarily be surprised that young French people from immigrant families feel compassion for the Palestinians and get agitated when they see what is happening. The historian Tony Judt in his history of post-war Europe concurred, agreeing that the attacks were “a direct outcome of the festering crisis in the Middle East.” Repeating this received wisdom, General David Petraeus, in his 2010 Congressional testimony, said that the Arab-Israeli “conflict foments anti-Americanism sentiment, due to a perception of U.S favoritism for Israel. Anger over the Palestinian question limits the strength and depth of U.S. partnerships with governments and peoples” in Iraq and Afghanistan.

“Meanwhile, al-Qaeda and other militant groups exploit that anger to mobilize support.” No doubt cognizant of the Western penchant for blaming Jews, Osama bin-Laden added Palestine to his ever-growing list of pretexts for attacking America: “The creation and continuation of Israel,” he lectured us in 2002, “is one of the greatest crimes, and you are the leaders of its criminals.”

Of course, bin Laden was never short of pretexts for rationalizing murder. First it was the American troops stationed in Saudi Arabia during the Gulf War. Then in 2004, he said American involvement in Lebanon in 1983 made him hate America. Elsewhere, he claimed that the U.S. had waged “a war against Muslims” since 1945. Yet in his statements after 9/11, bin Laden mentioned the real reason: the “humiliation and disgrace” inflicted on Muslims by the dissolution of the caliphate in 1924. That, not the creation of Israel, is the real “catastrophe” for Islamists, the culmination of three centuries of Western encroachment into the House of Islam. For theorists of jihad like Muslim Brothers Hassan al Banna and Sayyid Qutb, the existence of Israel was merely a symptom of a larger corruption of Islam by Western ideas that opened the door to the Western dominance that made Israel possible in the first place.

Moreover, it is hard to credit Arab or Muslim concern for Palestinian suffering, given the contempt most Arabs have shown for the people who ran away in 1948 rather than fight, or the way Arab countries herded Palestinian refugees into squalid camps existing on international welfare, or the body-count of Palestinians killed by their fellow Arabs, a number that dwarfs those killed by Israel while defending herself from terrorist attacks. Just the toll of Palestinians killed in the 1970 Black September massacre in Jordan, for example, around 5000, is over half the 8000 killed by Israel during the whole six-decade conflict. Clearly, the issue isn’t the number of dead, tortured, imprisoned or oppressed, but rather the identity of the enemy––infidels whose fate is to be subjected to Muslims, whom Allah called the “best of nations” destined to dominate the world.

The jihadist pretext of angry compassion for their oppressed Palestinian brothers, then, is a function of propaganda, a way to exploit the latent anti-Semitism still lurking in the Western soul in order to find support for the jihadist cause. No other explanation for hatred of Israel can account for the obsession with that country on the part of many Europeans, the irrational hatred that accompanies the ritualistic mantras of “never again” even as European countries pursue anti-Israel policies that aids those who in fact passionately want another genocide. Remember when France’s ambassador to England called Israel “that shitty little country” even as Palestinian terrorists were slaughtering Israeli women and children during the Intifada? That insult was just a new version of the old anti-Semitic tropes redolent of Der Sturmer that can be found everywhere in Europe. During the debate over the Iraq war, a British Labour M.P. said Tony Blair was “unduly influenced by a cabal of Jewish advisors.” A German former defense minister said President Bush wanted to remove Saddam Hussein because of “a powerful––perhaps overly powerful––Jewish lobby.”

A member of the European Parliament claimed that in the U.S. Defense Department “key positions are held by Jews; the Pentagon is today a Jewish institution.” And according to a recent Anti-Defamation League survey, such anti-Semitic attitudes are on the rise across Europe. Given these prejudices, blaming Israel as the global arch-villain comes easy to many Europeans, and puts in the hands of jihadists a powerful tool for rationalizing their terrorism and making it easier for Europeans to marginalize Israel.

Beyond European anti-Semitism, though, the “Israel made them do it” excuse bespeaks a remarkable arrogance on the part of Westerners, who can explain jihadist behavior only by the materialist and psychological categories with which Westerners are comfortable. Thus the jihadists have no motives of their own derived from their faith, but are merely reacting to Western sins like colonialism and imperialism, or to a lack of material prosperity and political freedom. No matter how often the jihadists quote chapter and verse of the Koran, hadiths, and Muslim theologians and jurisprudents, smug Westerners dismiss it all as the “distortions” of a fanatic fringe, and brand as “Islamophobes” those who call attention to these facts.

When such rationalizations are impossible, then our pundits and academics simply ignore this ever-increasing evidence of mainstream Islamic intolerance. Thus we heard nothing in the mainstream press when Abdulaziz ibn Abdullah Al al-Sheikh, the grand mufti of the Kingdom of Saudi Arabia, recently said it is “necessary to destroy all the churches in the Arabian Peninsula,” as the Freedom Center’s Shillman Fellow Raymond Ibrahim reported. Rather than take religion seriously and acknowledge the intolerant and violent theology of Islam that drives the jihad, Western intellectuals find it easier to blame Israel, which also allows them to indulge their irrational dislike of “Zionism,” the new face of the old anti-Semitism.

Western demonization and scapegoating of Israel have warped our foreign policy and our tactics for confronting jihadist terror and its state sponsors like Iran and Syria. We forget that Israel has been on the front-line of this war long before 9/11, and is our most important ally in this struggle. The more we compromise Israel’s security, the more we hearten our enemies and make them believe they can win.