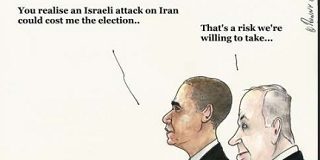 Obama’s charm offensive with Jewish voters was again in evidence today during his speech to the AIPAC conference. The president’s bragging of his “deeds” left little doubt that his desire to be seen as Israel’s best friend ever in the White House is due to fears of a decline in support from Jewish voters this year. Obama’s doubling down on his tough rhetoric on Iran — he specifically disavowed any thought of “containing” Tehran — and the complete absence in the speech of any of any interest in pressuring Israel to make concessions to the Palestinians– (a hallmark of his administration’s policies during his first three years in office) was a signal defeat for Jewish leftists like the J Street lobby that once hoped to wean the Democrats from AIPAC.

But even more significant was the fact that despite his repeated vows to prevent Iran from obtaining a nuclear weapon, there was little indication that Obama is prepared to make the leap from talking about the danger to actually doing something. His call for continued efforts towards negotiations on the issue undermined all the hard line rhetoric intended to appease wavering Jewish Democrats. Though his campaign will spin this speech as more proof that Obama has “Israel’s back,” Iran’s leaders may read it very differently and assume they are free to go on building their weapon with little fear the U.S. really is contemplating the use of force.

The first conclusion to be drawn from the speech is that Obama’s all-out effort to create more distance between the U.S. and Israel and to hound the Israelis to make concessions on borders, Jerusalem and settlements is dead for the moment. A re-elected Obama may take up this dead-end argument with Israel again this year, but for now, all that is forgotten. This is a crushing blow to J Street, who wrongly interpreted the 2008 election as signaling the end of the pro-Israel consensus in this country. Obama’s focus on Iran shows not only is he aware of the potential for a significant loss in his percentage of the Jewish vote this year, but that he must ignore those left-wingers calling for a less tough stand on Iran if he is to maintain the Democrats’ Jewish advantage.

But this renewed charm offensive should not be mistaken for a coherent strategy on Iran. The ayatollahs have been listening to Obama’s tough talk about them for years. But unlike those who may take the president’s claims about all his administration has done on the issue at face value, they have not forgotten years of Obama’s effort to “engage” them as well as a feckless diplomatic campaign that has not scared them much. The president’s Jewish admirers may believe his assertion that Russia and China have joined his coalition to isolate Iran, but the ayatollahs know that both countries are opposed to any further sanctions and that China stands ready to buy the oil the U.S. and Europe might boycott later this year.

Moreover, their ears must have lit up when in the course of a speech aimed at proving how little daylight exists between the administration and Israel, they heard the president continuing to argue in favor of further diplomacy. The Iranians regard any further negotiations as merely another opportunity to run out the diplomatic clock as they get closer to realizing their nuclear ambitions. The assumption that reliance on sanctions or more talking can get the Iranians to back down is without substance.   They also noticed what Obama’s Democratic cheerleaders will diligently try to ignore: the absence in the speech of any indication that the United States is willing to lay down “red lines” that mark the limit of how far Iran may go without obligating Washington to take action. Though the president deprecated the “loose talk” about war that has been heard lately, the only way to avoid such a conflict is to demonstrate to Iran that if it continues, as it has, to increase its efforts toward nuclear capability, it will bring down upon itself the wrath of the West.

Obama rightly restated the proposition that an Iranian nuclear weapon posed a threat to the United States and the West as much as it does to Israel. The logic of Obama’s rhetoric about the folly of containment — a point many in his administration don’t seem to accept — ought to point him toward abandoning his faith in a diplomatic effort that was doomed even before he began repeating the mistakes of the Bush administration on Iran.

Despite all the happy talk about Obama emanating from Israeli sources at AIPAC, Prime Minister Netanyahu understands that a policy of waiting for the U.S. to take action on Iran is tantamount to a decision to sit back and wait for Tehran to announce it has a bomb. Though there is no telling yet what Netanyahu’s decision on striking Iran may turn out to be, Israel’s friends can take little comfort from the president’s speech.