Obama makes the case for an Israeli strike on Iran 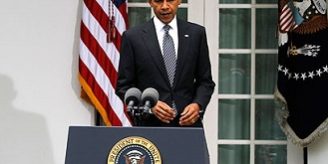 In his commentary in Maariv’s Friday news supplement, the paper’s senior diplomatic commentator Ben Caspit laid out a hypothetical lecture that Obama might give Netanyahu when the two leaders meet alone in the Oval Office this afternoon. In Caspit’s scenario, Obama used the one-on-one to set out the law to the Israeli premier. If you bomb Iran’s nuclear installations before the November elections, in my second term Israel will no longer be able to buy spare parts for its weapons systems from the US. So too, Caspit’s Obama said, the US will end its support for Israel at the UN Security Council if Israel dares to take it upon itself to prevent Iran from crossing the nuclear threshold before the US elections.

Perhaps Caspit wrote his article after hearing about a meeting between American Jews and Vice President Joe Biden’s National Security Advisor Anthony Blinken. According to Commentary’s Omri Ceren, Blinken told the assembled Jews that if Israel’s supporters discuss Obama’s hostile treatment of Israel in the context of the election, they can expect to suffer consequences if Obama is reelected.

It is important to keep Blinken’s threats and Caspit’s scenario in mind when considering Obama’s speech to AIPAC on Sunday morning.

Obama’s speech was notable for a number of reasons. First, this was the first speech on an Israel-related theme that Obama has given since the 2008 campaign in which he did not pick a fight with Israel. And it is due to the absence of open hostility in his address that Obama’s supporters are touting it as a pro-Israel speech.

While he didn’t pick a fight with Israel on Sunday, his speech did mark a clear attempt to undermine Israel’s strategic position in a fundamental – indeed existential – way. As many commentators have noted in recent weeks, Israel and the US have different red lines for the Iranian nuclear program. These divergent red lines owe to the fact that the US has more options for attacking Iran’s nuclear installations than Israel.

From Israel’s perspective, Iran’s nuclear program will reportedly become unstoppable as soon as the Iranians move a sufficient quantity of enriched uranium and/or centrifuges to the Fordow nuclear installation by Qom. Since Israel reportedly lacks the ability to destroy the facility, Israel’s timeline for attacking Iran will likely end within weeks. The US reportedly has the capacity to successfully bomb Fordow and so its timeline for attacking Iran is longer than Israel’s.

The reason this is important is because it tells us the true nature of Obama’s demand that Israel give more time for sanctions and diplomacy to work. When one recognizes Israel’s short timeline for attacking, one realizes that when Obama demands that Israel give several more months for sanctions to work, what he is actually demanding is for Israel to place its survival in his hands. Again, once Iran’s nuclear project is immune from an Israeli strike Obama will effectively hold the key to Israel’s survival. Israel will be completely at his mercy.   To understand just how dangerous this would be it is worth considering the other issues Obama covered in his speech. Obama’s speech essentially boiled down to three assertions, which he argued prove that he is the best friend Israel has ever had and therefore can be trusted to ensure its survival.

First, Obama asserted that military cooperation between Israel and the US has grown to unprecedented levels under his leadership. Second he claimed that his administration has served as Israel’s stalwart defender in the UN and generally when it comes to the Palestinian issue. Finally, he argued that he can be trusted to defend Israel from a nuclear armed Iran because of the sanctions that have been imposed on Iran by the US and the international community since he entered office.   The alleged expansion of US-Israel military cooperation under Obama’s watch has served as a regular talking point for Obama administration officials. The claim is convenient because it is based on classified information unavailable to the general public. You and I have no way of knowing if it is true.

But what we do know is that under Obama’s leadership, senior US military and defense officials have made repeated statements that are openly hostile to Israel. Then defense secretary Robert Gates called Israel “an ungrateful ally.” Current Defense Secretary Leon Panetta demanded that Israel “get back to the damned table” with the Palestinians. General Dempsey and his predecessor Michael Mullen have spoken disparagingly of Israel and its military capabilities and so, at a minimum gave comfort to its enemies.

Aside from these rather uncooperative comments, under Obama the US has adopted policies and taken actions that have endangered Israel militarily on all fronts and in fundamental ways. With Obama at the helm the US not only stood back and allowed Hezbollah and Iran to take over Lebanon. The US has continued to supply the Hezbollah-controlled Lebanese military with sophisticated US arms.

Under Obama, the US intervened in Egypt’s internal politics to empower the Muslim Brotherhood and overthrow Hosni Mubarak. The transformation of Israel’s border with Egypt from a peaceful border to a hostile one is the direct consequence of the US-supported overthrow of Mubarak and the US-supported rise of the Muslim Brotherhood and the Salafists. These are indisputable facts. Their military repercussions are enormous and entirely negative.   Then there is Syria. For more than six months, Obama effectively sided with Bashar Assad against his own people who rose up against him. Secretary of State Hillary Clinton called Assad a reformer. Now, as Assad butchers his people by the thousands, the US has still failed to send even humanitarian aid to the Syrian people. Almost unbelievably, Clinton said that Assad would have to agree to any US assistance to the people who seek his overthrow.   There have been reports that the US has warned Jordan, Lebanon, Iraq and Saudi Arabia about the possibility that Assad’s ballistic missiles and chemical and biological arsenals may be transferred to terrorists. Such a prospect constitutes a clear and present danger to US national security – as well as Israel’s national security. Indeed, the threat of proliferation of WMD is so dangerous that the administration could be expected to take preemptive steps to destroy or commandeer those arsenals. Certainly it could be expected to support an Israeli operation to do so. But according to reports, Obama has sufficed with empty warnings to the Arabs – not Israel – that this could perhaps be a problem.

By failing to act against Assad, the Obama administration is effectively acting as the guardian of Iran’s most important regional ally. That is, far from enhancing Israel’s military posture, Obama’s behavior towards Syria is enhancing Iran’s military posture. He is acting in a manner one would expect Iran’s ally to behave, not in the manner that one would expect Israel’s ally to behave.   As to Iran, while Obama touts the new anti-Iran sanctions that have been imposed since he took office as proof that he can be trusted to take action against Iran, the fact is that Obama has been forced to implement sanctions against his will by the US Congress and Europe. So too, Obama still refuses to implement the sanctions against Iran’s Central Bank that Congress passed against his strong objections earlier in the year. As with the case of Syria – and Hezbollah in Lebanon – on the issue of sanctions, Obama’s behavior has served to help rather than hinder Iran’s pursuit of nuclear capabilities.

Beyond Israel’s immediate borders, and beyond Iran, Obama’s behavior towards Turkey has had a destructive impact on Israel’s military position and strategic posture. Obama has said that Turkey’s Islamist, anti-Semitic Prime Minister Recip Erdogan is one of the five foreign leaders he is closest to. He reportedly speaks to Erdogan at least once a week. The Turkish leader is the Middle Eastern leader that Obama trusts the most.

Erdogan gained Obama’s trust at the same time that he ended his country’s strategic alliance with Israel and began directly funding the Hamas terrorist organization and providing aid and comfort to Hamas by seeking to end Israel’s lawful maritime blockade of Gaza’s coastline. What is notable about Obama’s relationship with NATO member Turkey is that he has not used his relationship with Erdogan to influence Erdogan’s behavior. Instead he has rewarded Erdogan’s behavior.

Obama’s self-congratulatory statements about US assistance to the development of Israel’s missile defense systems ring depressingly hollow for two main reasons. First, the military cooperation agreement between Israel and the US for the development of the Iron Dome anti-mortar and rocket shield was concluded and financed under President George W. Bush due to the peripatetic actions of Senator Mark Kirk. Obama inherited the program. And in his 2012 budget, Obama reduced US funding of the project.   The second reason his statements ring hollow is because his actions as President have increased Israel’s need to defend itself from Palestinian mortars and rockets from Gaza. Obama has empowered the Palestinians to attack Israel at will and pressured Israel to take no offensive steps to reduce the Palestinians’ ability to attack it.   This brings us to Obama’s statements about his support for Israel at the UN and towards the Palestinians. The fact is that it is Obama’s hostile position towards Israel that fuelled the Palestinians’ rejection of negotiations with Israel. As Mahmoud Abbas told the Washington Post’s Jackson Diehl, Obama’s demand for a Jewish building freeze convinced him that he has no reason to hold talks with Israel.

Then there is his “support” for Israel at the UN. The fact is that the Palestinians only sought a UN Security Council resolution condemning Jewish construction in Jerusalem and Judea and Samaria because Obama made them think that he would support it. It was Obama after all who called Israeli settlements “illegitimate,” and demanded an abrogation of Jewish building rights outside the armistice lines.

The same is the case with the Palestinian decision to have the UN accept “Palestine” as a member. In his September 2010 address to the UN General Assembly Obama called for the establishment of a Palestinian state within a year. It was his statement that made the Palestinians think the US would back their decision to abandon negotiations with Israel and turn their cause over to the UN.

So in both cases where Obama was compelled to defend Israel at the UN, Obama created the crisis that Israel was them compelled to beg him to defuse. And in both cases, he made Israel pay dearly for his protection.

The fact is that Obama’s actions and his words have made clear that Israel cannot trust him, not on Iran and not on anything. The only thing that has been consistent about his Israel policy has been its hostility. As a consequence, the only messages emanating from his administration we can trust are those telling us that if Obama is reelected, he will no longer feel constrained to hide his hatred for Israel.

What these messages make clear is that if our leaders are too weak to stand up to Obama today, we will pay a steep price for their cowardice if he wins the elections in November.