'Root of conflict is refusal to accept Jewish state' 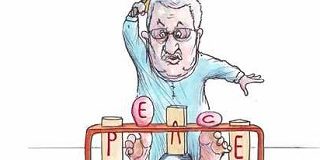 Prime Minister Binyamin Netanyahu reiterated on Wednesday that the root cause of the Israeli Palestinian conflict is “the persistent (Palestinian) refusal to accept a Jewish state within any boundaries.”

Speaking at a synagogue in the Netherlands during a visit to the country, the prime minister recalled that Israel places no preconditions on the start of negotiations. But, he added, “We cannot end the negotiations until we start them.” The synagogue, which survived the Nazi invasion in 1940 unscathed, was built in 1671-1675 and at the time it was the largest synagogue in the world. There is no electricity in the building which is lit, instead, by 613 candles.

Israel, he said, “is a beleaguered democracy confronting great threats and challenges,” adding that “there are those who cast Israel as a pariah state every time we exercise the inherent right of self defense.”

“I can tell you that our soldiers go through unprecedented steps to keep Palestinian civilians out of harms way.” There are some people who call Israeli soldiers war criminals, he said, but thanked Holland for not joining them.

“I commend the Netherlands as one of the few countries who doesn’t go along with this,” he said, noting that it opposed the Goldstone report.

Netanyahu also  praised the joint Dutch-Israeli stand against a nuclear Iran, saying that sanctions must be imposed against Iran’s central bank. “I think those sanctions should be applied now.”