Iran closer to the bomb than world realizes? 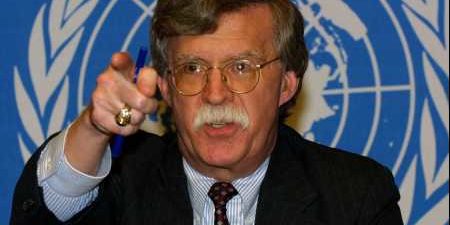 A report that Iran is about a year away from having the capability to build a nuclear bomb may be too optimistic, contended John Bolton, former U.S. ambassador to the United Nations.

“I worry the publicly available information is giving only a very small picture and that Iran is actually even much further along,” Bolton said today in a radio interview.

Bolton was on “Aaron Klein Investigative Radio” on New York’s WABC Radio. The former ambassador was asked about a statement from a former head of U.N. nuclear inspections claiming Iran is now just a year or so away from having enough enriched uranium to assemble a nuclear bomb.

Olli Heinonen wrote in an article published earlier this week that Iran made this advancement after switching production of its higher-grade enriched uranium to a new, underground site.

Reacting to the one-year timeline, Bolton stated, “I think it can be even less than that.”

The interview can be listened to at the Klein Online website.

Continued Bolton: “They’ve got, by publicly available information from the International Atomic Energy Agency, enough low-enriched uranium that if enriched up to weapons grade would be enough for four weapons.”

“So they’ve got more work to do, but they are already well on their way,” he said.

Bolton told Klein that 2012 will be a key year to stop Iran’s nuclear program.

“Even Secretary of Defense Panetta said last month that Iran could have a nuclear device within a year,” Bolton argued. “So they are very close, and obviously if they stepped up their efforts and worked harder, they may well be able to do it before then.

“So this is a clear and present danger,” he continued, “and I think it’s one of the reasons why you see the tension now in the region and why 2012 is going to be such an important year.”

In his article last week, Heinonen, who was the IAEA’s director-general until 2010, said that building a stock of 250 kg of 20-percent enriched uranium did not mean Iran could deploy a bomb without further engineering work.

Still, he allowed that 20-percent enriched uranium could within weeks be further purified to the 90-percent necessary for weapons grade.