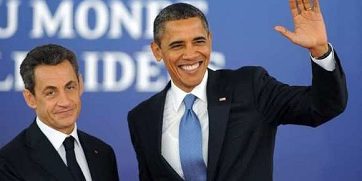 There’s nothing like a “live mic moment” when it comes to getting the unvarnished truth.

Yet it is hard to decide which part of this story is more revealing: the incident itself, or the subsequent reaction by the Fourth Estaters whose commitment to the standards of journalistic integrity — or perhaps more accurately JournO-listic integrity — seemingly never reach the bottom of an apparently bottomless barrel.

The tale begins at the summit of G-20 nations in Cannes. After meeting with reporters for a presser, French president Nicolas Sarkozy and our very own Barack Obama retreated to a private room to continue their conversation. Unfortunately for our dynamic duo, the microphones they were wearing remained on and a private conversation became embarrassingly public.

In the first part of the exchange between the two men Obama criticized Sarkozy for not giving him a heads-up on the fact that France would be voting in favor of the Palestinian membership bid to join UNESCO. That’s the same UNESCO which had its portion of U.S. funds cut off by an American Congress which just can’t find any humor — or legality (U.S. law bars funding any organization which admits Palestine as a member before it reaches a peace deal negotiated with Israel) — in subsidizing terrorist-abetting organizations with taxpayer funds.

It should be noted that the president hardly agrees. “The United States remains deeply committed to UNESCO and its noble mission to build peace in the minds of men and women,” said U.S. envoy to UNESCO, David Killion — who stressed that continuing U.S. participation was not in doubt. “Despite the challenges ahead, we pledge to continue our efforts to find ways to support and strengthen the important work of this vital organization.” In other words, in a reaction which is rapidly becoming the modus operandi for this administration, Obama and company are going to do their best to figure out a way to ignore Congress and do as they please.

That’s the non-juicy part of the exchange between Sarozy and Obama. The juicy part was about Israeli Prime Minister Benjamin Netanyahu. “I cannot stand him. He is a liar,” said Sarkozy. Not to be outdone Obama reportedly replied, “You’re fed up with him, but I have to deal with him every day!”

That sure lets the cat out of the proverbial bag, doesn’t it? Nothing like a Wiki-leaks kind of moment for confirming what a lot of Americans — with the notable exception of comatose Jewish American liberals — have long suspected regarding the president’s “unstinting commitment” to Israel. Poor Barry has to deal with the leader of a nation surrounded by people who are looking for any opportunity to annihilate it “every day!” to use the president’s words in a different context. No doubt as I write this DNC leader Debbie Wasserman-Schultz is manning the brigades, once again imploring non-liberal Jews not to make the president’s positions on Israel a campaign issue in the 2012 elections. Good luck, Deb. You’re going to need it.

Yet according to YNet News if it were up to the journalists who heard the exchange, Wasserman-Schultz wouldn’t have needed any luck at all:

“A member of the media confirmed Monday that “there were discussions between journalists and they agreed not to publish the comments due to the sensitivity of the issue.”

“He added that while it was annoying to have to refrain from publishing the information, the journalists are subject to precise rules of conduct.”

What conduct? Because Sarkozy’s office asked journalists not to turn on their headsets until the conference began, the comments were considered private, according to French media “traditions.”

That excuse ostensibly covers the collective behinds of the French reporters. What about everyone else? What reporter in his right mind would sign anything that prevents him from reporting on a story made available, not by subterfuge or anything else resembling illegality, but by the carelessness of two world leaders? Since when did a legitimate “gotcha” moment become off limits to the press?

Obama, Sarkozy and Netanyahu have all declined to comment on the story. No doubt. Obama and Sarkozy are probably embarrassed. Netanyahu is probably adhering to one of the oldest political axioms of all: when your adversaries are making asses of themselves, it’s best to step aside and let them do it.

They just did it.