A cataclysmic regional war is coming to the Middle East 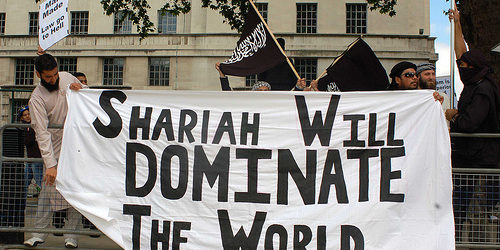 War is on its way in the Middle East as Muslim countries are determined to force a showdown over the future of Israel, Ronald Reagan’s assistant defense secretary Frank Gaffney warned in an exclusive Newsmax.TV interview.

“I’m afraid there’s a war coming, a very serious, perhaps cataclysmic regional war,” he said. “It will be presumably over, at least in part, the future existence of the state of Israel. It may involve all of its neighbors, as they have in the past, attacking Israel to try, as they say, to drive the Jews into the sea.

“It may involve the use of nuclear weapons,” Gaffney predicted. “But whatever form it takes and whenever it occurs, it is unlikely to be contained to that region, and we must do everything we can to prevent freedom’s enemies from thinking they have an opportunity to engage in that kind of
warfare.”

That means standing “absolutely, unmistakably” as one with Israel and doing everything to prevent Iran getting its hands on nuclear weapons.

Gaffney, who now heads up the nonprofit Center for Security Policy in Washington, D.C., was speaking on the day that the “moderate” Islamist party Ennahda claimed victory at the ballot box in Tunisia and the day after Libya’s new rulers declared that country will be run on Islamic principles and under Sharia law.

Gaffney does not believe Ennahda is really a moderating force. “I don’t believe there is such a thing as a moderate Islamist party,” he said. “The challenge with Islamists is that they seek to impose what they call Sharia on everybody, Muslim and non-Muslim alike.

“They may, as a matter of tactical expediency, choose to do so in incremental ways, often nonviolently, at least initially.

“The problem is that, because ultimately they must — according to Sharia, according to what they believe is God’s will — make everyone feel subdued in order to achieve their God-mandated direction, they will not remain moderate. They will not be satisfied with anything less than the ultimate supremacy of Sharia and they certainly will not resist the use of violence when it becomes expedient to get their way.”

Gaffney foresees a rising tide of Islamist governments growing throughout Middle East and North Africa and spreading even further.

“We’re witnessing not just the violent kind of jihad that these Islamists believe God compels them to engage in, but also, where they must for tactical reasons, a more stealthy kind, or civilizational jihad as the Muslim Brotherhood calls it. We’re witnessing that playing out, not only in places in the Middle East but also in Europe, in Australia, in Canada and here in the United States as well,” he said.

The spread of Sharia, which Gaffney said often is referred to as “Communism with a god,” is “the most urgent and grievous challenge we face as a free people.

“Those who follow this program of Sharia believe that God is directing them to engage in jihad or whatever form of warfare is necessary to accomplish their goals . . . .Through stealth, they have successfully penetrated important parts of the free world including our own government and civil society institutions.”

The Obama administration has to stop “embracing” the Muslim Brotherhood, Gaffney said.

“This is legitimating our enemies,” he said. “It is facilitating their influence operations and their penetration and it greatly increases the prospect that they will be successful at what the Muslim Brotherhood’s own documents indicate is their desire, which is to destroy western civilization from within.”

Gaffney noted that Ennahda had won what appears to be a clean election in Tunisia, but that doesn’t mean there ever will be another vote there.

“The problem is not simply democracy. People are pointing to Tunisia as a perfect example of democracy at work. Democracy is fine if all you want is one-man-one-vote one-time. That is precisely what the Muslim Brotherhood and its like-minded Islamist friends want.”

The Obama administration must apply pressure to ensure that democracy has a future there and elsewhere in the region, Gaffney said.

“The president and his administration are not even pursuing that,” he said. “What we are likely to wind up with, not just in Tunisia, not just in Libya, not just in Egypt, but probably in due course in Syria — as we have in Lebanon, as we have in Gaza and probably will have down the road in Yemen, Bahrain, maybe Saudi Arabia — is the takeover, the unmistakable takeover, perhaps through the ballot box, of people who will not seek or allow others freedom, who will impose Sharia and who will use whatever resources they amass as a result, not only to suppress their own people, but to endanger us.”