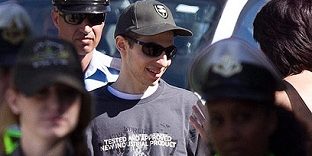 Noam Shalit, father of former Hamas captive Gilad Shalit told reporters on Thursday that his son, who was freed after nearly five and a half years in captivity, was doing as well as can be expected.

“Over all, Gilad is doing well. He is under IDF doctors’ care. As you’ve all seen, he’s begun going out of the house a little bit, riding his bicycle, he wants to take walk, he’s playing some ping-pong and he’s seeing some people, meeting childhood friends.

“His appetite is fine, but he does have trouble sleeping,” Shalit continued. “He needs time to adapt… it’s a transition from being isolated for five and a half years, nearly 2,000 days without daylight. As I said, he is suffering from the effects of sunlight deprivation. We hope he will adapt and regain a sense of normalcy soon.”

As for the media’s clamoring to speak with Gilad, his father said: “I understand that the media wants to see him, but he needs time. He’s in no condition… he just can’t meet so many people at once.”

Pressed harder, Shalit senior reminded reporters that “Gilad is still a soldier and must follow the IDF Spokesperson’s orders. He is in no condition for a press conference.”

In response to a question quoting Hamas’ statement that Shalit was not tortured in captivity, his father said: “I suggest you take anything Hamas says with a grain of salt. Gilad underwent very difficult things during his captivity. I won’t go into that now… His treatment did improve a little bit over time.”

Gilad, he said, “talks to us and shares what he can. I don’t know how I, or you, would have survived this long in captivity, so considering what he’s been through he is doing okay.

“The most important thing now is ensuring he readapts gradually. Gilad is not one to make any special requests – he is taking things as they come. We are trying to give him everything we can.”

As for the days ahead, Noam Shalit said that his son will continue to follow his doctors’ orders: “More rest, more care, and gradually getting his life back together.”

As for the family, Noam Shalit told reporters that “while the focus now is not the holiday, but rather Gilad and his rehabilitation, this is the first holiday celebrated (here) in a long time.

“The family is busy with caring for Gilad and seeing to his every need. I hope we all can regain our normal life soon,” he concluded.