Obama's bomb deal with Israel raises the spectre of war 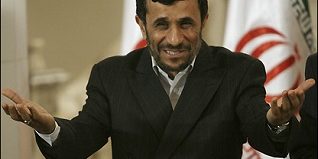 BY PAUL KORIG, GLOBE AND MAIL—

Barack Obama may be widely regarded at home as the least pro-Israeli president in decades, but he has secretly okayed giving the Jewish state a bunch of special bunker-busting bombs– ideal for destroying Tehran’s ruling mullahs’ nuclear ambitions and so powerful that George W. Bush blocked handing them over.

Capable of penetrating deep beneath the surface, the bunker-busters would be crucial for any air strikes at Iranian nuclear sites. Mr. Netanyahu has wanted the bunker-busters for years and, as first reported by Newsweek, Mr. Obama agreed to hand over 55 of the sophisticated and powerful weapons.

Given Israel’s track record of pre-emptive bombing strikes to destroy nuclear sites in neighbouring nations and Iran’s ambitious and suspicious nuclear program, the American bunker-busters may increase the chance of another Middle East war. Iran’s unpredictable and bellicose President Mahmoud Ahmadinejad has vowed to wipe Israel off the map. Iran continues to defy international sanctions with a clandestine nuclear program. Meanwhile, Mr. Netanyahu now has the means to carry out his threat that “Iran will not acquire nuclear arms, and this implies everything necessary to carry this out.”

The bunker-busters will fit nicely on Israel’s top fighter-bomber, the F-15. Dropped from up to a dozen kilometres away, the needle-nosed, 2.5-tonne bomb dives to its target, correcting its course so precisely as it plunges that it will fly down a ventilation stack or slice through six metres of concrete or 30 metres of dirt before exploding with colossal force.

That’s hardly the sort of thing used against the rabbit’s warren of sub-surface tunnels used by Hamas to smuggle small arms and rockets into Gaza from the Egyptian Sinai near the Canada Gates.

The bunker-buster bombs, and Mr. Obama’s staunchly pro-Israeli stance last week at the United Nations where he vowed to block a Palestinian bid for recognition, have buoyed his approval ratings in Israel.

Last spring, when he dared voice a return to “1967 lines” as the basis for peace, barely 12 per cent of Israelis regarded him as “pro-Israel.” Pollsters recorded it at 54 per cent this week.

Israel has its own – undeclared and therefore illegal under international law – nuclear arsenal which its western friends mostly ignore as they decry and denounce the outlawed efforts of Muslim states – including Pakistan and Iran – to either build or add to their stockpiles of nuclear warheads.

In 2007, Israeli warplanes bombed a Syrian reactor of North Korean design. Striking Iran, both further away and further along the nuclear-weapons development path and with widely dispersed and deeply-buried sites, would be more challenging militarily. The bunker-busters may be a hammer Israel can’t use unless it has the tacit approval of Washington. It’s not clear if Mr. Obama retained the right to approve any use of the bunker-busters.