Netanyahu's Speech and the Deafening Silence 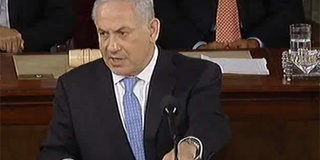 Those of you who saw Bibi’s speech at the UN – that Temple of Hypocrisy and Moral Turpitude – will have noticed the polite but tepid applause from a few along with the deafening silence from oh, so many of the international delegates.

I fear that calling, nay begging, for peace by successive Israeli Prime Ministers is an exercise in futility.

The stark fact, which nobody wants to hear, is that Islam will never make peace with a non-Muslim state, especially if the Muslim foot trod triumphal upon that same territory once occupied in the name of Allah.

Even though the Jewish people in the Land of Israel pre-date Islam by millennia, nevertheless for Muslims in general, and for those Arabs who call themselves Palestinians, all the territory is theirs and they will call it by its fraudulent name: Palestine, which is a name that had nothing to do with Arabs living in the area.

As I have written before, if Israel shrank to just one downtown city block in Tel Aviv, it would still be reason for an all-out war of extermination by the Arab and Muslim world.

Until people understand that it is not “radical” Islam which creates the horror and misery that burdens all mankind but simply Islam, there can be no understanding of the existential threat we face in what is left of the Free World.

There is no moderate Islam and no radical Islam; there is only Islam. It is a bitter pill to swallow and no amount of sugar coating can ever make it palatable.

Netanyahu uttered the words ”West Bank” over and over again. This is a fundamental mistake. He must, and all of us must, call the territory by its Jewish biblical and ancestral name, Judea and Samaria, and then call it “aka the West Bank.”

So it is the same with the counter-productive word, “settlements” – which in the English language is a pejorative term. These Jewish communities are not the outposts of an alien presence in another people’s land. No. These are Jewish villages and towns populated by the Jewish descendants of biblical and post-biblical native Jewish ancestors who for untold generations farmed and tended the hills and valleys of this Jewish heartland: Judea and Samaria.

In conclusion, the endless and repeated begging for peace from a perverse and irretrievably hostile Muslim and Arab world must stop. The reality is desperately hard to acknowledge and accept, but it is an Islamic fact that Islam and its adherents will never make peace with non-Muslims.

The Muslim is enjoined by the later writings in the Koran and Hadith to lie to the non-Muslim if it advances Islam in the world. The Muslim must break all and every agreement entered into with non-Muslims if it advances Islam in the world. This is the bitter reality non-Muslims must come to understand for if it is dismissed it guarantees war and all the horror of violent and evil terror perpetrated in the name of Allah.

For Israel the course is clear. The Arab and Muslim world has proclaimed everlasting enmity towards the non-Muslim; those which Islam arrogantly dismisses as infidels. Thus, no Muslim state or its leader will ever recognize Israel as a Jewish state for that is to deny Islam; a word, by the way, which means submission – not to the will of the people as in a democracy – but only to the will of Allah.

That is an empirical fact.

The Muslim Arabs who call themselves Palestinians have made their bed. Now they must lie in it for their words of deceit and venom have consequences. Historical correctness must always trump political correctness.

That being said, Jordan is Palestine.

That is also an empirical fact.

And one other fact. A Two-State Solution – that appalling euphemism – describing Israel and a Muslim terror state existing within the narrow strip of land from the Mediterranean Sea to the River Jordan will be for the Jewish people a repeat of that earlier dread euphemism, one the Nazis used to describe their extermination of the Jews: “The Final Solution.”

Victor Sharpe is a freelance writer with articles and essays published in FrontPageMag. com, Townhall. com, Outpost, the Wall Street Journal, the London Daily Telegraph, Israel Alert, Jewish Review and other publications. He is the author of the two-volume “Politicide: The attempted murder of the Jewish State” and “The Blue Hour and Other Strange Tales.”