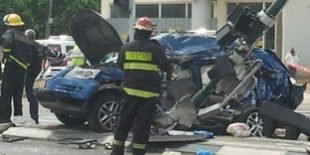 Monday’s attacks comes after a similar attack in May when a young truck driver from the Arab town of Kafr Kasim caused terrifying destruction in south Tel Aviv after ramming his truck into several vehicles on Rehov Bar-Lev, in what police suspect to be a “lonewolf terror attack” that killed one man and injured 17 others.

The 20-ton Volvo truck, driven by the 22-year-old man, departed Kafr Kasim the morning of the attack and entered Tel Aviv via Route 4, driving through the Mesubim Junction. As the driver approached the Hatikva neighborhood, he struck and ran over several cars. The truck driver continued on, smashing into a black jeep, a white Fiat car, flattening a road sign, and striking other vehicles, before suddenly swerving into the opposite lane, running over a moped – seconds after its driver leapt off – then finally smashing sideways into an Egged bus, that just dropped off its last passenger.

The attacks are also reminiscent of the so-called “Jerusalem bulldozer attacks” three years ago that started on July 2 2008 when terrorist Husam Taysir Dwayat carried out a lethal bulldozer rampage on Jaffa Road which killed three people and wounded dozens before he was killed.

Three weeks  later, tractor driver Ghassan Abu Tir, a 22-year-old resident of the east Jerusalem neighborhood of Umm Tuba who was working on a construction project on a side street near the King David Hotel, pulled into King David Street and repeatedly crashed his vehicle into a No. 13 Egged bus, which managed to escape, and then rammed into five cars, one of which he overturned, before being shot dead by a motorist who happened by the scene. 15 people were wounded in the attack.

Two months later, east Jerusalem resident Kasem Mugrabi drove his BMW into a a crowd in Jerusalem’s Tzahal Sqare near the Old City. 17 people were wounded, most of them soldiers, before he was shot dead by an IDF officer.