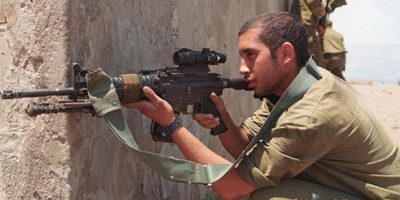 The Israeli army (IDF) has been busy procuring new weapons for its soldiers in preparation for the aftermath of the Palestinian Authority’s unilateral statehood bid in September.

It is widely expected that after the Palestinians petition the UN to recognize a Palestinian mass popular violence will break out against Israel.

If the UN votes to recognize “Palestine,” most Palestinians want their own armed forces to sieze territory from Israel, including eastern Jerusalem.

If the UN rejects the bid, Israel believes the various Palestinian terror groups will launch a new intifada (terrorist uprising).

In either case, Israel knows all too well how the international community will respond if the Jewish state uses deadly force to defend itself.

As such, the IDF is distributing weapons with reduced lethality to front-line units. Among these weapons is a new receiver for the standard-issue M-16 assualt rifle that allows it to fire 0.22 mm rounds, which are not lethal from long distance.

Israeli snipers will also be issued non-lead impact bullets that do not penetrate skin, but still deliver a painful blow.

The army is also preparing to deploy new non-lethal weaponry, including the “Scream,” which uses bursts of sound to disorient rioters, and the “Skunk Bomb,” which needs no explanation.

Despite Israel’s extensive and costly efforts to avoid casualities in the expected coming violence, precedent suggests that the international community will still find an excuse to blame Israel for the situation.