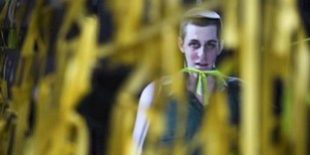 Hundreds of people began gathering at the Schalit family tent set up outside the Prime Minister’s Residence in Jerusalem Saturday afternoon to offer their support to the family’s demand that their son, Gilad, be released from Hamas captivity in the Gaza Strip. Saturday marks the fifth anniversary of Gilad Schalit’s kidnapping by Hamas terrorists along the Gaza border.

At 7 p.m., a rally is planned at the Cesarea Museum near Prime Minister Binyamin Netanyahu’s private residence in a planned show of public pressure on the prime minister to advance a prisoner exchange deal that would free the IDF soldier. The event, which is being billed as a “march on Cesarea,” is intended to show the prime minister that “his political future is directly related wellbeing and release of Gilad,” organizers said.

Beginning at 8 p.m., a 24-hour live broadcast will begin showing various celebrities and former POWs sitting inside a makeshift dark closet-like prison cell – for one hour each – to reflect the conditions of captivity Schalit is living in. The webcast can be viewed on JPost.com.

On Sunday at 8:30 a.m., supporters are expected to join the weekly protest held by Gilad’s parents, Noam and Aviva, outside the weekly cabinet meeting in Jerusalem. Noting the fifth anniversary of Schalit’s kidnapping and the failure of government efforts to release him, the protesters plan to ask government ministers: “Dear Minister, five years have past. In captivity there is no tomorrow. When will you save Gilad?”

Zvi Schalit, the grandfather of captive IDF soldier Gilad Schalit, said Saturday that Defense Minister Ehud Barak is attempting to broker a prisoner exchange with Hamas. Speaking at a rally held at Kerem Shalom, the site where he was captured, he told the crowd that conflicts with Prime Minister Binyamin Netanyahu were delaying progress, Israel Radio reported.

Saturday marks exactly five years since Schalit was kidnapped in a cross-border raid. Despite many attempts by international agencies, his family has been completely denied access to him.

Coinciding with the somber anniversary, the United States on Friday called on Hamas to “release immediately,” criticizing the Gaza group’s violation of “international humanitarian demands.”

The US joined France, and Ban Ki-moon of the UN Friday calling for the soldier’s immediate release on humanitarian grounds, criticizing the groups disregard for a recent International Red Cross call on Hamas to allow Schalit’s family contact with their son who is entering his sixth year in captivity on June 25.

France “has not forgotten Gilad Schalit,” French Foreign Affairs Minister Alain Juppe said on Friday in a special communique published on the website of the French Embassy in Israel, a day before the Schalit family marks five years since their son was captured by Hamas.

“On the eve of the sad anniversary of the fifth year of Gilad Schalit’s captivity, I want to reiterate that the situation of our compatriot, held in defiance of the most basic principles of international humanitarian law, is unacceptable,” Juppe said in the statement. “It is also unique: Gilad Schalit is, today, the French hostage who has been held in captivity the longest.”

The French foreign minister added, “We’ve mobilized our partners and continue to work tirelessly for release, in coordination with other ongoing mediation efforts.”

Paris continues to demand that the Red Cross be allowed to visit Schalit, Juppe said.

“For Gilad Schalit, there is no Arab Spring: The wind of freedom blowing through the region has not reached him. Nobody can be indifferent to the drama he and his family have experienced for nearly five years now.

Meanwhile, officials in the Gaza Strip said that meeting their demands is the only way the captive soldier can be returned home.

Spokesman for Gaza’s Popular Resistance Committee Abu Mujahid said that Schalit will not be released until all of his captors’ demands are met, Army Radio reported. He also mentioned French involvement in efforts to release Schalit while threatening more kidnappings. “Gilad was not kidnapped in Paris – he was a soldier whose mission was to kill women and children,” Abu Mujahid said.

Earlier this week, 12 human rights organizations called for an immediate end to Hamas’s “inhumane and illegal treatment” of the captured soldier.

To mark the fifth year of Schalit’s captivity, Amnesty International said in a press release that it is circulating a petition to its activists worldwide demanding that Hamas ease the suffering of Gilad and his family. The petition will be presented to Hamas prime minister in Gaza Ismail Haniyeh.

Secretary General of the UN Ban Ki-moon also called on Friday for the immediate release of kidnapped Israeli soldier Gilad Schalit, pledging continued support of the UN for achieving this goal.

Ban also joined the International Red Cross in calling on Hamas to protect Schalit’s life, treat him humanely, prove that he is alive, and provide his family with the ability to have contact with their son.