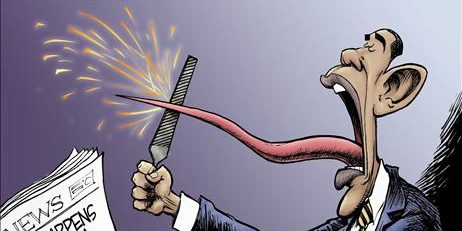 On Friday at 6 p.m. the Obama administration promise to fix the disreputable UN Human Rights Council by becoming a member died a predictable death at the UN General Assembly. Knowing they were headed for certain defeat, Assistant Secretary for the Bureau of International Organization Affairs, Esther Brimmer, spoke to a Washington institute on Wednesday touting the President’s “reform” accomplishments from inside the UN’s top human rights body. And her whitewash was supplemented at the end of the week by a barrage of statements and press releases from the State Department. None of it passes House Speaker John Boehner’s “straight-face test” for Obama’s foreign policy.

While the GA was nailing the coffin shut on council reform in New York, the council itself was wrapping up its latest session in Geneva with its usual systematic efforts to demonize the State of Israel. Though Brimmer’s speech included a disingenuous declaration that US membership in the council was especially beneficial for Israel, Friday’s events will solidify the growing perception of the president’s dangerous disinterest in Israel’s welfare.

The council was the “reformed” version of the UN Human Rights Commission, which once flaunted a Libyan chair. The Bush administration and its UN ambassador John Bolton opposed this 2006 “reform” on the grounds that the changes were superficial and there were no membership criteria for election to what was, after all, the UN’s top human rights body. The European Union, however, was bought off by including a five-year review plan. That review ended Friday with the adoption of a GA resolution that kicked any further reconsideration down the road “10-15 years.”

From the day it began, the council has proved to be even worse than its predecessor. Sitting in judgment on human rights violations worldwide are such luminaries as China, Cuba and Saudi Arabia. Member Libya had no difficulty being elected, and its suspension didn’t occur until March of this year, when the numbers of dead finally proved too embarrassing. But throwing women in jail for driving, outlawing freedom of religion, rendering homosexuality a capital offense and periodically cutting off heads haven’t made a dent in Saudi membership.

ON THE contrary, the most recent council election, which took place on May 20 at the GA, looked like this. Just before the vote, candidate Kuwait gave each state’s representative in the Assembly Hall a little box decorated with its flag and containing four delightful fresh dates. Austria gave delegates a package of cookies with a pretty bow marked “taste of Austria.”

Costa Rica distributed a colorful red wooden toy cart. India handed out “high elevation darjeeling tea,” and Romania gave out a very nice large calendar. Along with Burkina Faso, where most of the female population has undergone female genital mutilation – aka torture – they were all duly elected.

With their actual human rights credentials off the table, council members adopted a fixed agenda of only a few items to govern their proceedings. One item is devoted to Israel alone and one to all other 191 UN member states. The Human Rights Commission spent 40 years adopting country-specific criticisms, a third of which condemned Israel. Fifty percent of the “reformed” council’s country-specific resolutions and decisions are devoted to Israel-bashing. There have been 12 special sessions in the last five years, and half of them have been on Israel alone. There has been only one “urgent debate” on a country – Israel. There have been more human rights reports commissioned on Israel than on any other state. And only one country is not allowed even to attend the lobbying and information-sharing regional meetings associated with the council sessions – Israel – while “Palestine” is invited to all of them.

Rather than discredit a body that calls itself a human rights authority but reeks of discrimination, and is tasked with promoting tolerance but provides a global platform for hate-mongering, Obama decided to give it American credibility and taxpayer dollars. His No. 1 excuse was the promise to reform it from the inside.

Here’s Secretary of State Hillary Clinton and UN Ambassador Susan Rice on March 31, 2009, explaining the reason to join: “The Council… is scheduled to undergo a formal review of its structure and procedures in 2011, which will offer a significant opportunity for Council reform.”

US Ambassador to the Council Eileen Donahoe, in a September 13, 2010, New York Times editorial, called the review “a serious self-reflection exercise” and claimed that “if we do not sit at the table with others and do the work necessary to influence the process, US values and priorities will not be reflected in the outcome.”

Even as late as March 25 of this year, a poker-faced administration spokesperson said: “The United States… looks forward to working with UN member states as the HRC review process continues in New York. There is still room to… ensure greater scrutiny of the human rights records of candidates for election to this body.”

ON FRIDAY, those promises were shown to be utterly fraudulent. Every major recommendation that American negotiators made over a process spanning many months, including instituting membership criteria and changing the discriminatory anti-Israel agenda, was rejected. Only four states voted in the GA against the outcome of the non-reform reform: Israel, the United States, Canada and Palau.

Gloating over the total defeat of the Obama plan were Syria (speaking for the Arab group), Russia (speaking for a revealing “cross-regional group” comprising Algeria, Belarus, Bolivia, China, Cuba, Iran, Nicaragua, Pakistan, Syria, Venezuela, Vietnam and Yemen), Tajikistan (speaking for the Organization of the Islamic Conference (OIC)), Iran and Egypt. Syria called the president’s bluff this way: “Warmest thanks… Our efforts were crowned by arriving at the document before us today… The main objective of our work was… not reform because the Council was already a reform of the Commission.”

Islamic states have reason to be pleased. The council majority is held by a combination of two regional groups – African and Asian – and OIC members are the majority on both of these groups, thus giving them the balance of power.

The consequences of this political landscape were reinforced by Friday’s events at the council session in Geneva. The council wrapped up its latest session by adopting one more resolution on Israel – this time about the eight Turkish extremists killed a year ago trying to ram a legal blockade of terrorist-run Gaza. There was no resolution on Syria – further condemnation by the council was put off until next session, three months away. And nothing from the council on Yemen, on account of insufficient data. Of the eight votes in total held at this session, the US was on the losing side for six of them.

According to the Obama administration, however, the current US approach to the UN is supposedly good for Israel. In Brimmer’s words, the council has “improved as the result of direct US engagement. If we cede ground, if our engagement in the UN system is restricted – these bodies likely would be dominated by our adversaries. A scenario… not good for the United States and certainly not for Israel.”

The Obama line about knowing what is in Israel’s best interests is beginning to wear very thin. The council’s vote on the flotilla resolution was 36 for, eight abstentions and one against – the United States. US membership has made no difference to the outcomes on Israel. But it has given those outcomes a credibility that they don’t deserve.

After Friday’s GA vote, Obama diplomat John Sammis labeled the council’s “effectiveness and legitimacy” as “compromised,” called its agenda “unfair and unbalanced,” and said its membership policy “discredits, dishonors and diminishes” the body. Talk is cheap. The decent thing for the US to do after finally coming to such a conclusion would be to announce its departure or at least allow its term to expire next year.

But Obama has done nothing of the kind. Ensuring the American team had no bargaining power, the administration declared in March – three months before the end of negotiations and a whopping 18 months in advance of the next election – that the US would run for a second term.

Not coincidentally, on Friday the administration decided to circulate a list of the council’s accomplishments at the last session. In addition to itemizing mere statements from groups of countries on issues that the council itself refused to handle, they pointed to the Council decision to launch a new study of discrimination and violence against individuals based on their sexual orientation and gender identity.

For Obama, progress on other human rights issues takes priority over the unequal treatment of Israel and Jewish self-determination. It’s an old trick, playing minority groups off against one another. But at the end of the day there is no escaping the fact that in the name of human rights, the administration has trashed the fundamental norm of human rights protection – equality. And genuine human rights advocates ought to know only too well how exemption clauses on human dignity are bound to turn out.