The spy 'scandal' that isn't… 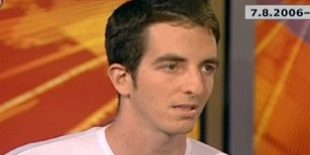 You need not be privy to classified intelligence information or have an intimate familiarity with the inner workings of Israel’s undercover agencies to grasp that Egyptian allegations of espionage leveled against against American-born Ilan Grapel, 27, are baseless.

“Delusional” was the way Grapel’s distraught mother Irene aptly put it, while father Daniel chose “totally false.” A senior government official traveling with Prime Minister Binyamin Netanyahu in Rome added, as if it were necessary to make such clarifications, that there was not a shred of truth to the claim that Grapel was connected to the Mossad.

Grapel, known for his left-wing political views and love for Arabic, is a third-year law student from Emory University in Atlanta, Georgia. He has been in Cairo since May 10 volunteering at St. Andrews Refugee Services as part of a program to advance democracy and constitutional rights in the Middle East. Something of a joker, Grapel cited on his Facebook page “preaching” at Al-Azhar University in Cairo as his job.

Egyptian officials do not merely lack a sense of humor, however. They are cynically exploiting the fact that Grapel made aliya and served as a paratrooper in the IDF (and was wounded in action during the 2006 Second Lebanon War) to remake him unfoundedly as a ruthless Mossad agent. A unit in the Egyptian security forces whose only job is to uncover Israeli espionage attempts has apparently concocted a story about Grapel to justify its own existence.

In this hallucinatory parallel world, young, adventurous Americans like Grapel are singled out and charged with outrageous, trumped-up charges: The Mossad, not Emory University, runs the absurd Egyptian security narrative, sent Grapel to Egypt to take advantage of a supposed “security vacuum” created in the wake of January’s Tahrir Square uprising. “Saeed,” a spokesman for Egypt’s general prosecutor, told CNN that Grapel, who had been followed “for months,” had been recruiting “informants” to provide Israel with vital military and political information. The purportedly “undercover” Grapel, who in actual fact openly posted his day to day activities on Facebook, was further alleged to have attempted to incite sectarian violence between Muslims and Christians (as if Egyptian Muslims needed any outside encouragement not already provided by radical Muslim religious leaders, who regularly incite against the embattled Coptic community).

Egyptian newspapers have lapped the story up, featuring it on their front pages Monday alongside photos of Grapel republished from his Facebook account. “Egypt arrests Israeli Intelligence Officer, a big blow to the Israeli Mossad Intelligence Agency,” one typically truth-deficient headline said.

SADDER STILL, it would be misleading to view the Grapel fiasco as simply a peculiar blip. Anti-Semitism and anti- Israeli sentiments run deep in Egypt. As Rivka Yadlin, a student of Egyptian anti-Semitism, pointed out two decades ago, “The abominable traits expressed in the behavior of Israel are perceived as singular, inherent and intrinsic in its very Jewish being. They are inherited within the Jewish community and are thus shared by the whole of Israel as well as by other Jews.” Little has changed since.

And Egyptians seem to have a particular fascination with the Mossad. Last December, for instance, when a 70- year-old German snorkeler washed up dead on the Red Sea shore with shark bites in her right thigh and right elbow, Egyptian officials claimed it was a Mossad plot. “What is being said about the Mossad throwing the deadly shark to hurt tourism in Egypt is not out of the question…,” South Sinai Gov. Mohamed Abdel Fadil Shousha was quoted as saying by state news site egynews.net. A month before, Mostafa al-Feki, the head of the Foreign Affairs Committee in Egypt’s People’s Assembly, claimed that the Mossad was behind violent clashes between Copts and Muslims. The fact that an increasingly Islamist Egyptian bureaucracy had refused to provide a construction permit for a new Coptic church was conveniently ignored by Feki.

WITH US State Department officials involved, it appears likely that Egypt will eventually relent and free Grapel. The sooner the better.

Those responsible for inventing the baseless accusations against him will doubtless never admit their folly, however. And what should give pause for concern – not just to Israelis but to all who value justice – is the ease with which such blatantly anti-Israel claims can be concocted and spread and believed by a captive Egyptian public regularly bombarded with anti-Israeli propaganda.

If the Grapel scandal is an indication of where the Arab Spring’s winds of change are headed, the portents are dismal indeed.