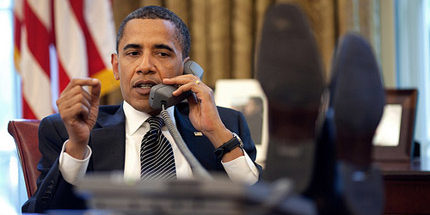 The only thing surprising about Barack Obama’s latest blow against Israel is that there are people who are surprised. As for a Palestinian homeland, that was never a big issue when the Arabs controlled that land, up to 1967.

Obama’s declaration that Israel must give up the land it acquired, after neighboring countries threatened its survival in 1967, is completely consistent with both his ideology of many years and his previous actions as President of the United States.

Whether as a radical student, a community organizer or a far left politician, Barack Obama’s ideology has been based on a vision of the Haves versus the Have Nots. However complex the ramifications of this ideology, and however clever the means by which Obama has camouflaged it, that is what it has amounted to.

No wonder he was moved to tears when the Reverend Jeremiah Wright summarized that ideology in a thundering phrase– “white folks’ greed runs a world in need.”

Israel is one of the Haves. Its neighbors remain among the Have Nots, despite their oil. No wonder that Barack Obama has bent over backward, in addition to bowing low forward, to support the side that his ideology favors.

Whether at home or abroad, Obama’s ideology is an ideology of envy, resentment and payback.

Israel is not simply to have its interests sacrificed and its security undermined. It is to be brought down a peg and– to the extent politically possible– insulted. Obama has already done all these things. His latest pronouncement is just more of the same.

One of the first acts of Barack Obama as president was to send money to the Palestinians, money that can be used to buy rockets to fire into Israel, irrespective of the rationale for the money.

They say a picture is worth a thousand words. A photograph that should tell us a lot about Barack Obama shows him on the phone, talking with Israeli Prime Minister Benjamin Netanyahu.

Obama was seated, leaning back in his chair, with his feet up on the desk, and the soles of his feet pointed directly at the camera. In the Middle East, showing the soles of your feet is an insult, as Obama undoubtedly knows.

This photograph was no accident. Photographers cannot roam around White House, willy-nilly, taking snapshots of the President of the United States as he talks to leaders of foreign nations.

It was a photograph with a message. No one would have known who was on the other end of the line, unless Obama wanted them to know — and wanted to demonstrate his disdain.

After one of his meetings with Netanyahu, Barack Obama simply told the prime minister that he was going upstairs to have dinner. You wouldn’t say that to an ordinary neighbor visiting in your home, without inviting him to join you.

Obama knew that. Netanyahu knew that. It was a calculated insult. And the American public would have heard about it, if so much of the media didn’t have such a hear-no-evil, see-no-evil and speak-no-evil attitude in its coverage of Barack Obama.

Visits to the White House by prime ministers of Britain– our oldest and staunchest ally– have likewise been downplayed and Obama’s visit to the Queen of England was likewise conducted without the respect normally shown to a monarch. One of Obama’s first acts upon reaching the White House was to return to the British embassy a bust of Winston Churchill, the most eminent statesman in Britain’s history.

All of this is consistent with Obama’s general approach to foreign policy– selling out our allies to curry favor with our adversaries. He flew to Moscow, shortly after taking office, to renege on the American commitment to put a missile shield in Eastern Europe, in hopes of getting a deal with the Russians.

Obama is politically savvy enough to know how to get his point across without blowing his cover.

The fate of the United States of America may depend on how savvy we the people are in seeing what he is doing– and how soon, before the situation becomes irretrievable.