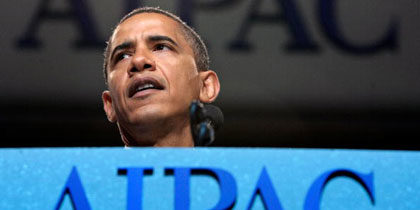 In a speech to the American Israeli Political Action Committee (AIPAC) on Sunday morning, President Obama tried to offer some clarification to his remarks on Thursday at the State Department where he stated that “The borders of Israel and Palestine should be based on the 1967 lines with mutually agreed swaps, so that secure and recognized borders are established for both states.”

Stung by an outburst of condemnation and criticism for those remarks – and a stern lecture from Prime Minister Netanyahu after their White House meeting – the president attempted to quell the controversy by reiterating America’s strong support for the state of Israel, and placing his comments on creating a Palestinian state based on the 1967 borders in the context of “mutually agreed swaps” of land that would alter those boundaries substantially.

By definition, it means that the parties themselves – Israelis and Palestinians – will negotiate a border that is different than the one that existed on June 4, 1967. It is a well known formula to all who have worked on this issue for a generation. It allows the parties themselves to account for the changes that have taken place over the last forty-four years, including the new demographic realities on the ground and the needs of both sides.

The president’s excuse for this significant change in US policy was the prospect of a vote at the United Nations this fall that would recognize Palestinian statehood – a turn of events that carries great risk for both Israel and America.

Note that Mr. Erekat said nothing about “mutually agreed swaps” of land. The reason is simple. As Dore Gold pointed out in the Wall Street Journal, Mr. Abbas does not believe in such swaps. “Mr. Abbas has said many times that any land swaps would be minuscule,” wrote Gold. It doesn’t sound promising when one side in negotiations rejects the other’s right to exist and refuses to talk about defensible borders.

As Netanyahu told President Obama at the White House on Friday, “hile Israel is prepared to make generous compromises for peace, it cannot go back to the 1967 lines because these lines are indefensible.” The Israeli prime minister also reminded the president that conditions on the ground in Israel had been altered over the past 44 years, with demographic changes putting much of the Israeli population outside the 1967 borders.

White House aides were said to be “infuriated” with Netanyahu’s “lecturing tone” after that Oval Office meeting with the president. But the Israelis had their own complaints about the president’s speech on Thursday beyond the border issue. The president was silent about the “right of return” that the Palestinians say is necessary for any peace agreement. Previous presidents have rejected this claim as unworkable. Also, Netanyahu rightly pointed out that the attack on Israel in 1948 resulted in two refugee problems; a Palestinian exodus that the Arab world did nothing about and the expulsion of Jews from Arab lands that Israel solved by absorbing the newcomers. The Israeli prime minister stated flatly that a return of Palestinian refugees to Israel would destroy the Jewish state. “”hat’s not going to happen. Everybody knows it’s not going to happen. And I think it’s time to tell the Palestinians forthrightly, it’s not going to happen,” he said.

In his AIPAC speech, the president seemed to sense the unease of his audience that his declaration about borders was a significant shift in Washington’s stance on how to achieve peace with the Palestinians. He spent most of the first part of the speech reminding AIPAC attendees of US diplomatic moves to assist Israel – especially at the UN – as well as giving an overview of how he believes he has improved the strategic partnership with the Jewish state.

But there is no getting around the fact that President Obama is the first US leader to state as policy that the 1967 borders should be the starting point for negotiations with the Palestinian Authority. Land swaps or no, by stating that the 1967 borders should include both a Palestinian and Jewish state, President Obama has gone further toward the Palestinian position than any previous administration. And he has done so at exactly the wrong time – the marriage of Fatah with Hamas, thus forming a terrorist state on Israel’s border.

The president answers that criticism by pointing out that the Palestinians intend to go to the United Nations this fall and attempt to get the UN to declare their sovereignty. He told the AIPAC conference that the Palestinians “recognize that there is an impatience with the peace process – or the absence of one,” and that this impatience is growing and “manifesting itself in capitols around the world.”

Dore Gold points out the fallacy of that position, writing, “Why should Mr. Abbas ever negotiate with Israel if he can rely on the automatic majority of Third World countries at the U.N. General Assembly to back his positions…?” While President Obama promised AIPAC attendees that the US “will stand up against efforts to single Israel out at the UN or in any international forum,” that would be cold comfort to Israel if the Palestinians succeed in isolating the Jewish state diplomatically with a UN vote on statehood.

While there is no chance that a Palestinian state can be voted into existence by the UN General Assembly, the very act of having a vote in the first place causes enormous problems for Washington. Any General Assembly vote would be passed on to the Security Council for ratification – and a sure veto from the US. The Obama administration is concerned that their carefully constructed “outreach” to Arabs would crumble in the face of such a veto. And the diplomatic capitol they would have to expend in trying to persuade other members like Great Britain, France, Russia, and China not to vote for Palestinian statehood might be needed for other issues like Iran’s nuclear program and assistance to new “democracies” as a result of the “Arab Spring.”

The consequences of a Palestinian statehood vote are unknown, but some analysts believe that it would set off riots in Gaza and the West Bank, perhaps even leading to another war. Defending Israel under those circumstances would be problematic at best, and the administration doesn’t want the complications that would result from a successful Palestinian effort to wring legitimacy from the UN.

But is the president correct in his analysis? Josh Block, a former AIPAC spokesman, now a fellow at the Progressive Policy Institute, who had criticized the president’s speech on Thursday, believes the president has successfully walked back his words, saying in an email to The Hill, “It reflected an important continuity of U.S. policy going back to President Johnson.” But others aren’t so sure. Bret Stephens, foreign affairs columnist for the Wall Street Journal, was full of skepticism when he told AIPAC attendees “”The issue isn’t where the line is drawn,” Stephens said. “The issue is the nature of the Palestinian state.”

This is what Prime Minister Netanyahu was trying to tell President Obama after their Oval Office meeting on Friday. All other issues pale in comparison to the notion that one side in these negotiations refuses, has refused, and continues to refuse to recognize the other party as deserving of the right to exist. Until that Ur issue is decided in favor of Israel, there can never be serious negotiations on the existence of a Palestinian state.

Rick Moran is Blog Editor of The American Thinker, and Chicago Editor of PJ Media. His personal blog is Right Wing Nuthouse.