The Land of Israel 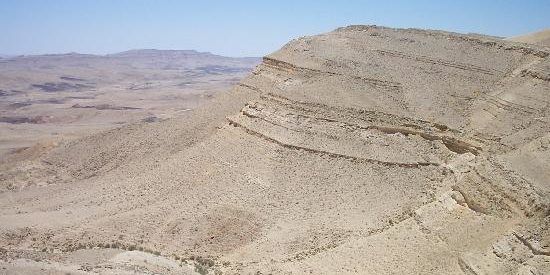 Israel, land of the Bible and the historic homeland of the Jewish people, is situated in the Middle East, along the eastern coastline of the Mediterranean Sea, and forms part of a land bridge linking three continents: Asia, Africa and Europe. In this land, the Jewish people began to develop its distinctive religion and culture some 4,000 years ago, and here it has preserved an unbroken physical presence, for centuries as a sovereign state, at other times under foreign domination.

Although small in size, Israel encompasses the varied topographical features and climates of a continent. In the north, the forested highlands of Galilee merge with fertile green valleys; sand dunes and farmland mark the coastal plain bordering the Mediterranean shoreline; the rocky peaks of the Samarian and Judean mountain ranges in the center of the country descend sharply to the semitropical Jordan Valley and the Dead Sea, the lowest place on earth. Mountainous deserts, stretching southward through the Negev and Arava, end at the Gulf of Eilat, the northernmost tip of the Red Sea.

The country’s temperate climate is characterized by much sunshine, with a rainy season from November to April. Total annual precipitation ranges from about 20-30 inches (50-75 cm.) in the north to just over an inch (about 3 cm.) in the far south. Regional climatic conditions vary considerably: hot, humid summers and mild, wet winters in the coastal plain; dry, comfortably warm summers and moderately cold winters, with rain and occasional light snow, in the hill regions; hot, dry summers and pleasant winters in the Jordan Valley; and year-round, semi-arid conditions, with warm to hot days and cool nights, in the south.

The total annual renewable water resources amount to some 60 billion cubic feet (1.7 billion m3), of which about 65 percent is used for irrigation and the balance for urban and industrial purposes. The country’s water sources consist of the Jordan River, Lake Kinneret (the Sea of Galilee), and a few small river systems. Natural springs and underground water tables, tapped in controlled quantities to prevent depletion and salination, are also utilized.

Since water is scarce in the region, intense efforts are made to maximize the use of what is available and to seek new prospective resources. In the 1960s, the country’s fresh water sources were joined in an integrated national grid, whose main artery, the National Water Carrier, brings water from the north and center of the country to the semi-arid south through a network of giant pipes, aqueducts, open canals, reservoirs, tunnels, dams and pumping stations. Ongoing projects for the utilization of new sources include cloud seeding, recycling sewage water and desalinating seawater.

The rich variety of Israel’s plant and animal life reflects its geographical location as well as its varied topography and climate. Over 500 kinds of birds, some 100 mammal and 90 reptile species, and nearly 3,000 plant types (150 of which are endemic to Israel) are found within its borders.

Israel has become an internationally known bird-watching center and a focal point of international research and cooperation.

Over 150 nature reserves and 65 national parks, encompassing nearly 400 square miles (about 1,000 sq. km), have been established throughout the country, with several hundred additional sites in the planning stage.

Rapid population growth and steady expansion of agriculture and industry have contributed to environmental deterioration, especially in the coastal area, where more than half of Israel’s population and most of its industry are concentrated. Plans and programs are in place to address pollution of the Mediterranean and Red Sea coastlines, groundwater pollution, water management, wastewater treatment, air quality, solid waste management, and hazardous substances. Enforcement of environmental legislation is a top priority alongside environmental education.

Economic tools are increasingly used to promote environmental improvement, both in the form of financial grants to industries that invest in pollution prevention and in the form of taxes and levies on polluters. In line with the principles of sustainable development, efforts are directed at resource conservation and the prevention of pollution in all economic sectors.

Israel is connected to the world’s major commercial, financial and academic data networks and is fully integrated into international communications systems by means of underwater fiber-optic lines and satellite link-ups. The country ranks high, on a per capita basis, in telephone lines, computers, and Internet users. Israel is one of the first countries worldwide to have 100 percent digitalization of its telephone network, which enables the provision of a range of state-of-the art services for subscribers. In addition, Israel has one of the world’s highest cellular phone penetration rates. Postal services operate throughout Israel and connect it with most countries abroad.

In a country of short distances, cars, buses, and trucks are the main means of transportation. In recent years, both rail freight and passenger usage has increased. In Jerusalem, a light-rail urban system is under construction. The ancient ports of Jaffa (Yafo), Caesarea and Acre (Akko) have been replaced by three modern deepwater harbors at Haifa, Ashdod, and Eilat, which serve international shipping. Ben-Gurion International Airport is Israel’s main and largest air terminal.