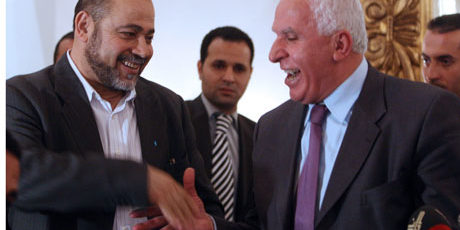 The rival Palestinian movements Fatah and Hamas initialed an agreement Wednesday to end a four-year rift that had left the Palestinians divided between separate governments in the West Bank and Gaza Strip, officials on both sides said.

The agreement negotiated secretly in Cairo provides for a transitional unity government, including both factions and other groups, that will prepare for elections to take place within a year, said Hanan Ashrawi, a member of the Executive Committee of the Palestine Liberation Organization. She said Mahmoud Abbas would remain in office as president of the Palestinian Authority.

The transitional government, to be made up of technocrats approved by both factions, would govern both the West Bank and Gaza Strip, Ashrawi said in a telephone interview.

“This is a very encouraging development and consistent with self-empowerment, democracy, nation building as well as peacemaking,” Ashrawi said. “The latest developments in the region have made it imperative for the Palestinians to work together and put an end to this debilitating rift.”

The agreement also provides for a joint committee to oversee the security services and asserts that the PLO will remain the overall framework for the Palestinian political leadership, said Kays Abu Laila, a member of the Palestinian legislative council from the West Bank.

Encouraged by anti-government protests across the Arab world, Palestinians have demonstrated in recent months in the West Bank and Gaza Strip, urging the leaderships of Fatah and Hamas to patch up their differences. The protesters said reconciliation was a required first step to end Israeli occupation of Palestinian lands.

Hamas seized power in the Gaza Strip in June 2007 after routing Fatah forces in a brief civil war. Fatah remains the dominant faction in the West Bank, where the Palestinian Authority governs.

“The Palestinian Authority has to choose between peace with Israel or peace with Hamas,” Netanyahu said. “Peace with both of them is impossible, because Hamas aspires to destroy the state of Israel and says so openly.”

Netanyahu added that “the very idea of reconciliation shows the weakness of the Palestinian Authority and leads one to wonder whether Hamas will take control of Judea and Samaria as it did in Gaza.” Judea and Samaria are the Biblical names of the West Bank.