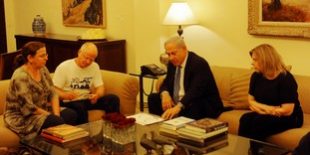 Prime Minister Binyamin Netanyahu on Sunday appointed David Meidan to replace Hagai Hadas in efforts to broker a deal with Hamas and gain the release of captive soldier Gilad Schalit, who has been held in Gaza for almost five years.

Netanyahu informed Schalit’s parents, Noam and Aviva, of the new appointment at a late-night meeting he held with them, accompanied by his wife, Sara, at his Jerusalem residence.

Meidan has held a senior position in the Mossad and has already been involved in efforts to secure Schalit’s release. He was chosen out of a number of candidates.

Before leaving his post, Hadas will work briefly with Meidan so that he can bring him up to speed.

Hadas announced last week that he was stepping down once his two-year term expired, a step he said he had always anticipated taking.

In a statement the prime minister released to the media after the meeting, Netanyahu said Israel was continuing to work behind the scenes to free the soldier.

Such activities will continue, Netanyahu said.

“I assure you that in the coming days and weeks, we will continue to operate by all the means that we have to bring about the release of Gilad,” he said.

Following the meeting, Noam Schalit said that the prime minister told him and his wife that efforts to free their son are ongoing, but without results.

He told Israel Radio that in the private meeting, which lasted over an hour, he and Aviva expressed their protest and frustration that two governments in five years have been unable to bring their son home.

Noting that the prime minister’s invitation suggested he would be provided with updates about developments in the efforts to return his son, Noam said: “Unfortunately, the only thing we heard about was the appointment of the new .”

President Shimon Peres will visit with the Schalits on Monday in a demonstration of solidarity and to assure them that the state is doing everything possible to bring home their son.

Peres will also spend time talking to the people who have been a constant source of support to the Schalits.

The Schalits have over time met with both Netanyahu and Peres, but the meetings were conducted in the offices or residences of the two leaders. Some government ministers have visited the Schalits and shared their concerns for Gilad’s safety.

Peres believes that it is particularly important for him to visit the Schalits just a few hours before the festival of freedom.

Aviva and Noam Schalit, as is their custom every Sunday, went to the Prime Minister’s Office accompanied by several supporters to demand that something be done to bring Gilad home.

Aviva Schalit, with the anguish of a fearful mother, held up a sign which read: “Netanyahu, you have no mandate to kill Gilad.”

In the early afternoon a small group of IDF reservists, representatives of the Forum for the Release of Gilad Schalit, showed up at Beit Hanassi with a letter protesting that no real efforts have been made to secure Gilad Schalit’s freedom.

A similar letter was forwarded to Netanyahu.

The reservists who came to Beit Hanassi got as far as the entrance where they were met by an aide to the president who accepted the letter and spoke to the group, telling them that Peres was utilizing every avenue he could to help the Schalits to be reunited with their son.