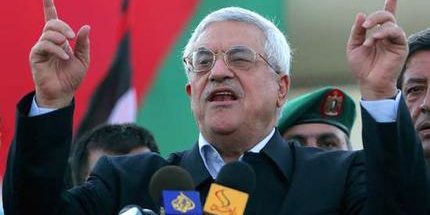 Israelis are growing anxious over the international community’s renewed rush to impose a peace settlement on Israel and the Palestinian Arabs. And the world’s impatience is being fueled by Palestinian threats to unilaterally declare statehood in September, even in the absence of a final status peace deal.

Palestinian leaders have publicly announced that they will declare independence in September and seek UN recognition of Palestine as a sovereign state.

“The admission of Palestine as a member t the United Nations has become an inevitable reality in September next,” Israeli Arab lawmaker Ahmed Tibi told Palestinian Authority reporters on Tuesday. Before he became an Israeli Knesset member, Tibi was an advisor to former Palestinian leader Yasser Arafat.

The UN itself on Tuesday suggested Tibi’s assessment is more than wishful thinking when it declared that the Palestinian Authority is capable and ready to function as an independent state, and is only being held back by the “Israeli occupation.”

At a donors meeting in Brussels a day later, the World Bank and International Monetary Fund, together with representatives of nations that regularly finance the Palestinian Authority, agreed with the UN.

“The PA is above the threshold for a functioning state in key sectors,” said the donor nations. They urged the Palestinians to achieve independence via a peace deal with Israel, but signalled they will not oppose a unilateral declaration of independence.

With that kind of backing, Israeli offocials estimate that even America won’t be able to prevent the birth of Palestine in the halls of the UN later this year.

“ Obama wants a Palestinian state and although the US is not interested in a unilateral declaration, it would be hard for it to stand alone in the General Assembly and vote against it,” an Israeli official told Israel’s Ynet news portal.

Another official noted that the US had blocked previous attempts to advance a unilateral Palestinian declaration of independence, but that it had only slowed down what has now become an unstoppable trend.

Meanwhile, the Palestinians see all of this and know they can now play hardball and stick to even their most outrageous demands. Compromise is off the table as far, as they are concerned.

“The administration has started to realize the situation in the Mideast is dangerous,” Palestinian spokesman Nabil Abu Rudeinah told Reuters. “It’s time for the American administration to move before September.”

US Secretary of State Hillary Clinton said her government is already on the job, and that Obama can be expected to launch a new peace initiative in the coming weeks.

Obama’s previous high-profile efforts to jump-start the Middle East peace process were foiled by the Palestinians’ refusal to negotiate with Israel.

At the same time, Israeli Prime Minister Benjamin Netanyahu is reportedly working on his own peace proposal, but it is expected to be rejected by the international community if it veers from established Arab demands.