PM on Beersheba attack: 'No one should test our resolve' 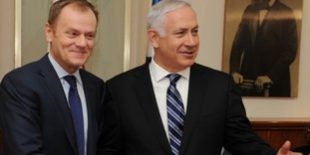 Prime Minister Binyamin Netanyahu on Thursday commented on the firing of a Grad rocket on Beersheba late Wednesday, saying, “I do not recommend that anyone test Israel’s determination. We will not tolerate anyone bombing us. This is something that no country in the world would agree to and we will act accordingly.”

One rocket landed in the yard of a home, causing extensive damage. No injuries were reported but five people were treated for shock.

Netanyahu made the comments at a meeting with Polish Prime Minister Donald Tusk, who said, “We are against any acts of silence and are not prepared to be allow anyone to deny the existence of Israel. Poland will not let these things happen.

Speaking on Iran, the Polish prime minister said that, “We cannot pretend that Iran’s behavior is normal and that a terrorist is a freedom fighter.”

He told Netanyahu that “You have a real friend in Europe and it is important that both country’s will strengthen each other’s image.”

Earlier, at the start of the Israeli-Polish ministerial meeting, Netanyahu said: “We will have a second, productive meeting between the Israeli and Polish governments. We are promoting, with tangible actions, our deep bilateral cooperation, which is based on common values and a shared history, as well as on the aspiration to a common future in which we want to achieve the same goals,” according to an official statement.

“Therefore, I view this as having practical and symbolic importance and I welcome the cooperation between us,” Netanyahu added.