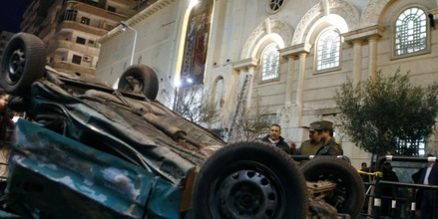 The morning bells of All Saints Church beckon worshippers a little later these days, and Mass is celebrated more frequently.

The schedule shift for the early service has come in response to the government-imposed overnight curfew. The extra services? Coptic Christians in Egypt’s second-largest city say they have a lot of reasons to pray amid the nation’s turmoil.

But in a surprise even to them, many Copts say they now find themselves praying for President Hosni Mubarak’s government to last as long as possible.

It’s not that the Copts — who make up about 10 percent of Egypt’s population of more than 80 million — see the autocratic three-decade president as a great friend. Far from it, they say. As recently as last month, Christian youths in this coastal city protested what they called the government’s failure to root out growing harassment, which culminated in a New Year’s Day bombing that killed 24 worshippers outside All Saints.

Weeks before anti-Mubarak demonstrators in Cairo began their occupation of Tahrir Square, Copt protesters in Alexandria were choking on tear gas as they faced down government police.

But now, many say they’re rethinking their opposition to Mubarak’s government, fearing its collapse might spur an anti-Christian backlash if the Muslim Brotherhood or other Islamist groups gain a foothold.

“He’s the best of the worst,” said Sameh Joseph, a church worker at the Patriarch of the Orthodox Christians Church in Alexandria. “Whoever comes after him might want to destroy us.”

So when more than 100,000 anti-government protesters took to the streets here Tuesday, most Copts steered clear.

“Everyone is scared about what is happening,” said Samya Hammoui, who lost two sisters and two nieces in the Jan. 1 bombing. Government officials blamed the attack on a Palestinian terrorist cell from the Gaza Strip.

“If one of the Islamic extremists took over, things for us would be much worse,” she said.

In contrast to their criticism of Mubarak after the bombing, Christian leaders in Egypt have more recently been emphasizing the need to maintain order.

Coptic Pope Shenouda III said on government-run television that Egyptians should “safeguard the security and stability of the country.”

The government began beefing up security around churches after the bombing, but when the pro-Mubarak police walked off the job last week, church officials scrambled to fill the void.

At All Saints, guards check worshippers at the door and an ambulance stands ready in the courtyard, parked under a poster of Jesus.

There have been no reports of attacks on Copts in Alexandria since the anti-government protests began, though, after the Jan. 1 bombing, Christians and Muslims clashed briefly on the streets.

The unrest may actually be working to bring the two sides together, officials of the church said, at least in the short term.

Outside the Patriarch church near the city center, a mostly Muslim vigilante squad is standing guard at night. Similar teams are set up at churches around the city.

“Muslims and Christians are brothers,” said Mohamed Elnokary, 40, holding a wooden club as he inspected cars this week at a checkpoint outside Patriarch. “No one is going to divide us.”

Working by his side was Mina Fakhry, 25, a Coptic Christian who owns a nearby clothing shop. The two men say they’ve had no problems working together, despite the fact that they disagree fervently about whether Mubarak should quit.

Elnokary wants to see the president leave, blaming him for the country’s economic stagnation. Fakhry shrugged and said: “I guess he’s not so bad. He could stay.”

Several Copts acknowledged that their newfound appreciation for Mubarak was based largely on their confidence in his ability to maintain order and keep Islamist extremists at bay.

Nevertheless, Copts have faulted the government for failing to stop a string of attacks over the last year, which also included a Christmas Eve drive-by shooting that killed six of them. A bishop has also been threatened, and Christians have been publicly derided for allegedly holding converts to Islam “hostage.” They’ve also been blamed for bringing swine flu to Egypt.

“All this kept happening and the president did nothing,” said Mena Grace, 22, an engineer in Alexandria. Grace, a Copt, recalled how members of one extremist group defaced a picture of the Coptic pope by stepping all over it in public.

“Now Egyptians are doing the same thing with Mubarak’s picture,” Grace said. “It’s like G0d is getting even with him.”

Does he want Mubarak to leave?