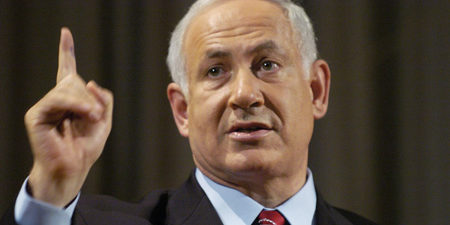 Have the lessons of the Holocaust been learned?

Today, 66 years after the horror, we are here, in Jerusalem, the eternal capital of our nation.  We, the representatives of the Jewish nation, are holding a special ceremony to mark the International Holocaust Remembrance Day.

The lesson that we have learned, first of all, is that we are here, in our sovereign country, in our capital city.

We have learned another important lesson, probably the most crucial lesson to be learned from the atrocity, from the chain of atrocities that brought about one much worse; this has continued for hundreds and thousands of years, since we lost our country and our sovereignty, and since we lost our capability to defend ourselves.  The lesson learned was that we had to restore the capacity of the State and the army for self-defense.

This lesson was understood by Herzl even before the great atrocity took place.  He foresaw it, and we implemented it.

But there is one other lesson. At the end of the Holocaust, there were 11 million Jews in the world.  Before it, there were 18 million.

Even at a very slow rate of natural increase of the population, there should have been almost 30 million Jews in the world, but in fact, there are only 13.5 million; much less, half of what there should be.  This did not happen by physical loss; it happened because of assimilation and the loss of identity.

The only place where the Jewish people has grown is here, in Eretz Yisrael, in the State of Israel.  We have continuous substantial and blessed growth.  There is no nation that could live on a demographic pin head.  Therefore, while cultivating our country, we must continue to encourage aliyah, bringing Jewish people to Israel, and to prevent their assimilation abroad.  All the projects that we operate – Birthright, Masa and also Moreshet – are aimed at our young adults and also young Jews abroad. They are essential elements in assuring our future.

Have we learned the lesson?  The answer is yes.  Has the world learned the lesson?  Well, I think one thing is clear: the fact that global anti-Semitism is renewing and expanding is obvious.  If anyone thought that Anti-Semitism stopped after World War II and the Holocaust, it is now evident that it was only a hiatus.  The same forces that you mentioned joining together, share a new/old anti-Semitism with the world, and so we must fight it, globally too.  For that, I congratulate my friend Silvan Shalom, who, when serving as Foreign Minister, brought about an important United Nations resolution – marking this day, a resolution which was adopted by the UN.

This resolution is indeed implemented in many countries, which is an important achievement and in many ways also unique, at least in the ability to propose an Israeli draft resolution to this organization, which I am well familiar with, I spent a long time there.  It was a milestone.  But I still ask: does the world that condemns that anti-Semitism also condemn this anti-Semitism?

Every now and then, very feebly – it isn’t just anti-Semitism; it is the regime – a member country of the UN, the regime of ayatollahs – stands up and knowingly and openly calls for the annihilation of at least another six million Jews, without even a hint of pretense.  And nobody says a thing.  Well, that’s not exact. Here and there a comment might be heard, but where is the anger, the outrage?  Where is the outcry?  Where is the “J’accuse?”  I’m not asking about us.  We are here; we’ve learned our lessons.  But where is the global uproar that should have risen from advanced communities around the world in response to explicit declarations of genocide, of exterminating a people, that same people!

We must be honest with each other.  Diplomacy is, first and foremost, identifying the situation as it is.  If we want to change it, we must understand it.  And we have a very disturbing historical phenomenon.  I don’t think that it is only hard for us, but for all civilized people, all civilized peoples, who allow such an affliction, such statements, such savagery, barbarism and primitivism to be uttered and spread.  It is said; it spreads, becomes acceptable, commonplace, and always prepares the ground for the next action and also prevents those actions that will not take place.

I am aware that there are many leaders and good-hearted, conscientious people around the world.  I know that they think what I think.  I know that in their hearts, they tell themselves what I am saying today from this podium.

However, that will not suffice.  Because in the face of this regime, that calls for our annihilation, and arms itself with weapons of mass destruction in order to fulfill its nefarious intentions, there should be a much stronger protest.  This makes me somewhat disheartened, my friend Silvan.

I was in that institution, I served in it as the representative of Israel.  One day I heard that there were rumors about a file about Waldheim, who was then President of Austria. It might have been the Secretary-General of the UN. The Secretary-General said he had a profile about a war criminal in some UN archive.

What was this archive? It turned out that there was a war-criminal archive instituted by Churchill and the Allies during the war to collect material against Nazi criminals and their collaborators.  They gathered the information, and listened and discussed and prepared the files and at the end of the war they took these files, brought them to the UN, and locked them in the basement, where they just lay for decades.

I asked if I could go in there, and they said “no.”  I asked why, and was told that I needed the consent of all the allied countries, 18 or 19 countries, I think, and there was no such approval.  Well, it took me a year until I got the okay and was taken to the archive.

It wasn’t exactly in the basement, it was on the first floor of a UN building somewhere in New York. I walk in and see boxes upon boxes; I go to ‘W,’ pull out the box: Waldheim, Kurt, and various notes.  My hair stood on end (I had more hair then). Horrible things, lying there, hidden for dozens of years.  I look at the next file (I didn’t start taking boxes out, it was the same box): Birkenau 1944, records of exterminations, the death marches, trains, the S.S., it’s all documented.  1944, but I think I also saw files that referred to 1943.

My friends, these 18 countries, perhaps the best statesmen in history, distinguished men, truly great men – they knew.  They knew in real time, and not from this particular testimony that I have just mentioned.  There are plenty of testimonies: terrible things that are very hard to read.  They knew, but they did not act.

Why did they not act? Because they were busy fighting the major battle against the Nazis, which was their main concern.  But how hard would it have been to bomb the railway tracks leading to the death camps?  When you go there, and many of you have been there – I was there with some of you, several times – you see they could have bombed the camps. They were already bombing that awful chemical plant only seconds away.  They would only have needed to tilt the plane a bit and could also have bombed the ramp and two incinerators, and the tracks.  It wouldn’t have made the slightest difference to their war effort.  They knew and they did nothing.

The Iranians say that it’s against the Zionists, anti-Zionism.  It was Martin Luther King who burst that bubble better than anyone else.  He said, and I quote: “When people criticize Zionists, they mean Jews. You’re talking anti-Semintism!”

Martin Luther King.  That’s right.  So that’s what the Iranians say.  But this is the truth.  It is not only a threat against us, because it always begins with the Jews but never ends with the Jews.  The hatred of Jews kindles an overall fire, and I expect that on this day, when I applaud the world for marking the most heinous crime in world history and the history of our people which was perpetrated against our people – I hope others will also learn the lesson.  We already have.

I expect the world to learn the lesson and start fighting in words and in deeds against the new anti-Semitism.  That is what I expect and I am certain, my friends, that you expect the same.