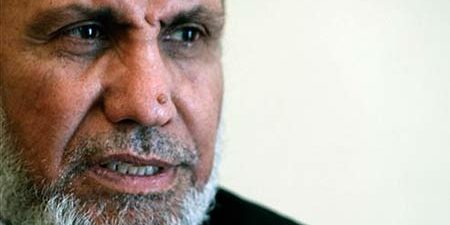 A senior Hamas leader on Thursday accused Israel of carrying out “countless holocausts” against the Palestinians while saying the Nazi genocide was a “lie.”

Mahmoud al-Zahar made the remarks during a memorial ceremony for 43 Palestinians who were killed at a UN school in the Jabaliya refugee camp during Israel’s 22-day war on Gaza that began in December 2008.

Zahar was speaking on the second anniversary of an Israeli air strike on the United Nations’ Al-Fakhura school in the northern Gaza Strip. The incident was one of the deadliest in Israel’s Operation Cast Lead offensive, which left 1,400 Palestinians dead, along with 13 Israelis, 10 of them soldiers.

Before an audience that included members of the Hamas leadership in Gaza, Zahar paid tribute to those who died in the school where they had taken refuge from the heavy fighting. “The blood that was shed in Al-Fakhura and in every inch of Palestine will not be in vain,” he said. Cast Lead, which Israel said it launched in response to rocket fire from the Gaza Strip, ended in a ceasefire on January 18, 2009.

Israel was established in 1948 in the wake of World War II when six million Jews were killed during the Nazi Holocaust.