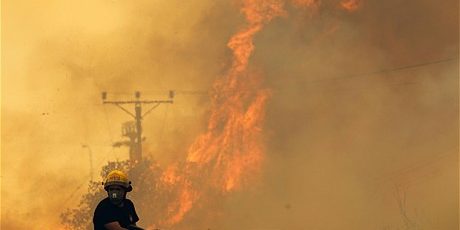 Ceremonies marking the departure of some of the international fire fighting teams that arrived to help Israel fight the Carmel forest fire were held throughout the day (Monday) in the Israel Air Force bases Nevatim and Ramat David. Similar events are scheduled tomorrow in the Haifa and Tel Nof IAF bases.

Nearly 200 foreign crewmen received IAF medals in appreciation of their services, and all the delegations received a special honorary greeting from IAF Commander Maj.-Gen. Ido Nechushtan, stating, “You have earned this honor for putting out the deadly fire in the Carmel. You have shown responsibility, determination, camaraderie and courage”.

The Commander of the Ramat David base declared, “The cooperation was excellent, reaching across barriers of language and culture. You were all focused on the mission of saving lives and saving the Carmel landscape.”

The Commander of the Nevatim IAF base said, “Real friends are those who are friends in need. Israel was met by a disaster, but you were there to prove your true friendship. We felt this throughout the days that we fought the blaze. I, the IAF and the State of Israel wish to thank you and honor you.”

Dozens of firefighting airplanes and helicopters, as well as supply planes carrying equipment, professional teams and experts from different countries arrived between Thursday night and Sunday to assist in fighting the Carmel fires. The IAF organized an emergency operations center to coordinate and utilize all Israeli and foreign aerial support for fighting the fire. Many IAF support teams were dispatched to assist the firefighting teams in the disaster area.

The first planes to arrive, overnight between Thursday and Friday, were a Bulgarian Airbus carrying Bulgarian firefighters and a Greek C130. On Friday, the following aircraft arrived:

· One THRUST550 airplane and one B412 helicopter from Greece

· One IL76 plane from Russia

The following arrived on Saturday:

In addition, the American Supertanker arrived on Sunday, as did aircraft from Switzerland, Russia, the Netherlands, France, Azerbaijan and Romania.