Liberal Myopia and the Reality of Islam 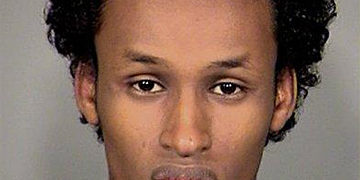 Portland, Oregon, dodged the bullet last week when a Somali born American was arrested for planning to commit a horrendous atrocity during a Christmas tree lighting ceremony in Portland’s Pioneer Square.

Thousands of people attending the ceremony would have been slaughtered and maimed if the FBI had not replaced the enormous quantity of explosives inside a parked van with fake ordnance.

But it was the grotesquely liberal Portland city council itself that five years ago made Portland the sole city in America refusing to be part of the FBI Terrorism Task Force, which works with local police. In so doing, the chickens came home to roost in the person of Mohamed Osman Mohamud, a Somali who had come to America at the age of five with his family as a refugee from the hell that is Somalia.

Mohamud grew up as an American Muslim, was educated in the greater Portland area and given a wonderful new life in the United States. In return, he showed his gratitude by embracing violent jihad and by attempting to kill as many Americans as possible – specifically at a Christian celebration.

As a result of the refusal by Portland to be part of the FBI Terrorism Task Force, the present mayor, Sam Adams, admitted that he did not know anything about the FBI investigation. Now the failed attack has city officials wondering whether or not to now rejoin the task force.

Portland is served by one of the most liberal newspapers in America: The Oregonian. In its front page story in the Wednesday, December 1st, 2010 edition, Nancy Haught wrote an article titled: “Muslims respond to criticism of Islam stirred up by Portland bomb plot,” in which local Muslim leaders responded to charges that Islam is not a peaceful religion.

Ms. Haught herself wrote that: “After all, the word “Islam” shares a root with the Hebrew word “shalom” and means — no matter what you hear or read — “peace attained by submission to God.”

This is patently untrue. Islam means submission, not peace. And it refers to submission to the will of Allah. The word shares a root with the Arabic for peace, which is ‘salaam.’ However dictionaries show no similar meaning. She then quotes from a professor of Islam at Portland’s extremely liberal Reed College, Prof. Kambiz Ghanea Bassiri, who states that, “There’s no part of the Quran that says killing people is okay.”

He went on to say that, “The Quran gives permission to fight to those who have been wronged or persecuted, to those who have been driven unjustly from their homes.” It allows killing – if it is justified –and imposes limits. In fact, the Quran instructs Muslims to live peacefully as long as their enemies are “inclined” to peace. And the prophetic tradition of Islam forbids killing innocents – women, children or any living thing.”

Nancy Haught may be persuaded, but empirical facts from the Koran and Hadith tell a very different story. Here are just a few Koranic injunctions to the Muslim faithful:

Ms. Haught then interviewed Wajdi Said, President and Co-Founder of the Muslim Educational Trust. According to Nancy Haught, Mr. Said told her, “There is no verse in the Quran that condones fighting any peaceful non-Muslim on the sole ground that he or she is a non-Muslim. If that were true,” he added, “what would explain the fact that religious minorities through 1,400 years of Muslim history not only survived, but also thrived and found freedom to practice their faiths under Muslim rule?”

“Christians in Arab countries are no longer being persecuted; they are now being slaughtered and driven out of their homes and lands.

“The war of genocide against Christians in the Middle East can no longer be treated as an “internal affair” of Iraq or Egypt or the Palestinians. What the West needs to understand is that radical Islam has declared jihad not only against Jews, but also against Christians. In Iraq, Egypt and the Palestinian territories, Christians are being targeted almost on a daily basis by Muslim fundamentalists and secular dictators.

“Dozens of Arab Christians in Iraq have been killed in recent months in what seems to be a well-planned campaign to drive them out of the country. Many Christian families have already begun fleeing Iraq out of fear for their lives.

“In Egypt, the plight of the Coptic Christian minority appears to be worsening. Just this week, the Egyptian security forces killed a Coptic Christian man and wounded scores of others who were protesting against the government’s intention to demolish a Christian-owned structure.

“Hardly a day passes without reports of violence against members of the Coptic Christian community in various parts of Egypt. Most of the attacks are carried out by Muslim fundamentalists.

“In the Hamas-controlled Gaza Strip, the tiny Christian community is also living in fear following a spate of attacks by radical Islamic groups.

“When Muslim fanatics cannot kill Christian soldiers or civilians in the mountains of Afghanistan or on the streets of New York, they choose an easy prey: their Arab Christian neighbors.”

Sadly, many who read The Oregonian are unaware of the facts about Islam and its history and are thus swayed by what appears in its pages, especially when an article such as that written by Nancy Haught appears on the front page.

But there is a tiny number of brave Muslim scholars who point to Koranic passages, which the likes of Osama bin Laden would look upon as inconvenient truths.

One such is Tawfik Hamid, an Islamic thinker and reformer who, according to his Bio, was a one-time Islamic extremist from Egypt and member of a terrorist Islamic organization with Dr. Ayman Al-Zawahari who became later on the second in command of Al-Qaeda.

Some twenty-five years ago, Dr. Hamid recognized the threat of radical Islam and the need for a reformation based upon modern peaceful interpretations of classical Islamic core texts. Tawfik Hamid says that the time has come to denounce the following Islamic concepts, which he presents as the letters A to G:

Apostates killing; Beating women and stoning them to death for adultery; Calling Jews pigs and monkeys; Declaring war on non-Muslims to spread Islam after offering non-Muslims three options – subjugate to Islam, pay Jizia (a humiliating tax), or be killed; Enslavement of Other Human Beings; Fighting and killing Jews before the “End of Days; Gay Discrimination and Hostility.

He states in an Op-Ed that,

“Unbiased observation of the Islamism phenomenon reveals beyond doubt that barbaric acts and discrimination against non-Muslim minorities are repeatedly practiced and conducted in the name of Islam.

“Preventing Christians in Saudi Arabia from having churches or even carrying Bibles, the recent attacks on Christian churches in Iraq and the possible hanging of a Pakistani Christian mother of five for criticizing the prophet Mohamed are just a few examples of many that exemplifies the inhumane discrimination that is currently practiced against innocent non-Muslim minorities in several parts of the Muslim world.”

Such words coming from an eminent Islamic scholar give the lie to the less than truthful statement of Mr. Wajdi Said as quoted by Ms. Haught on the front page of The Oregonian newspaper. Doctor Hamid went on to state that:

“Unfortunately, many Islamists use Islamic religious text to justify such injustice and hate-based barbarism against the non-Muslim minorities. It is shocking to see the leading scholars and organizations of the Muslim world – who want Islam to be called the religion of peace – not standing strongly against such unacceptable acts.”

The Muslims that Nancy Haught chose to represent Islam revealed their unwillingness to quote from Koranic passages that he believes just might be the foundation for a long overdue reform of Islam itself. Dr. Tawfik Hamad quotes the following passages:

Koran 22:40 indicates that destroying the holy places of non-Islamic religions to be a major crime. And in Koran 2:190 attacking innocents for being non-Muslim is clearly forbidden.

Dr. Hamid adds in his Op-Ed that, “it is vital that the Muslim world start distinguishing between the historical violent and discriminatory practices of the Islamic Caliphate and the Koran as a source for the religion.”

In other words, Dr. Hamid believes that the practices of the Caliphate have come to supersede in many instances the Koranic verses. This may be so to a certain extent, but the verses themselves are what they are and, according to most interpreters of Islam, are inviolable and thus cannot ever be changed.Indeed as Turkish Prime Minister Tayepp Erdogan, the close friend of Iran’s genocidal president, Ahmadinejad, said with regard to what someone called ‘moderate’ Islam:

“These descriptions are very ugly, it is offensive and an insult to our religion. There is no moderate or immoderate Islam. Islam is Islam and that’s it.”

Certainly, attempting to constantly give, as liberals do, a free pass to Islamic abuses; to play down its violent ambitions of world conquest; to ignore the evident threat to Judeo-Christian civilization from Sharia law and to write such mush as seen in The Oregonian merely encourages the violent tendencies of the followers of what many now call: an ideology wrapped in a religion.

Contributing Editor Victor Sharpe is a freelance writer, contributing editor, and author of Volumes One and Two of “Politicide: The attempted murder of the Jewish state.”