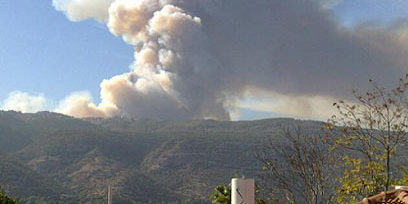 Firefighters battled a large blaze Thursday in the Carmel Forest near Haifa, which left dozens dead and brought life to a halt for many communities. The 40 people killed on the bus, making their way to Damon Prison, were cadets in the Prison Service officers’ course.

Prison guards who came to the rescue of the prisoners paid with their lives: 40 Prison Service cadets were making their way to Damon Prison were burned alive. MDA set up a first aid mobile unit but began its evacuation since no injured were left on scene.

Magen David Adom said a bus carrying some 50 jailers which left the Damon Prison caught fire. It was further reported that 40 prison guards were killed. MDA reported that three others were severely wounded, another lightly injured and two more people’s condition is unknown. MDA confirmed the death of 22 out of the 40 people.

Some of the injured men and women were members of the rescue forces and firefighters who risked their lives fighting the flames. Four IDF helicopters and one Air Force helicopter arrived at the scene to assist with evacuation. The fire continues to burn in the Carmel area, including inside kibbutz Beit Oren.

A couple of hours after the burning prison bus fire was finally put out, tiny flames were still incinerating the sooty vehicle. More than ten scorched bodies surrounded the bus, and private cars of police officers who arrived at the scene and were caught in the flames were on the road nearby. ZAKA officials, police officers and friends of the deceased were walking around in utter shock.

Three hospitals in Haifa, Rambam, Carmel and Bnei Zion are on high alert. Dozens of beds have been placed at emergency rooms in the city. Doctors, nurses and assistants have been called from their homes. Relatives of the injured have arrived at the hospitals and the police are on scene directing traffic, allowing only emergency crews to enter in the area.

Carmel Hospital official said: “Four injured people arrived here. One of them, a female who was in the burning bus, is in critical condition. Three more lightly injured suffering from smoke inhalation arrived here as well.”

Police forces, firefighter and ambulances are in the area, as well as Prison Service officials who arrived at a kibbutz in the Carmel. Fire Commissioner Shimon Romach said that a number of firefighters have been wounded in the fire: “The flames are going wild in certain locations, and we are trying to control them. There are wounded, a few of our people as well. We can’t predict when this story will end, it could take many hours.”

The IDF has given the police access to dozens of medical teams, including IDF paramedics and doctors, medical equipment, helicopters, water tanks and a couple of battalions. Hundreds of soldiers from a nearby command base are currently trying to help put out the fire and evacuate the injured.

Prime Minister Benjamin Netanyahu described the fire as a “catastrophe the likes of which we have never known. We will have to draw many lessons in order to deal with catastrophes of this kind but right now, everything must be about saving lives.”

The prime minister praised the firefighters’ work and said they were handling the fire with courage and dedication. He then travelled to the site of the fire.

It was also reported that the prime minister spoke to the leaders of Russia, Italy, Greece and Cyprus and appealed to them for assistance in extinguishing the fire by asking them to send fire extinguishing planes.

President Shimon Peres also commented and said: “Our hearts are with the firefighters who fight with amazing courage. Some of them were also injured.” He further added: “We pray for a miracle, for their wellbeing, and for an end to the fire.”

The fire spread quickly due to easterly winds and quickly overtook dozens of square kilometers of forest, cutting off power to much of the area and dousing Haifa with smoke.

One of the Prison Service officers who was present at the Carmel region when the fire broke out collapsed in the arms of his friends after visiting the site. “It’s worse than a terrorist attack in Gaza,” he said. “They just laid there on the floor, dozens of people, and there was nothing to do.”

One of the firefighters at the scene related: “We saw the bus catch fire. Dozens of victims were burned, it was very very shocking and it all happened because there was no control of the fire.”

A police source told Ynet that detectives were probing a lead saying an illegal dumping ground caused the large blaze in the Carmel forest.

Haifa Mayor Yona Yahav visited the site and said authorities had known of the illegal activity for some time. “It was just a matter of time until a calamity occurred,” he said.

Firefighters ordered police to evacuate Damon Prison, located near the Druze town of Usfiya, as well as the town of Beit Oren. Other towns and hotels in the area are on alert.

Prisoners were to be taken to other prisons nearby, and residents will be evacuated to a community center, the regional council said.

Roads were also cut off, and authorities warned Haifa University to be prepared for evacuation if it became necessary.

The blaze broke out around 11 am, and 15 firefighting teams were said to battling it “The wind is confusing the firefighters and making it very difficult for them,” Reshef Hezi Levy, their spokesman, told Ynet.