A Mess of Pottage 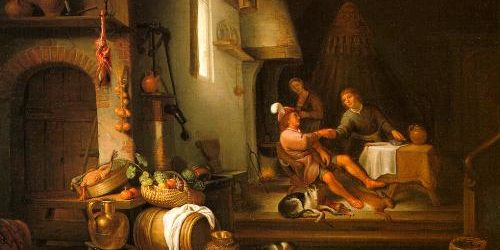 “Then Jacob gave Esau bread and pottage of lentils; and he did eat and drink, and rose up, and went his way: thus Esau despised his birthright.” — Genesis 25:34

One can’t help but think of the Biblical story of Esau and the way he cavalierly dispensed with his birthright after the slew of reports regarding Prime Minister Benjamin Netanyahu’s recent decision to support an extension of the settlement ‘freeze’ for another 90 days “in exchange for a package of incentives from Washington.”

Instead of lentil soup, it’s a “honey trap”, to quote Strategic Affairs Minister Moshe Ya’alon, one “that will plunge us into another crisis with the Americans in the future, in three months or maybe even before then.” The honey, in this case, consists of 20 U.S. stealth fighters, $3 billion in military hardware and a promise from the U.S. to veto anti-Israel resolutions brought to the UN Security Council.

By working out this latest deal with the U.S., Netanyahu has undermined whatever credibility he had left, both internally and elsewhere. He has shown his commitments are meaningless. He commits and then un-commits. He sets conditions and then removes those conditions. What sort of leadership is this?

“Don’t worry,” he told his supporters, the 10-month construction freeze is “one-time only.” Then, when Obama floated the idea of an extension freeze to lure Palestine Authority President Mahmoud Abbas back to the negotiating table, Netanyahu back-pedaled. He hinted he might agree to an extension provided the Palestine Authority recognized Israel as a Jewish state. When the PA said ‘nothing doing’, Netanyahu back-pedaled some more, agreeing instead for the current mess of pottage – jet fighters, military hardware and other goodies. Now, the prime minister has the chutzpah to say this 90-day freeze is ‘one-time only’ – as in a ‘one-time only’ extension of a ‘one-time only’ freeze.

The prime minister should set up a Ministry for Vocabulary with a Cabinet-level secretary on hand to tell him what words and phrases like ‘one-time only’ actually mean.

Shmuel had little respect for Netanyahu, whom he compared not to Esau, but to British Prime Minister Neville Chamberlain. Seven-and-a-half months into Netanyahu’s first term as prime minister, Shmuel had seen enough. In “A Very Pernicious Process” (The Jerusalem Post, January 27, 1997), he wrote:

Neville Chamberlain, Baldwin’s successor as conservative leader, led Britain into the appeasement of Hitler, into Munich, and into World War II. And so Binyamin Netanyahu in 1996 won an election he would surely have lost had he told the people what he was going to do as prime minister.

Netanyahu had by 2000 sunk still lower in Shmuel’s estimation. In a Letter-to-the-Editor, “…And Netanyahu’s Candidacy”, (The Jerusalem Post, December 22, 2000), as Netanyahu considered running for election against then-PM Ehud Barak, Shmuel wrote:

If Netanyahu succeeds in securing a contest with Barak for the premiership, the nation will have the dubious option of choosing between Tweedledee (forced to end his earlier term by his blunders, breach of promises, and his dismissive, not to say insolent behavior toward his colleagues and followers) and Tweedledum (ditto). Netanyahu out of office, however, managed to add to his achievements.

He abandoned his distressed and debt-ridden party after its defeat, leaving it to others to pick up the pieces, while he developed his private business concerns. Now, the moment the signs show that – owing to Barak’s failures – the prospects for the Likud’s return to power are bright, here he is, pushing himself to the front, unceremoniously shouldering aside his party’s leader to announce that he will run for prime minister, and correct all the mistakes of Barak.

It will be shocking to some to learn that Shmuel voted for Ehud Barak in the preceding 1999 election – his personal vote of no-confidence in Netanyahu. We will leave it to the reader’s judgment to decide if that was a good idea – Shmuel no doubt felt it didn’t matter when the choice was between Tweedledee and Tweedledum. (It seems that Shmuel was right as both now have joined forces in the same government.)

The collapse of Netanyahu’s first premiership in 1999 came about when right-wing members of his coalition became disenchanted with his leadership. Netanyahu had been voted in with a mandate to stop the Oslo Accords. As Shmuel writes in “A Very Pernicious Process”:

The majority that voted Netanyahu into power was moved by the deep-seated belief that the “peace process” was a transparent confidence trick, a process which, if consummated, would lead to an Arab-Israeli war, with Israel reduced to a state of utmost vulnerability….

They believed that the conflict with the Arabs was not over border modifications but over possession of the Land of Israel; that surrenders of territory not only weakened Israel strategically but increased the Arabs’ confidence that, this time, they would win the war they were planning….

No less strong was a widely shared sense of the need to overcome the defeatism that had become a hallmark of Israeli government policy; and of the need to stem the grinding down of the moral fiber of a segment of the Jewish population.

To the dismay of these supporters, Netanyahu didn’t call a halt, in Shmuel’s words, to “what some joker named the ‘peace process’”, but rather continued it, signing deals with the PLO like the Wye River Memorandum. The subsequent political fall-out, given that Netanyahu has run on a platform of no further territorial concessions, led to a no-confidence motion and the disintegration of his government.

Will history repeat itself? With this latest deal to extend the freeze, Netanyahu has split his cabinet and sparked calls for his ouster from right-wing leaders. According to Ha’aretz, Netanyahu had expressed fears even back in July that any freeze extension would topple his government.

If his government does fall, Netanyahu will only have himself to blame. Like Esau, he made his choice, and like Esau, he will exit ignominiously from our history.