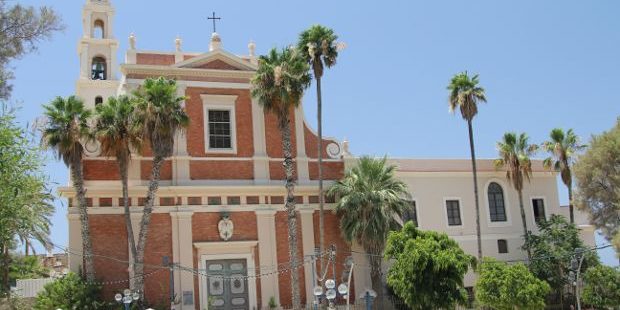 When new immigrants (olim) arrive to Israel, the first step in the absorption process is attending ulpan—an intensive Hebrew language course for adults. It is an Israeli right of passage. When I moved to Beer Sheva in 2000 on a student visa, I electively enrolled in an ulpan at the local Mercaz Klita (absorption center). In a class of twenty-one students there were eighteen from the former Soviet Union states, two from Venezuela, and myself. Everyone except me had immigrated to Israel as a Jewish citizen.

For a field trip the class visited the old port city of Jaffa, just south of Tel Aviv. After an organized tour and Hebrew lesson we broke off on our own to sightsee. I wandered over to the beautiful Franciscan St. Peter’s Church where, much to my surprise, three of my Russian-speaking classmates were already kneeling in prayer and making the sign of the cross. When they noticed my wide eyes, they gave me an amused shrug as if to say “this is no secret.” These classmates were my gateway into the complex world of Israel’s Russian-speaking Christians. But they were by no means my last.

Israel has seen several waves of Russian immigration as Jews, under the Soviet Union, were cut off from Jewish learning and were regularly subjected to state-sponsored anti-Semitism. Zionists were accused of treason and denied the right to relocate to Israel. In 1970, a window opened as the Soviet Union briefly bowed to international pressure, lifting their tight quotas on exit visas. Jews clamored to get out, thousands moving to Israel, before the window closed again. The floodgates opened completely, however, with the collapse of the Soviet Union. From 1989 to 1993, 800,000 immigrants came to Israel—the largest aliya movement since the creation of the modern Jewish state. (Aliya, literally meaning “going up,” is the Hebrew word for immigrating to Israel.)

In 2008, there are 1.3 million Russian speakers in Israel, out of a total population of 6.5 million. As it stands, more Jews have immigrated to Israel from the former Soviet Union than from any other country in the world. A significant portion of these olim—as many as 500,000—are not considered Jewish according to orthodox laws (halacha) and are ignorant of Jewish tradition. In my ulpan class this was exemplified by the stunned silence when our teacher asked about the holiday of Passover.

The exact number of Christian olim is complicated because many maintain a low religious profile. According to the Israeli Bureau of Statistics, 23,000 Russian-speaking immigrants are self-classified as Christian. Thousands of others, who are probably Christian, declare their religion as “unclassified” or “other.”   The unofficial count of Christian Russian immigrants is around 80,000.

The Law of Return in Israel states that any Jew can become a citizen of Israel. Under the “grandchild clause” in the Law of Return, anyone with a Jewish grandparent also qualifies for aliya. The idea is that since the Nazis targeted someone who was one-quarter Jewish for extermination, he or she should be granted protection by the Jewish state. In accordance with this clause and its extension to non-Jewish family members, Israel’s Ministry of Interior says that 15% of all Russian immigrants during the 1990s came as non-Jews. In recent years this percentage has risen to 58%.

Restricting the Law of Return to curb non-Jewish immigration is a controversial topic in Israel. Orthodox proponents, like the political party Shas, believe it is time to cancel the “grandchild clause.” They worry that Israel will lose its Jewish identity if it does not stop the entry of immigrants who are not Jewish by halacha. Opponents to any change in the Law of Return argue that it is the foundational principle of the state and that the law should not cater to the Orthodox. Plus on a practical level immigration helps tilt the demographics of the region in Israel’s favor.

The Israeli authorities hope most of the immigrants who are not halachically Jewish assimilate into the Jewish majority or participate in one of the several conversion programs for olim. Shuvu is the nationwide school system with an enriched Jewish curriculum that teaches young immigrants Jewish traditions. The IDF has its own “friendly” conversion process for Russian-speaking soldiers. They offer courses in Judaism and Zionism and have seen over a 15% conversion rate among immigrant soldiers. Outside the military, however, the conversion process is much more restrictive with only half of one percent of immigrants converting each year.

Immigrants from the former Soviet Union—be they Christian or secular—have in a short period dramatically changed the cultural and religious backdrop of Israel. It is no longer difficult to find grocers selling pork, and at Christmas there is an abundant selection of tacky Santas and plastic ornaments. The IDF is currently providing no small number of New Testaments at the request of Christian immigrants who prefer it to the Hebrew text for their swearing-in.

Russian Christians have created a new religious minority in Israel. Like any immigrant population the first generation has struggled to assimilate, but the second generation has been absorbed into the flexible definition of what it means to be Israeli. They speak Hebrew, watch Israeli television, serve in the Israeli Defense Forces (IDF), and marry other Israelis. Some have converted to orthodox Jewry but many have integrated socially while retaining their Christian faith. Though they are unaffiliated with Judaism, they do affiliate with the Israeli-Jewish culture and do not oppose Judaism’s place in public life. They are sometimes referred to by Israelis as the “non-Jewish Jews.”

For many of these “non-Jewish Jews,” serving in the IDF is an opportunity to prove their patriotism. The casualty rate for Russian immigrants is around three times higher than the norm because many of the immigrants volunteer for the more dangerous army units. In the Second Lebanon War, nearly one-quarter of those who received medals of valor were Russian-speaking immigrants and almost the same proportion received military burials.

Despite their patriotism, the Christian olim experience a certain level of institutional discrimination. Israel’s Orthodox Chief Rabbinate controls issues of “personal status,” such as marriage, divorce, and burial. There is no option for a civil marriage ceremony if citizens are not halachic Jews. They have to leave the country if they want to marry or use an approved Christian clergyman. Furthermore, non-halachic Jews are not supposed to be buried in Jewish cemeteries, even if they are IDF soldiers who died in combat.

The subject of Russian Christian immigrants in Israel is a sensitive one that most are hesitant to discuss because there are still many obstacles to overcome. But for a country that prides itself on its complicated ethnic makeup, Israel is certainly capable of finding that delicate balance that will protect the Jewish character of the state and still ensure the religious freedoms of this new Israeli Christian minority. After worshiping in a two-thirds Russian speaking congregation in Beer Sheva for several years I rejoice in the vibrancy the olim have brought to the Israeli-Christian community. Personally, I can no longer imagine an Israel without the extra cultural religious layer that the Russian immigrants provide. I have my ulpan classmates to thank that I still to this day speak Hebrew with a hint of a Russian accent.