West tries to bring Hamas into the peace process 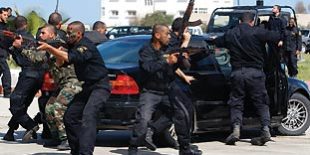 The Palestinian Authority said on Wednesday that it was worried about “attempts” by the US and EU to persuade Hamas to join the Middle East peace process.

The PA’s announcement came as Fatah and Hamas prepare to resume “reconciliation” talks next week.

In another development, a PA official said that Egyptian Foreign Minister Ahmad Aboul Geith and General Intelligence Chief Omar Suleiman may visit Ramallah on Thursday for talks with PA President Mahmoud Abbas on the future of the peace talks with Israel and efforts to end the Hamas-Fatah rift.

The two rival parties have in recent weeks expressed cautious optimism about the prospects of reaching an agreement that would end their dispute.

But despite the upbeat mood, the PA said that Hamas couldn’t be part of any political process because its main objective is to undermine and replace the Palestinian government in the West Bank.

Gen. Adnan Damiri, spokesman for the Fatah-dominated security forces in the West Bank, said that the PA leadership was deeply concerned about Western attempts to incorporate Hamas into the peace process.

“The Palestinian leadership has learned that the US officials are now studying the situation of Hamas the same way they studied the situation of the PLO in 1990,” Damiri said during a tour of Bethlehem. “Back then, the US used to consider the PLO a terrorist organization, as is the case with Hamas today.”

He said that the PA security forces recently seized many weapons belonging to Hamas in the West Bank, including rocket-propelled grenades and automatic rifles. “These weapons were not intended for use against the occupation,” he said. “They were being stored to attack the Palestinian Authority.”

In the Gaza Strip, meanwhile, Hamas Prime Minister Ismail Haniyeh renewed his call on Western governments to talk directly to Hamas. He said that such a dialogue was necessary so that the West could hear directly from the Hamas government about its positions and views.