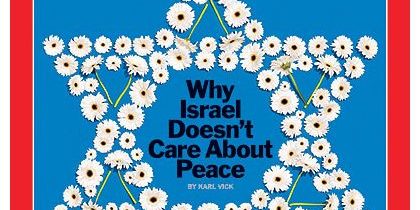 If you’re a reader of a certain age, you might understand the headline.

In May 1977, when Menachem Begin was elected Israel’s prime minister, Time magazine set out to describe the man, beginning with the correct pronunciation of his last name: “Rhymes with Fagin,” the editors explained, invoking the character from Oliver Twist. Modern Israeli leader; archetypal Jewish lowlife: Get it?

The magazine’s other characterization of Begin was that he was “dangerous.” A year later, he shared the Nobel Peace Prize with Egypt’s Anwar Sadat.

Maybe there’s something in the magazine’s DNA. This week, readers were treated to a cover story by Karl Vick titled, suggestively, “Why Israel Doesn’t Care About Peace.” That’s one way for Time to address the current state of negotiations between the Jewish state and its neighbors, which otherwise barely rate a mention in the article.

Mr. Vick’s essay draws on the testimony of a pair of real estate agents, a columnist for a left-leaning newspaper, and a few others to explain that Israelis are too blissed-out by the fruits of their economic prosperity to pay much attention to the subject of peace, much less whatever sad things may transpire among their neighbors in Ramallah and Gaza. “We’re not really that into the peace process,” says Gadi Baltiansky, a peace activist quoted in the story. “We are really, really into the water sports.”

It’s hard to say what to make of this, since the article concludes by contradicting its central thesis: “For all the surf breaks, the palms and the coffee, the conflict is never truly done, never far away,” Mr. Vick writes.

Indeed it isn’t: Nearly every Israeli has a child, sibling, boyfriend or parent in the army. Nearly every Israeli has been to the funeral of a fallen soldier, or a friend killed in a terrorist attack. Most Israeli homes and businesses come equipped with safe rooms or bomb shelters; every Israeli owns a gas mask. The whole country exists under the encroaching shadows of Hezbollah in Lebanon, Hamas in Gaza, and the prospect of a nuclear Iran. How many Americans, to say nothing of Europeans, can say the same about their own lives?

Yet when it comes to scoring cheap shots against the Jewish state, Time is not the sort of magazine to allow the obvious to disturb a prejudiced hypothesis. Can the magazine point to equally pointed cover stories about internal Palestinian affairs and what, perchance, they mean for the peace process? I checked: It last did so in April 2002 with a largely sympathetic portrait of Yasser Arafat “All Boxed In” by an invading Israeli army.

That’s a pity, journalistically speaking, because the stew of Palestinian politics tells us something important about the wider drift of the Arab world, not least the ways in which Iran has seized the mantle of anti-Western radicalism to make ideological inroads among Sunnis. But raising that line of inquiry probably asks too much of a magazine whose circulation is in steep decline, and whose journalism is now the subject of parodies in The Onion. (Recent headline: “TIME Announces New Version of Magazine Aimed at Adults.”)

Journalism aside, there’s also a moral dimension here, especially for a magazine that recently devoted its cover to the question of whether Americans are “Islamophobic.” That dimension is known as the delegitimization of Israel—the idea that the country ought not to exist. Insisting that Israel be wiped off the map, as Iran’s leaders do with such numbing frequency, is one method of delegitimization. Suggesting that Israelis don’t care about peace—not all of them, of course; there’s always a remnant of politically anguished Israelis to be found, quoted and celebrated for the purposes of native standing and moral cover—is another.

Which of these methods does more lasting harm, the malignly blunt or the well-meaningly insidious? Probably the latter: It shapes a climate of supposedly respectable opinion that doesn’t hesitate to tar one nation the way it never would any other. Or did I somehow miss the Time covers devoted to why Russians don’t care about democracy, or Kenyans about corruption?

Last week, a man named Karel de Gucht told a radio station in Belgium that the current round of Israeli-Palestinian negotiations were certain to founder upon the stubbornness of Jews. “There is indeed a belief—it’s difficult to describe it otherwise—among most Jews that they are right,” he explained. “So it’s not easy to have, even with moderate Jews, a rational discussion about what is happening in the Middle East.”

Mr. de Gucht sounds like a neo-Nazi; in fact, he is the trade commissioner of the European Union. How does a paladin like him come to say something like that? Because it’s really not that far from the sorts of things that already are being written; that are, as they say, “in the air.” Like the cover of a magazine that will someday cause a future editor of Time (assuming there is one) to hang her head in shame.