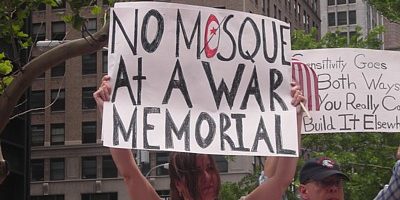 The source of the firestorm over the mosque at Ground Zero, Imam Feisal Abdul Rauf, could have located his mosque in New York anywhere he liked if he had not fixated on the spot two blocks north of Ground Zero. During a bitterly divided demonstration at the planned site on Aug. 22, retired firefighter Jack McLaughlin said: “Part of the (bombed) plane landed (here). There’s a mosque only four blocks away up Warren Street. So why didn’t they build … there?” (New York Daily News, Aug. 23).

As of this writing, Rauf has not wavered, despite the resulting national furor that has anguished and enraged opponents of the mosque, and, alarmingly, increased hostility toward American Muslims in general — including those who reject violent jihadism. Even if Rauf were to decide tomorrow to move the mosque/cultural center’s site, the deeply penetrating rage on all sides will take a long time to fade. As the imam’s partner and wife, Daisy Kahn, says, “We understand the pain and the anguish that has been displayed throughout the country” (ABC News, Aug. 23).

As someone affected for years — most threateningly as a boy — by anti-Semitism in this country, I can understand the anxiety of a considerable number of Muslims. That experience of hatred made me an outsider, with the Constitution as my Bible.

And the mosque in lower Manhattan is not the only one to come under siege. An Aug. 23 Washington Post report on unexpected resistance to a proposed Islamic center in Murfreesboro, Tenn. — before the eruption of the 9/11 mosque — where Muslims had “worshipped quietly” for more than 30 years, led reporter Annie Gowen to note that beyond Murfreesboro, “the intense feelings driving that (New York) debate have surfaced in communities from California to Florida in recent months.”

Accordingly, even the local Murfreesboro Islamic center stimulated evangelist Pat Robertson to speculate, in his inimitable manner, on his Aug. 19 television program whether “a Muslim takeover was imminent.”

That reminded me of Sunday-afternoon family car rides when I was a child, and my father stopped driving to calm down as the very popular the Rev. Charles Coughlin, a devoted anti-Semite, wondered aloud during his Sunday radio program how long it would take the Jews, who he claimed were already in control of Communist Russia and much of America, to take over our whole country. Meanwhile, in another result of Rauf’s fixation on building where so many American lives had been shattered by Osama Bin Laden’s assassins, Jonathan Weisman reported in the Aug. 23 Wall Street Journal:

“Islamic radicals are seizing on protests against a planned Islamic community center near Manhattan’s Ground Zero and anti-Muslim rhetoric elsewhere as a propaganda opportunity and are stepping up anti-U.S. chatter and threats on their websites.”

This news story quoted Jarret Brachman, director of Cronus Global, a security consulting firm, and author of the book “Global Jihadism,” as pointing out that these violent website postings “are not just al-Qaida linked but on prominent, mainstream Muslim chat forums.”

Evan Kohlmann, “an independent terrorism consultant” added: “We are handing al-Qaida a propaganda coup, an absolute propaganda coup” with the firestorm over Rauf’s mosque vision. Kohlmann’s job at Flashpoint Partners, where he works, is monitoring jihadist websites. He knows whereof he speaks — and worries.

Rauf, even if inadvertently, is not the only American propaganda provider to al-Qaida. There is Terry Jones, a pastor at a megachurch in Gainesville, Fla., the Dove World Outreach Center.

It was not from the debate over the Rauf mosque that this pastor, on his own, has declared that Sept. 11 be “an International Burn a Koran Day.” But after the jihadist threats following the New York mosque debate, Jones is nonetheless going ahead to actually burn a Koran on the evening of Sept. 11. The Fire Department refused to give him a permit, but the pastor is on what for him is a holy mission. Islamic radicals around the world will be very pleased at this glistening recruiting tool. They may toast the pastor.

In a significant article in the Aug. 18 Washington Post (“Mosque near Ground Zero? ‘It’s about the community, stupid.'”), Abed Z. Bhuyan, a Muslim and a graduate of Georgetown University who will be teaching English in Turkey next year as a Fulbright scholar, charges that this “is not a fight that ever really needed fighting.”

He cites and agrees with Anne Barnard, who complained in The New York Times that Rauf and Kahn, who say they’re so surprised at the baleful hurricane they have caused, “did not (first) seek the advice of established Muslim organizations experienced in volatile post-9/11 passions and politics.”

Adds Bhuyan: “If they didn’t expect this fallout, just how connected are Khan and Imam Abdul Rauf to the American Muslim community? … There is a difference between building a building and building a community. … If we are to grow as a community, we must demand strong leadership.”

As I recently reported, there are possible indications that Rauf himself may not have been all that surprised at the uproar and its results, if he himself is somewhat a jihadist. He did say on “60 Minutes” before all of this, that the U.S. was “an accessory to the crime” of 9/11. While on his State Department Mideast tour, Rauf’s reaction to the firestorm he created was (AP, Aug. 22) “that he took heart from the dispute over the mosque, saying ‘the fact we are getting this kind of attention is a sign of success. It is my hope that people will understand more.'”

Does this strike you as coming from an honest man — or a suave actor? What will the Muslim community say to this imam when he returns?

Do you think that Nancy Pelosi, so strong a supporter of the Ground Zero mosque, should investigate Rauf for igniting this conflagration?