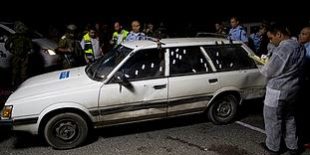 In response to Tuesday night’s shooting attack which killed four Israelis near Kiryat Arba, Defense Minister Ehud Barak said, “This is very grave incident. The IDF and Israeli security forces will do everything they can to capture the murderers. Israel will not allow terrorists to lift their heads and will exact a price from the murderers and those who sent them.”

The four victims, described by a settler spokesman as a couple who had been in a vehicle and two additional people who were hitching a ride, were driving on Route 60 near the entrance of Kiryat Arba when their vehicle came under fire.

Barak added that the attack “is likely an attempt by the low-life terrorists to prevent the diplomatic process and to hurt the chances of the talks opening in Washington.”

Barak was briefed on the attack by IDF Chief of General Staff Lt.-Gen. Gabi Ashkenazi and Shin Bet (Israel Security Agency) chief Yuval Diskin. Barak spoke with Prime Minister Binyamin Netanyahu who is en-route to Washington DC and updated him on the developing events. He also spoke with Deputy Prime Minister Silvan Shalom.

Tuesday night’s devastating shooting attack in the West Bank was believed to have been aimed at torpedoing the Israeli-Palestinian peace talks set to kick off on Wednesday in Washington DC.

The IDF was investigating two possibilities – that Palestinian terrorists had laid an ambush alongside the road or that the shots were fired from a passing car.

IDF troops immediately launched searches for the perpetrators and the Central Command decided to raise the level of alert out of fear that Palestinian terrorists will increas efforts to perpetrate attacks in the coming days with the goal of torpedoing the peace summit in Washington.

The four were two couples – one aged 25 and the other 40. One of the women was pregnant. According to eyewitness reports, the terrorists succeeded in hitting the passengers in their initial fire but then approached the car and shot them occupants at close range.

“When we arrived on the scene, all four doors of the car were open and four bodies were strewn on the road,” Magen David Adom paramedic Guy Ronen told The Jerusalem Post. “We saw that the vital organs had been struck by a very large number of bullets, and that there was no chance of saving their lives,” he added.

“It was a very difficult scene. We had learned to forget scenes like this in recent years,” Ronen said.

A ZAKA volunteer who arrived on the scene recognized his wife’s body. “We saw him crying at the scene and didn’t understand what was hapenning at first. It wasn’t the first disaster he saw,” his colleauge, Isaac Berenstein, told the Post. Then he shouted, “that’s my wife!’ That’s my wife!'” The volunteer was immediately removed from the scene by his colleagues and taken to his home in Bet Hagai.

The US labeled the deadly shooting Tuesday “a tragedy” while urging both sides not to take steps that would jeopardize direct peace negotiations set to be launched Thursday.

“Any time one human being takes out a weapon and fires and kills other human beings it’s a tragedy,” said State Department spokesman PJ Crowley following the attack, adding that the US still didn’t know the circumstances surrounding the incident.

“We are cognizant that there could be external events that can have an impact on the environment. We also are cognizant that there may well be actors in the region who are deliberately making these kinds of attacks in order to sabotage the process,” he said. “We are very aware that as we go forward in this process, not everyone sees this in the same way, and there are those who will do whatever they can to disrupt or derail the process.”

Following the attack, the Israel Police’s Operations Branch sent out an order to all officers in the Judea and Samaria district calling on them to increase their awareness and be on the look out for potential terror attacks, while maintaining security in the area.

Head of the IDF’s Civil Administration Brig.-Gen. Yoav Mordechai spoke with his Palestinian counterparts and updated them regarding the attack. PA security forces were also conducting their own independent investigation into the attack.

It was unclear if the attack was carried out by an established terror cell or if it was perpetrated by a small group of attackers that are not affiliated with a larger terrorist group.

While the IDF apparently did not have specific intelligence regarding the attack on Tuesday night near Kiryat Arba, there was a fear in Israel that terror groups would use the launching of the new round of peace talks to perpetrate attacks within the West Bank.

Ashkenazi and OC Central Command Maj.-Gen. Avi Mizrachi toured the West Bank earlier this week and met with brigade commanders. Ashkenazi asked the commanders to raise their level of vigilance for the duration of the summit in Washington out of fear that either Hamas, Islamic Jihad or even al-Qaida-affiliated elements will launch attacks against Israel.

The forces were also asked to avoid friction with the Palestinian civilian population and to demonstrate sensitivity at the crossings between Israel and the West Bank.