Faith Lessons: The country of the Gadarenes 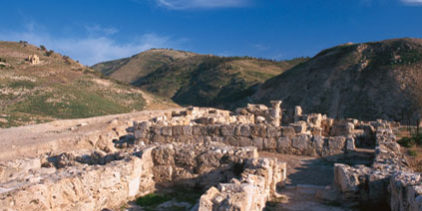 Healing of the Demoniac

Mark 5:18, “And when He got into the boat, he who had been demon-possessed begged Him that he might be with Him.”

A battered boat scraped ashore on the rough eastern coastline of the Sea of Galilee. Jesus and his disciples stepped wearily from their craft into the shadow of a steep hill and began a casual climb to a plateau of pastureland that overlooked the sun-splashed waters below. They had now crossed over into Herod Philip’s domain and were instantly outnumbered by the predominantly Gentile population who lived in Gadara, Gerasa, Hippos and seven other major cities—a “ten-city” region known as the Decapolis (Mark 5:20), but sometimes referred to as “the country of the Gadarenes” (5:1), which got its name from one of the larger cities near the lake—Gadara.

Before Jesus and his disciples had time to catch their breath from the ascent, a wild-eyed man bolted from his tomb-dwelling and raced towards the Master. His scarred wrists and arms, his raspy voice and his bare mangled body evidenced the presence and power of demons. Falling before Jesus, the man’s bloodied knuckles and black fingernails clawed at the dirt under Jesus’ feet in a tormented act of worship, for even demons know the presence of greatness. Knowing too the power of greatness and knowing their impending exorcism from the Gadarene, the “demons begged Him” (5:12) for mercy and received permission from Jesus to enter a nearby herd of two thousand pigs. Bewildered by their new masters of evil, the herd ran headlong down the steep hill to death by drowning in the sea below.

The keepers of the herd fled into town to report their financial calamity. Forgetting that one freed soul possesses infinite more value than mountains of pork or even hills lined with gold, the “whole city . . . begged Him to depart from their region” (Matthew 8:34).

The demons begged for mercy, fearing the power of Jesus. The city begged for a return to normalcy, fearing the presence of Jesus. But a third beggar feared neither. Freed from his torment the “wild man” sat peacefully at Jesus’ feet. Luke writes, “Now the man from whom the demons had departed begged Him that he might be with Him” (Luke 8:38).

Those of us who have been freed from Satan’s clutches know God’s power, and nothing could ever be more fitting than for each one of us to rejoice daily in the presence of God. To be with him. To live for him. To sit at his feet with opened Bibles and obedient hearts. And after we have witnessed his power, Jesus asks us to tell others what we have seen. “Tell what great things God has done for you,” Jesus commanded the demoniac in our story (8:39). We should do the same.

Today along the shoreline near the present-day ruins of Kersa in northern Israel, one can stand on a plateau that overlooks the deep-blue waters of the Sea of Galilee. You may see a boat tied up along the shore or discover one of many caves that dot the landscape, and you can easily reconstruct in your imagination that day long ago when Jesus arrived in the country of the Gadarenes to free a tortured soul.

May we never send Jesus away as did the people of the city. May we always long for his presence as did the demoniac, and may we freely tell others the great things that God has done in our lives.