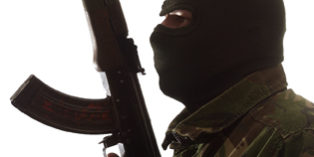 This is the first of six articles on the Islamic Invasion of America. The articles are excerpts from Dr. Booker’s new book, “Radical Islam’s War Against Israel, Christianity and the West.” All Americans need to be aware of how radical Islamists plan to destroy Israel, subjugate Christianity, and turn the West (Europe and the United States) into Islamic countries. Christians and Jews must take action to preserve our Judeo-Christian heritage and way of life. You can start by educating yourself about this most important subject. To get the full text, order this book directly from Dr. Booker’s web site at www.rbooker.com.

Where Were You When?

Where were you when …? The World War II generation of Americans asked this question about a sneak attack against America. It was December 7, 1941 when the Japanese attacked Pearl Harbor. President Roosevelt said it was a “day that would live in infamy.” It was certainly a day that changed the world. My generation of Americans asked, “Where were you on November 22, 1963”? That was the day Lee Harvey Oswald shot President Kennedy in Dallas, Texas.

Now the younger generation, and all Americans ask, “Where were you on 9/11”? We all know what they mean by this question, and most of us can tell where we were and what we were doing when we heard the news about radical Islamic terrorists hijacking planes and crashing them into the World Trade Center buildings. And while our government has made some changes regarding the security of our country, most Americans believe another attack is coming. It is not a matter of if, but when!

The radical Islamic threat to Israel and the Middle East has finally come to America. On February 26, 1993, Islamic Palestinian militants associated with the Hamas terrorist organization first bombed the World Trade Center in New York. Five people were killed and more than 1,000 injured.

All of a sudden, the American public awakened to the terrorist threat that Israel faces daily. The relatives of those who perished in the 1993 bombing demanded blood. The American congress introduced a bill that would deny members of Hamas visas to enter the country as well as deporting known members of Hamas. How ironic that we have been so quick to condemn the Israelis in their humane treatment of terrorists for over forty years while we want to kill and expel the terrorists after a single incident.

The Hamas organization is not a fringe Islamic sect. Their charter and terrorism represent the mainstream of Islamic fundamentalist thinking that is threatening to overthrow Arab governments, annihilate Israel and humble the West. They have established an extensive support network in the United States to aid its reign of terror around the world.

The attack on the World Trade Center in 1993 was only a dress rehearsal for the horror that would come later. As the whole world knows, on September 11, 2001, radical Islamic fundamentalists hijacked four planes. Two of these planes were flown into the towering twin World Trade Center buildings, which represented the financial heart of America. Many thousands of innocent people were murdered, and the buildings were completely destroyed.

The terrorists hijacked a third plane and flew it into the Pentagon, the headquarters in Washington D.C. for the American military. Hundreds more were killed. If that was not enough shock for us all, the terrorists hijacked a fourth plane but failed to reach its target. The courageous passengers on the plane forced the plane to crash in the woods of Pennsylvania. Analysts have speculated that the hijackers wanted to crash the plane into the White House.

While Osama bin Laden is blamed for this horrific act of terrorism, there is no difference between any of these terrorist groups. No matter their name, Hamas, Al-Qaeda, Hezballah, Islamic Jihad, Al-Aksa Brigade, the Palestinian Authority, etc., they all have the same goal to destroy Israel and America. And while we should all sympathize for the desperate conditions of the self-proclaimed Palestinian Arabs, we must remember that they elected Hamas as their government.

I say self-proclaimed Palestinian Arabs because never in history has there even been a “Palestinian People.” By electing Hamas to represent them, they have voted a terrorist group to lead them in their fight against Israel. The only difference between Hamas and the so-called moderate Palestinian Authority courted by the U.S. Statement Department is how to best eliminate Israel.

The American government has declared this attack to be an act of war and has promised to destroy the bases and infrastructures of terrorists wherever they may be found. This is a just but difficult goal as we have discovered in our attempt to capture Osama bin Laden and his Al-Qaeda terrorist group as well as in the war with Iraq. While only the Almighty knows the outcome of our war against terrorism, one thing we mortals can know for sure is that the world will never be the same.

Dr. Richard Booker is a bestselling author and speaker and the Founder of Sounds of the Trumpet and the Institute for Hebraic-Christian Studies. He is a contribution editor for the Jerusalem Connection. To learn more of his work, see his web site at: www.rbooker.com.