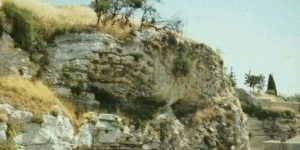 Mark 15:22, “And they brought Him to the place Golgotha, which is translated, Place of a Skull.”

When referring to the place of Jesus’ execution, three of the Gospel writers use the term “Golgotha,” meaning “skull” or “head.” Many possible explanations have been suggested for the use of this term; for example, bare rock protruded form the site; a cemetery stood nearby; the site resembled a skull; the remains of human skulls had been unearthed there; or (my favorite) the Romans used the site as a customary place for executions and it came to bear that eerie name.

In any event Golgotha teemed with a diverse assortment of faces and feelings that bitter-sweet day so long ago just outside the city gate of Jerusalem where Jesus suffocated on a Roman cross for the sins of men. Three beaten prisoners—only two deserving of death—stumbled upon the site, leaving a trail of blood in the rocky soil beneath their early morning shadows.

Five soldiers practiced their gory craft and then, “sitting down, they kept watch” over the two guilty men and the guiltless Good Shepherd in much the same way that a small band of shepherds “ watch over their flock by night” just six miles to the south in Bethlehem some thirty-three years earlier at the time of our Savior’s birth (Matthew 27:26; Luke 2:8).

Women stood near the cross as well, including Mary from Magdala who had been delivered from demons by Jesus; the mother of two of Jesus’ closest disciples, James and John; and Mary, the mother of Jesus, who felt, like no other, every painful breath of her dying son.

Only one of the twelve disciples found his way to the cross, braving the potential threat of arrest and punishment for his personal association with the crucified King. Fixing his wearied but loving eyes first upon his own mother and then upon John, Jesus challenged John to look after her. Mary’s remaining surviving children did not yet share her belief in Jesus as the Messiah and apparently shut her out of the family network for her unorthodox views.

Today in the Old City of Jerusalem stands the ancient but stately Church of the Holy Sepluchre, which memorializes not only the burial site for Jesus, but also the site of his execution. Although once outside the city walls, the church now finds itself surrounded by the rough stone ramparts of the Christian Quarter with its narrow streets and pushy merchants selling crosses, beads and postcards. Inside the light-starved rooms of the church, priests and pilgrims seek to connect with the memories of Golgotha—the beaten men, the soldiers, the mocking strangers, the women and the lone disciple, John. But ultimately they hope to connect with Jesus, their Savior, the crucified Son of God, who accepted the shame and suffering of crucifixion that all who believe in him might be delivered from their sins.

What a glorious message that “God demonstrates His own love toward us, in that while we were still sinners, Christ died for us” (Romans 5:8)!